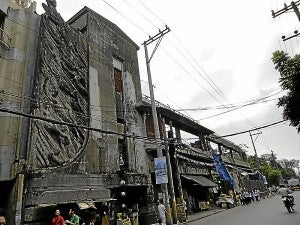 “It’s like making a copy of an Amorsolo [painting] and then destroying the original Amorsolo,” a heritage conservationist described the fate of “The Furies” of Italian sculptor Francesco Riccardo Monti.

The 9.5-meter bas-relief at the old Meralco building in Manila’s Ermita district, the biggest sculpture made by Monti in the Philippines, is set to be dismantled after the Manila City Hall reissued in June the suspended demolition permit for the structure.

Incidentally, this year marks the 125th birth anniversary of Monti and the building’s architect, National Artist Juan Arellano. Through Arellano’s invitation, Monti came to the Philippines in 1930 and stayed in the country for 28 years.

Monti and Arellano, who was then a supervising architect for the Bureau of Public Works, collaborated on numerous buildings, notably the Metropolitan Theater, another heritage building in Art Deco style, which is in a dilapidated state.

One of the heads of Monti’s “The Furies” was cut off when a cast was made to replicate the sculpture. Architect Wilkie de Lumen of the National Historical Commission of the Philippines (NHCP) said the plan was to make a replica to be installed at Adamson University, which was part of the original Meralco compound, because an engineer assessed that the cement sculpture was already brittle.

“There was no assurance that it would not crumble when dismantled and transferred to another location,” De Lumen said. “It is better to reconstruct than to do nothing at all.”

Ivan Henares, president of the advocacy group Heritage Conservation Society (HCS), said the incident “highlights the need for greater sensitivity and the need to raise the standards of conservation methodologies here in the Philippines.”

Henares added that conservation work should be handled by qualified professionals.

“Members of [HCS] observed that the release agent used may have been insufficient. So the plaster used to make the mold seeped into the face of the sculpture,” Henares posted on his Facebook page. “The only recourse to release the mold may be to destroy the parts that are sticking to the mold, which is what’s happening now.”

A laborer at the site told the Inquirer that when they were making the cast, they had to cut off the head and the arm, which extend from the rest of the sculpture because it was too high.

“[Monti’s] works represent not only an individual’s achievement but also a significant phase in the production of large-scale and outdoor sculptures in the Philippines in the first half of the 20th century,” said professor Ma. Victoria Herrera, curator of a 2005 exhibit of Monti’s works at the University of the Philippines-Visayas, as quoted in the Iloilo-based newspaper The News Today.

Some of Monti’s works are the sculptures atop the University of Santo Tomas main building in Manila, the cast of St. Dominic de Guzman at Sto. Domingo Church in Quezon City, the bas-relief at the doorway of Iloilo City Hall and the statue of a carabao with a woman holding a sugarcane stalk in Bacolod City.

The HCS has petitioned the owners of the old Meralco building on 826 San Marcelino Street  to conserve Monti’s sculpture and maintain the facade when demolition work started in February last year. Wilson Cham, president and general manager of Greenville Realty Development Corp., has bought the property. A McDonald’s fast-food outlet was to be built in its place.

“When the owners talked to us, they asked us what to do and we suggested adaptive reuse. Give the building a new use but maintain the facade. Understandably, the building is run-down, but the bas-relief is not. So why remove it?” Tats Manahan, HCS vice president, told the Inquirer.

Because of the concerns raised by heritage conservationists, the demolition permit issued by then city building official Melvin Balagot was suspended. Balagot signed another demolition permit on June 7 this year, a few weeks before the new set of elected officials came in.

“This is privately owned by the Cham family. It is now the prerogative of the owner since it was not declared a national heritage. Plus, the building was already condemned by the city building official,” De Lumen told the Inquirer.

De Lumen said the original sculpture would be removed in segments and the “remnants” would be turned over to the NHCP, which is still looking for an area to reinstall the sculpture.

The Cham family, NHCP officials and representatives of One Meralco Foundation, which has offered to assist in the conservation, met in February and agreed that Meralco would facilitate and fund the replication of “The Furies.”

Manahan said a contractor had made a proposal with the proper methodologies to conserve the sculpture, but it will cost almost double than the chosen proposal to just cast and replicate.

“We worked on its conservation for one and a half years. As Filipinos, it’s ours. Even if you bought it, it’s part of the heritage that belongs to Filipinos. It’s sad that not everybody sees it that way,” Manahan said.