Two brothers and a lot of cocktails | Lifestyle.INQ ❮ ❯ 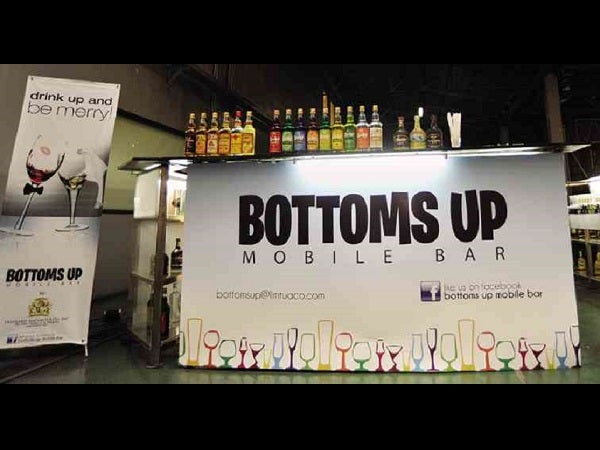 Two brothers and a lot of cocktails

It’s 3 P.M. on a hot summer day and there are already nine cocktails in front of us, an intoxicating mix of light and fruity drinks and creamy concoctions. Behind a makeshift bar in the middle of the room, Clifford Limpe-Aw is making more.

“It’s OK, just take a sip of each,” his brother Aaron says, after hearing us joke about leaving the interview drunk. We grab the Paloma, their refreshing tequila and grapefruit mix, which quickly became our favorite—the first of many favorites that afternoon.

It is work, yes, but it also feels like our very own private session with Bottoms Up, the mobile bar the siblings have been running since 2008.

It shouldn’t surprise people that Aaron and Clifford decided to take the plunge into the bar catering business. After all, their family owns Destileria Limtuaco & Co. Inc., the oldest distillery in the Philippines.

Five generations of their family have overseen Destileria Limtuaco, which has been producing distilled spirits, brandies, gins, rums, vodkas, tequilas, cocktail mixes and wines for over 160 years. Aaron and Clifford belong to the sixth generation and they are continuing their family tradition in their own way—by using their company’s spirits to create cocktails and serving them at parties and special events.

This was something they did even before they officially started their mobile bar business. “Friends would ask us to bring drinks to parties so we’d bring them and mix,” says Aaron.

Years later, after realizing that there was a demand for mobile bars, they decided to start their own. “Clifford was really into it before pa, he had a few go-to mixes using our products. But when we decided to start the business, he studied bartending in Hawaii, at The Bartending Academy of Honolulu.”

Says Clifford: “I learned the basics, the techniques. I used to base my measurements on shots, now I use ounces. Making cocktails is all about the measurements.”

He then returned to the Philippines and started developing more mixes using Destileria Limtuaco’s products. He also trains bartenders in other countries including Hong Kong and Sweden.

Bottoms Up’s first clients were their friends and college organizations. Then, later on, they started bringing their bar to weddings and big parties. In the beginning, the brothers ran Bottom’s Up independently. Then, last year, it officially became a part of their family company.

Bottoms Up provides bartenders, a bar setup complete with flowers and décor, and their client’s chosen cocktails and shots. The number of bartenders and the bar layout depend on the number of people who will be at the event.

The rates start at P15,000 but Aaron stresses that prices are negotiable.  “It will depend on the cocktails and shots they choose. If some people want more shots, we can customize the package. But we really like doing cocktails. We always encourage for them to do a tasting,” he said.

And that’s exactly what we are doing. We try the Mango Ginger Mojito which has a strong kick, their Apple Mint Splash which is light and refreshing, and the Strawberry Basil Cosmopolitan which also becomes one of our top picks. “We use herbs from our mom’s garden at home,” says Aaron. “That’s where we get our basil and mint.”

Lava Flow, their version of piña colada which they make using real coconut milk, is another big winner. Virgin Killer, a crazy but delicious mix that includes vodka, tequila, rum and gin, is also one of their signature drinks. We also love Mabuhay Manila, a cocktail that uses mango rum, pineapple, orange juice and grenadine, and their Mango Strawberry Daiquiri.

They can also create drinks to fit an event’s theme. “For an Asian Dragon event, we did Chinese-inspired drinks,” says Aaron. “We worked with lychees to create an Almond Lychee Cooler, we did our Plum Whiskey Green Tea. We incorporated Asian flavors into our drinks.”

What sets them apart from other mobile bars? Aaron says, “We create specialty drinks. We also do frozen margaritas. It’s not the typical red drink, blue drink. Parang bar talaga—you order a drink, you watch the guy make a drink. And our bar is state-of-the-art. We don’t want naman na after they drink, we take their glasses and wash it in a balde sa side. Our bar has running water.”

The two wish their clients would be a little more adventurous in choosing drinks. “People usually order the drinks they know. If we have a menu— like Rum Coke, Vodka 7Up, Virgin Killer and Mabuhay Manila —people would usually order the Rum Coke and the Vodka 7Up, the things they are familiar with,” Aaron says.

Clifford adds, “We wish they’d get the cream-based ones like the Banana Cream Pie and Mint Choco Ice Cream.”

We try both cocktails and they are delicious. Banana Cream Pie reminds us of Chunky Monkey, our favorite Ben & Jerry’s Flavor, while Mint Choco Ice Cream makes us feel like we are eating those delightful Andes chocolate mints.

Aside from running Bottoms Up, Clifford and Aaron also work for Destileria Limtuaco. They created Amadeo Coffee Liqueur. “That’s our product, we did the research and development,” Aaron says. “Amadeo Coffee Liqueur is an all-natural liqueur that uses four kinds of Philippine coffee. No flavor added.”

Interestingly, while the two are in the drinks business, they don’t drink a lot. “Clifford gets allergic so he doesn’t drink much. I don’t either,” Aaron says.

But when they do drink, they both go for rum.

Aaron says, “I like drinking the tropical ones we do—the rum mixes. ’Yung rum kasi nung company, that’s what I usually drink. If I was going to make it myself, I’d make myself a mojito.”

Clifford says, “I usually just go for a Rum Coke. Something easy lang. It’s not fun kasi to mix your own drink and drink it the whole night. I go for the simple ones. But if it’s mixing for girls, then that’s something else.”

As if we haven’t had enough alcohol that day, we perk up when we hear Clifford mention a cocktail that tastes like bubblegum. They call it Blue Sapphire and he mixes one for us. It is delicious, too—the perfect cocktail for bubblegum-loving adults.

Before we leave Destileria Limtuaco, we talk about how fun it must be to keep trying to come up with new cocktail flavors.

For inquiries, call 0922-8563535 or e-mail [email protected] You can also find Bottoms Up on Facebook: www.facebook.com/bottomsupmobilebar.