“This is a portrait of my partner Courtney, who has tolerated a man who plays with Lego bricks all day for a ridiculously long time,” read a note that was pinned below one of Nathan Sawaya’s artworks at the Discovery Times Square in New York.

And it’s true. Nathan does play with Lego bricks all day, but he doesn’t just play. He uses them to create breathtaking masterpieces that have been seen by thousands all over the world in his many touring exhibits.

His biggest and most recent exhibit opened last month in his hometown New York. He said, “Having my largest exhibition in New York City is a dream come true.”

It isn’t just Nathan’s biggest exhibit, it’s also the largest solo display of Lego art ever, a major feat for a man who turned his back on corporate law to play with his beloved bricks.

For this exhibit, Nathan used thousands and thousands of bricks to recreate some of history’s most memorable and iconic artworks. He used 983 pieces in his version of Da Vinci’s “Vitruvian Man”; 3,991 pieces to make Edward Munch’s “The Scream”; and 18,893 bricks to make a 3D version of Gustav Klimt’s “The Kiss.” It took 4,573 bricks to create his own Lego “Mona Lisa” portrait; 1,948 to copy Rembrandt’s self-portrait. Vincent Van Gogh’s “Starry Night”? 3,493 pieces. Katsushika Hokusai’s “The Great Wave Off Kanagawa”? 2,877. Nathan had his own versions of Chartres Cathedral’s North Rose window (he used 17,482 bricks to create that magical stained-glass effect); The Parthenon (30,210 bricks); Michelangelo’s “David” (16,349); and “Venus de Milo” (18,483). His recreation of the Moai, one of the monolithic statues of Easter Island, was a commanding presence. It was made from 75,450 bricks.

But it wasn’t just his recreations of famous artworks that were impressive. His own works—from his self-portraits and loving tributes to Courtney to his exploration of the human form—are captivating.

Most compelling to us was the 15,161-brick piece he called “Hands,” which show a male figure with shattered hands. Nathan said, “This piece is literally my nightmare. My hands are my most important tool.”

Although the exhibit was revealing and, in a lot of ways, gave you an intimate look at Nathan’s psyche, it was also playful.

To thank kids who have shown appreciation for his work, Nathan built a massive dinosaur skeleton using 80,020 Lego bricks. And judging by the little boy jumping up and down in front of the T-Rex and shouting “Eat me! Eat me!” it was an expression of gratitude that was well-received.

In this exclusive interview with Super, Nathan talked about his passion for art, his inspirations, and how his parents’ refusal to get him a dog set him on a path to becoming a brick master.

I use Lego bricks to create contemporary art because they let me create anything I can imagine. The possibilities are endless. As an artist, I wanted to elevate this simple childhood toy to a place it has never been before: into the art galleries and museums. I appreciate the cleanliness of the Lego brick. The right angles. The distinct lines. As so often in life, it is a matter of perspective. Up close, the shape of the brick is distinctive. But from a distance, those right angles and distinct lines change to curves. That is what drew me to the brick. I like using the bricks as a medium because I enjoy seeing people’s reactions to artwork created from something with which they are familiar. My favorite thing about using Lego bricks is seeing someone be inspired by my artwork to go and pick up a few bricks and start creating on their own.

Like most kids, I had Lego bricks growing up. I have lots of fond memories playing with Lego with my sister and creating stories that went along with our adventures. But the biggest turning point, let’s call it an “aha” moment, was when I was about 10 years old. I asked my parents if I could get a pet dog, and when they did not get one for me, I created a life-size dog for myself out of Lego bricks. It was then that I realized I can build anything out of this toy.

What was the first Lego sculpture you created?

When I was five years old I got my first Lego set and I immediately tore it open and built a small house. Years later, as an adult, I looked back at this childhood toy as an art medium. When I started to sculpt with Lego bricks as an art medium, my first piece was a 5-foot-tall, black and white self-portrait.

Tell us about the special pieces you worked on for the New York exhibit. We love the Liberty with the exposed heart—we thought it was beautiful.

Thank you. A majority of the sculptures in this exhibition are new. I am constantly updating my work, and trying to push the boundaries of Lego as an art medium. Part of this new exhibition includes some replicas of very famous works of art from the past. I wanted to inspire visitors to the exhibition, and part of that includes using the master works of the past, but doing so through a very familiar medium: Lego bricks. 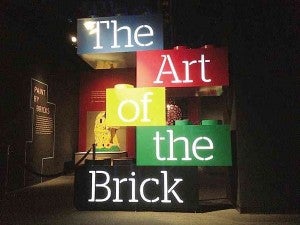 How did you decide which artworks to recreate for the Paint by Bricks and Sculpture Garden part of the exhibit?

Which of your sculptures are closest to your heart?

It is difficult to choose a favorite. I am most excited about the next one I am working on, but you will have to wait and see what that will be. I think the most iconic sculpture in the exhibition is a piece titled “Yellow” which depicts a human figure tearing his chest open while thousands of yellow Lego bricks spill out around him. This piece really resonates with people. It has become part of pop culture. People really relate to the messages of opening oneself up to the world, while also appreciating the inner struggle of the figure. When people see “Yellow” in person for the first time, they often have a strong reaction to it. And many of those people also ask me how they can get their own version, so that is why I have set up the Lego Cuusoo page. If it receives 10,000 supporters, then Lego will begin the process of making it into a real kit. Here is the link: http://lego.cuusoo.com/ideas/view/17353

How long does it usually take you to create a sculpture?

It depends on the size and complexity of the pieces. A life-size human form is going to take two to three weeks to complete.

We’re curious about your studio. Where do you create your sculptures?

I have art studios in New York and Los Angeles. Each studio has millions of bricks.

What is the most challenging part of your process?

Coming up with the idea.

And which part do you enjoy the most?

Have you heard from the makers of Lego?

I have a great business relationship with the Lego Group. I buy all of my bricks, so I am a very unique customer in that I buy hundreds of thousands of bricks monthly.

Do you ever find yourself limited by the available colors of Lego bricks?

No, I enjoy using the palette of Lego colors. In fact, having a limitation forces me to find a more creative solution which benefits the work in the end.

Our eyes were drawn to the pearl earring you used for the “Girl With A Pearl Earring.” Where was that piece from?

I believe it is a “crystal ball” element from one of the Harry Potter sets. For the most part I only use the traditional rectangular bricks, but every once in a while I need a special element for a particular piece.

Your portraits of Courtney are also among our favorites. How does she feel about them?

Courtney is my wife, and she is also my muse. I have not done an exhibition without a “Courtney” in it somewhere. Fortunately, she likes the work.

Inspiration comes from many places and people. I am inspired by people I’ve met, locations I have traveled, and something as simple as a tree. Sometimes I’ll have an inspiration, idea or morsel of an idea—but it will take years for the concept to develop and come to fruition. Also, I live in New York City, and when I get stuck, I’ll take a walk and it usually leads to some sort of creative vision.

When I first started out, I was motivated by an art book of Tom Friedman’s. I was blown away by his fabulous sculptures created from household items. I would stare at this book for hours and let my mind wander. Recently I authored my own book to inspire others (“The Art of Nathan Sawaya”). I put together a collection of photos of my works over the past few years with hopes that kids will read it and be inspired to become artists themselves.

Do you have tips for aspiring Lego artists?

There are no rules to art, so use your imagination to create whatever you can think of.