A quick Sagada sampler–who would have thought this is a food destination? | Inquirer Lifestyle ❮ ❯ 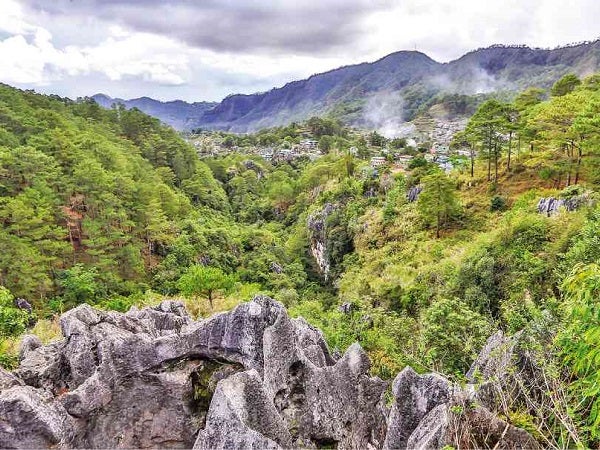 A quick Sagada sampler–who would have thought this is a food destination?

Nestled high in the Cordillera Mountains is the small, sleepy town of Sagada. It’s funny that, despite its size and remote location, it is a popular destination for tourists and extreme sports enthusiasts.

Getting to Sagada is actually an adventure in itself. It starts with a nine-hour bus ride to Banaue, Ifugao, where you switch to a minivan for a 2.5-hour ride to Bontoc, the capital of Mountain Province.

From there you jump on a jeepney for the final 45-minute ride to the town proper.

The trip up, despite the length, was actually not that bad. We left the Ohayami Bus Terminal in Sampaloc, Manila, around 10 p.m. so I slept most of the way, waking to the warm sunrise in Banaue.

The van was a different story—it was packed, as they tried to fit 12 people in a Toyota Hi-Ace, bags and all.

The jeepney ride was the most interesting part of the trip, as I joined several locals atop the vehicle for what they call “top loading.” Riding with the cool mountain air in your face is a must-try for anyone who plans to go up there.

Sagada is a municipality in the Mountain Province approximately 275 km north of Manila and 140 km from Baguio, hence the long trip.

There are two routes from Manila to Sagada, the first via Baguio. Several bus companies ply the Manila-Baguio route, from where you can get a jeepney to Bontoc, then to Sagada.

The second route is via Banaue.

The fare in Ohayami is P450 for a one-way ticket to Banaue.  Transportation from Banaue to Bontoc is P150, but be careful, as some may try to overcharge you.  The final leg to Sagada costs P50.

If you decide to drive up, it will take eight to nine hours if you leave Manila around midnight.  Most of the road is paved, except for a few spots along Dalton Pass, where there is an ongoing road construction that allows only one lane to be used by motorists.

Almost all of the inns are in or around the town center. Lodging can be a little austere.

The day I arrived must have been a busy weekend, as there were many people going up and down the main street. Many of the inns I visited were full, but I was lucky to get a room at George’s Guesthouse, which apparently is one of the more popular lodgings in Sagada. A friend smirked, noting that with a firm bed, private bathroom, hot water and Wi-Fi, it was hard for me to say I was “roughing it,” and it was a deal at P350 a night.

Other more popular accommodations include Residential Lodge, on the main road leading to the town center, which you need to book early as rooms go fast. Rooms are similar to George’s Guesthouse. It has a small communal living room and dining area.

Rock Inn is outside town, precisely 3 km from the town center.  It’s perfect for big groups or those who want privacy. They have a big dining area that can accommodate at least 50, but it’s a long walk from town, so have a vehicle at your disposal, unless you like hiking.

Masferre Inn and Restaurant was named after the famous photographer from Sagada, a favorite for those who want a cozier environment. All rooms have private bathrooms and are tastefully decorated with a country home theme. Of course, that luxury comes at a price, which is normally double or triple the other inns, depending on the season.

Almost everything is walking distance, so no real need to rent a vehicle.  Unfortunately I was staying for only one night, so I had to plan my trip to the minute.

I started hiking with my guide Webber in search of the famous hanging coffins in Echo Valley, which took about 10 to 15 minutes. From the viewpoint, I could see the town of Sagada with the pine trees and limestone rocks in the foreground, and the rice terraces in the background.

Webber pointed to a small limestone rock face that could be seen through a break in the tree canopy, where the hanging coffins were located. I smiled and asked him, “Kaya? (Can we go there)?” With a confirming nod, he proceeded.

(The hike back to town is not for the faint of heart. Even on a trail, I was clinging to branches and limestone formations. Bring a trekking pole.)

Every place has its unique traditions, and burying the dead is one of them. As I looked up, I could see several coffins hanging on a rock face. The place is very serene, and it’s hard not to be respectful.

I also wanted to test if the place really deserved its name, Echo Valley. It does. I guess it has something to do with the way the valley is shaped, and the many rock faces surrounding us.

After about 30 minutes, with a big sigh we started back. Surprisingly we reached town with plenty of time to try and do a sunset shoot, but it started to rain heavily, so I had to call it a day.

For those with the opportunity to stay more than one day, local guides suggest a number of activities, ranging from the easy to the extreme.

Caving, or spelunking as it is sometimes known, is normally at the top of many lists. Sagada has two caves, Sumaguing and Lumiang, both of which require that you get a guide from the local association.

For those who like to hike, popular destinations include Bomod-Ok Falls, Mt. Ampacao and Echo Valley. There are plenty of routes, so just inform your guide of the level of difficulty you want to maximize your experience.

Photographers cannot miss the sunrise at Kiltepan. If you are familiar with the sea of clouds seen on Mt. Pulag, this is a small version of it.

And for sunset, nothing beats the view at Lake Danum.

Schedule your hike to Mt. Ampacao in the afternoon so you can make this your exit point. If you start around 1 p.m., a leisurely walk should get you to the lake in plenty of time to set up for the sunset.

One of the other things Sagada is known for is food. Who would have thought that this small town up in the Cordilleras is actually a food destination?

My first stop for lunch was the Masferre Inn and Restaurant. The main dining area was big and reminiscent of an old log cabin. It was a little dim, with most of the light coming from the windows, but there was enough for me to see Eduardo Masferre’s pictures lining the walls.

Masferre, a native of Sagada, documented the lives of the native tribes of the Cordilleras from the early 1930s to the ’50s. The old images really put in context what life in the Cordilleras was like long ago, and made me wish I was with him during his travels.

Masferre Inn provides a good mix of local and international fare, like the other dining establishments in the area. This is probably one of the reasons so many foreigners like it here. My first meal was a cheeseburger with a side salad; the meat was lean and the greens very fresh.

You cannot say you’ve been to Sagada without trying the yoghurt at the Yoghurt House. It is homemade, so it’s really thick and creamy. You can get it plain, with fruits, or with crushed granola. Prices start at P85, which is a little steep for the area, but well worth it.

The Yoghurt House actually also serves full meals for breakfast, lunch and dinner. It can get full; visit during odd hours.

Other must-try places include Lemon Pie House, named after a recipe perfected over 12 years by Joseph Daoas and handed down from his mother. Its secret is using lemons grown in their backyard.

Opened in 2008, Lemon Pie House serves breakfast, lunch and dinner. It is roughly 10 minutes away by foot from the jeepney terminal. A lemon pie costs P180 or P25 per slice.

Coffee Bana Café is the perfect place for coffee lovers. Arabica and Robusta blends really pack a punch, and for P30 they beat any coffeehouse in Manila.

For the adventurous, the alamid coffee, made from the droppings of civet cats, which are abundant in Sagada, is the way to go. It is not as strong as other blends, but it has a unique, sweet, chocolate-like taste that every coffee lover should try at least once in his life, even if it costs P200 per cup.

Preparing for a trip to Sagada is no different from preparing for other trips.  Light clothing that is quick to dry and easy to pack is the best. Those convertible Columbia cargo pants can be quite functional, and a light jacket is a must, as the weather changes pretty fast and it gets a little cold at night.

Hiking shoes, not sneakers or slippers, are preferable, and bring your medicine and enough cash, as there is only one ATM in town.

If you want more information about visiting Sagada or Banaue, please send your questions to [email protected]