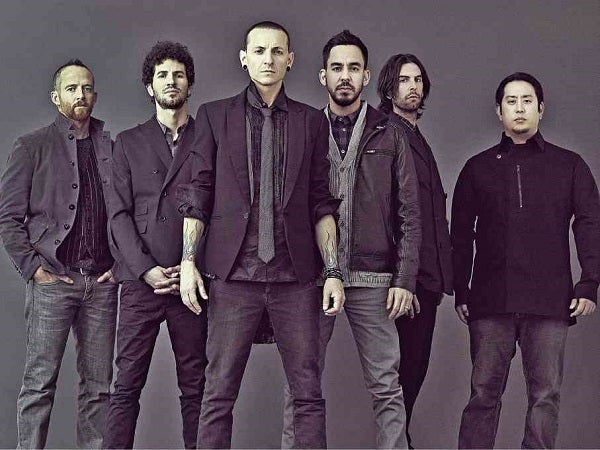 It’s been nine years since Linkin Park first knocked the socks off Pinoy fans with its searing, angst-filled brand of rock. The Grammy-winning group first played in Manila in 2004 for its “Meteora” tour, back when it was still enjoying its status as the nü-metal band of the new millennium.

“We really enjoyed being there—the crowd was great, and it was kind of like a new experience for us to be that far away from home,” vocalist Chester Bennington recently told Inquirer Super in an exclusive phone interview, done while the band was recording its yet-untitled sixth album in California. “We’re actually looking forward to getting back there for quite some time.”

This Manila leg is part of the band’s tour promoting its fifth studio album, “Living Things,” released a year ago.

From the radio-friendly debut single “Burn It Down,” to the sonically aggressive “Lies Greed Misery,” the “Living Things” album serves up singles that are reminiscent of the cathartic, rap-rock/screamo hybrid anthems of old, but with a decidedly electronic finish.

For Bennington in particular, 2013 appears to be a very busy year. Apart from gearing up for the “Living Things” world tour, he has his hands full with his latest stint as Stone Temple Pilots’ (STP) new lead singer. Following Scott Weiland’s controversial split from the ’90s band, Bennington made his surprise debut with STP at Los Angeles radio station krOQ’s Weenie Roast festival last May, performing a brand-new track, “Out of Time,” that he had written with the remaining STP members.

Your debut as STP’s new frontman at Weenie Roast just came out of nowhere. How did that happen?

Well, unfortunately the band had to make some hard choices in order to move forward. After they’d let Scott go, I got a call from two of our crew who work with them as well, and they asked if that would be something I’d be interested in. Apparently, they’ve been talking to the other guys at STP about who would be a good replacement, and my name came up; I believe I was the only person that they asked. (Laughs) So that’s kind of how it came together. Once we decided to do that, within four weeks we had written a handful of songs and recorded “Out of Time,” and we played a couple of shows.  We turned that around really quickly.

Wow. Was it hard to keep it under wraps for that long?

It was. It was actually very difficult… We’d be playing and writing some music, and after about six to seven hours, we’d get hungry. We’d be like, “Let’s go get some food!” and when we’re ready to leave, we’d realize, “We can’t go, we have to order in because we can’t be seen together.” It was pretty hard for us not to tell anybody, to keep it a secret from our friends. But it was really worth it.

How much creative input or control did you have in writing “Out of Time” and your other songs?

It’s basically the same as Linkin Park. We all get in the room and write together; I have free rein to do and contribute as much as I wanted.

It’s inevitable that people will give you flak for filling in Scott’s shoes. How have you been dealing with the backlash so far?

I take it with a grain of salt. I understand that anytime something new [comes up], people are gonna have some reservations about it, especially with a band like STP because it’s really big and well-known and it has been around for a long time. And Scott is a great frontman…  In his time, he was arguably one of the best in the world; he is an inspiration for me and I have great respect for him. So, I wanna make sure we write music that’s good and lives up to what he’s done in the past.

But when it comes down to it, it’s kind of similar with Linkin Park. Every time we put a song out, there are people who will love it and hate it and talk about it, but it’s worked out for us so far. You try not to pay too much attention to outside influences when you’re creating something.

How does your new stint figure in the future of Linkin Park?

One thing that was really important to be clear when I decided to work with STP was that Linkin Park is my top priority, that the things we do in STP can’t change the course of what we do in Linkin Park. And the guys are fine with that. They’ve kind of been in positions where they have to work around certain things that they really don’t have much control over. (Laughs) With this kind of thing, there’s control over it. We understand when we could write and tour, and we understand when we couldn’t.

How about Dead by Sunrise, is it still alive? You’re gonna be juggling that, too, right?

I wouldn’t be surprised if there’s gonna be another Dead by Sunrise record. That one’s a little trickier, ’cause there are a lot of moving parts in that one and we also don’t really have the same kind of freedom that we have in Linkin Park and STP. It takes a lot more to get that machine moving… I’ll figure it out. (Laughs)

You’ve described “Living Things” as feeling like you’re in more familiar territory. Do you think you’ve gone back to your “Hybrid Theory” roots, or are you still evolving or experimenting as a band?

We’re always experimenting and pushing ourselves creatively. I think, for us, on “Living Things,” we got to a point where we intentionally stopped doing some of the things that we felt were kind of putting us in a little box. We really wanted to get away from those things, and I think we all pushed that.

I really don’t think people see us as a nü-metal band anymore. Once we got past that, it was like, now we can go back to doing some of the things that we really liked. We now have the tools to make it, and we can make it the best that it can be. We were comfortable to go back to some of that a little bit, but we’re not comfortable to go back there all the way. We like the direction that we’ve been going. We enjoy the process that we have now. We’re just gonna play and make use of all the tools in the toolbox.

Do you think your sixth album will be more similar to “Living Things”?