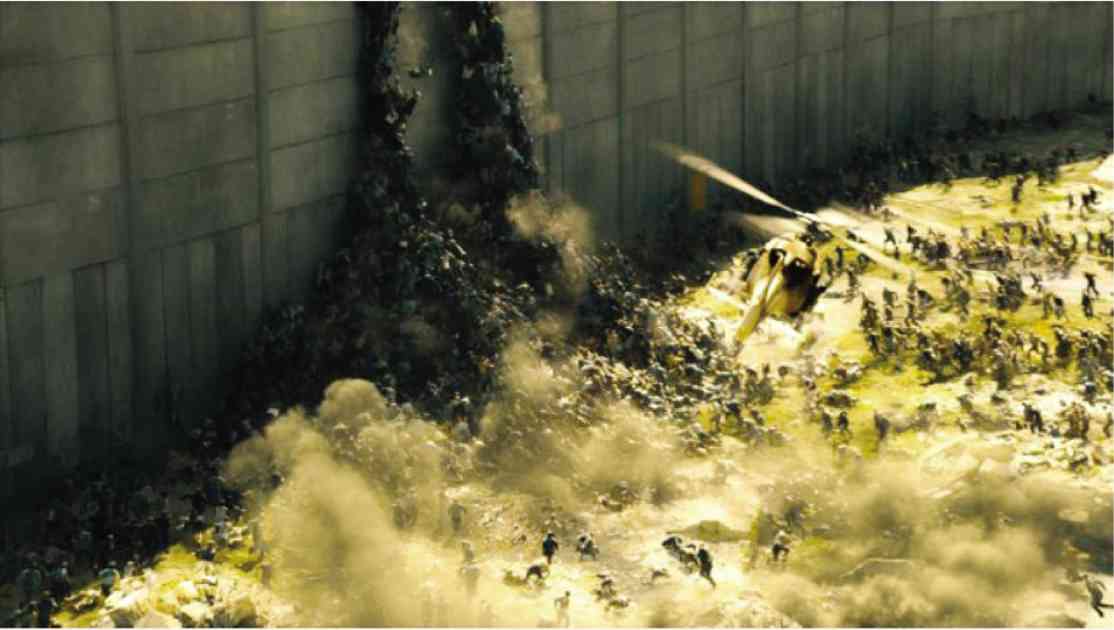 SCENES from the movie. The fictive world of the undead sheds light on global reality. 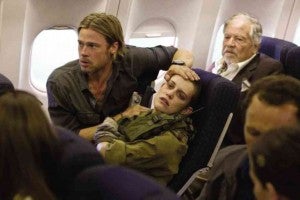 Early in “World War Z,” the latest zombie apocalypse dramatized on film, the protagonist utters what may well be its theme: Movement is life.

Gerry Lane, the United Nations investigator played by Brad Pitt, says it in Spanish: “Movimiento es vida.” Lane’s quest is to find a solution to a viral epidemic that’s been turning humans into zombies.

The movie’s own heroic goal is to turn a schlocky genre into a Hollywood spectacle fit for world consumption. It is a skillful mash-up of stories generating the recent vogue for zombies. Its plot points invite comparison with the television series, “The Walking Dead” (2010), and movies like “28 Days Later” (2002) and “Contagion” (2010).

Although “World War Z” does not hold up to the criterion of originality, what makes it worth watching is that it avoids the ponderous, dilatory contrivances of “The Walking Dead,” but also gives ruminative folks something to chew. Take the thematic coordinates that the movie advertises quite promptly in the first act: To live is to keep moving, and to move is to beget more life. (Let’s call this sound bite version of Newtonian theory of motion as “Lane’s law.”

“World War Z” drops this shard of platitude right at the crux of an episode featuring an encounter between Lane and a Latino migrant, around the first 15 minutes of the movie. It takes place in a cramped apartment in derelict Newark, a city often regarded as Manhattan’s backyard.

Lane’s law emerges in the context of reciprocity, the relations between host and guest during an emergency situation. The zombies outside are clambering up the stairs. If a person gets bitten, he or she turns into a monster after 11 seconds.

Viewers are likely to root for the Latino family because they have just done Lane a huge favor—they took the UN agent and his family under their care. With the zombification of America, the era of migration yields surprising ironies. Catastrophe has rendered host and guest interchangeable.

Apropos this indeterminacy, Lane offers the Latino family a counter-gift by trying to lead them past the monsters. That’s when Lane utters the idea linking movimiento and vida.

Two kinds of social mobility emerge in stark contrast. On the one hand, there is the advocate of, ahem, world peace. On the other, there is the migrant. In a dimly lit room, the fictive world of the undead sheds light on global reality.

To credit the movie’s earnest effort at “correctness,” it is worth noting that Lane takes pains not to sound like a constable of the world. His piece of dialogue could have been rendered in the imperative: “Move it if you want to live, hombre.” Instead, Lane kindly translates his maxim of survival into Spanish. Shoring up what Spanish vocabulary his UN career has afforded him, he addresses the Latino guy directly, in the language most intimate to that other person.

Up until the line “Movimiento es vida” is uttered, the migrant’s bilingual son has acted as a translator. Lane bypasses translation to secure not only the life of the other person, but also the survival of an idea across language barriers: the idea of humanity.

The human capacity for language is key to the film’s feel-good surplus. Pitted against zombies, cultural aliens gain the human status they do not quite have in real time.

Linguistic mobility in translation ties up quite nicely with Lane’s law. The movie is rife with these motifs of movimiento gone awry: airplanes taking off and crashing, cars and trucks coming to a halt or bursting into flames. Only language survives.

Confronted by monsters, with only their voices intact, the power-brokers of globalization and the persons subjected to their power realize they are not totally different from each other. Both need mobility in language and action.

Zombies, by contrast, do not have voices. They are unable to recognize another’s humanity. Their deeds consist solely in using mouth and limb for cannibalism. Human aliens—stateless citizens, lesbians, slum dwellers—are not zombies, after all.

For a split second, in the scene highlighting Lane’s law, the cross-cultural bromance between the hunky globetrotter and the migrant is electric. Beside the undead, the human alien—by virtue of language—is at last endowed with personhood.

But no sooner than the movie quivers with fellow-feeling, the plot reasserts the hierarchical distinctions within the human realm. This happens precisely when, in spite of its enunciation in Spanish, the Latino guy oddly seems unable to grasp Lane’s law.

The moment, needless to say, is dismal as far as fantasy goes. Between the agent of the world order and the person who has survived poverty as well as the border police, no one perhaps understands movement qua life more viscerally than the migrant.

Hollywood, however, has chosen to script the migrant’s role as that of a knucklehead. The migrant responds to “Movimiento es vida” with confusion or sheer stubbornness. Against Lane’s well-meaning advice, the migrant decides not to move.

Soon enough, the migrant and his wife turn into agile corpses with big appetites. Only their son survives, as if to suggest that a dude with long blond hair knows better than a man who does not speak English, globalization’s lingua franca.

Lane’s law is seductively universal. It can work as a mantra not just for the couch potato hesitating to go to Zumba class, but also for refugees fleeing drones or the cries of jihad, and for stateless folks gambling their economic hopes in a neighboring state.

Mobility as life also happens to be the line that, since ancient times, has linked the action-driven plot to epic deeds. In the “Iliad” (in whose film adaptation Pitt also played the hero), thought interrupts plot movement only when a character grieves.

The same holds true for action movies. Like a gas-guzzling humvee, “World War Z” keeps its narrative gears in constant motion. It blasts away the audience’s potential boredom and keeps the contemplative pauses at a minimum.

Although action-packed stories rarely make contemplation their hero, it would be interesting to press the mental pause button right here. Lane’s law bears its own irony when placed alongside the quickness of zombies. The monsters can leap into helicopters and scurry up even the high walls of Jerusalem.

Zombies force us to revise Lane’s law. Ravenous mobility is the chief trait of the undead. Agents of fierce movement do not always serve the ends of the living.

The untimely interruption of thought, hence, seems only proper. Thinking demands a step back from the pressures of the moment. It struggles to create its own space even in the face of horror, or of an action-packed zombie flick.

How resiliently do our fantasies of mobility make room for as many persons as possible, including all sorts of human aliens? How capacious is the fiction of the human family when confronted by emergencies that breed figurative monsters?

“World War Z” is a mental experiment for these kinds of questions. They are questions hinged on the choice between surrendering to zombies and courageously undoing the distinctions that, on- and off-screen, alienate human beings from each other.

Meanwhile, inhuman teeth seem sharper than ever. Through state policies as well religious dogma, they gnash and cleave without a moment’s thought, determining who counts as persons and who counts for nothing. The boundary of humanity is as fragile as skin.