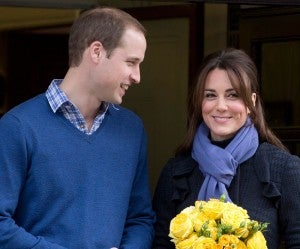 LONDON — Prince William and his wife Catherine’s royal baby, expected within days, will officially be called a prince or princess of Cambridge, Kensington Palace said Tuesday.

Prince William was created the Duke of Cambridge on his wedding day in April 2011 and his wife is the Duchess of Cambridge.

“If it’s a boy, it will be His Royal Highness Prince (name) of Cambridge,” a Kensington Palace spokeswoman told AFP.

“If it’s a girl, it will be Her Royal Highness Princess (name) of Cambridge.”

The baby should not be called the prince or princess of Cambridge — without the first name — just as, pre-marriage, William was called Prince William of Wales, rather than prince of Wales, which is his father Prince Charles’s title.

The royal couple have not yet revealed the gender or name of the baby.

The news was warmly welcomed in Cambridge, eastern England, which is known worldwide for its historic university.

“I’m sure a great many people in Cambridge will be delighted at this news and see it as a real honor for the city,” said Julian Huppert, Cambridge’s member of parliament, according to the Cambridge News newspaper.

The city’s deputy mayor George Pippas, added: “I am happily surprised by this incredible news.

It is wonderful. We could not have wished for a greater honour. Now we are all sitting on our hands waiting for our prince or princess to arrive.”

Any children William has will be princes or princesses and enjoy the style of royal highness from birth, following new letters patent issued by Queen Elizabeth at the New Year.

“The Queen has been pleased by Letters Patent under the Great Seal of the Realm dated 31 December 2012 to declare that all the children of the eldest son of The Prince of Wales should have and enjoy the style, title and attribute of Royal Highness with the titular dignity of Prince or Princess prefixed to their Christian names or with such other titles of honor,” the notice read.

On the morning of his wedding day, Queen Elizabeth conferred titles on William, as is the tradition for royal grooms.

He was created the Duke of Cambridge, the Earl of Strathearn and Baron Carrickfergus.

The dukedom of Cambridge has been used as a royal title since the 1660s, and last became extinct in 1904. A dukedom is the highest rank in British peerage.

Wives are entitled to use their husband’s titles, hence Kate is formally known as the Duchess of Cambridge.