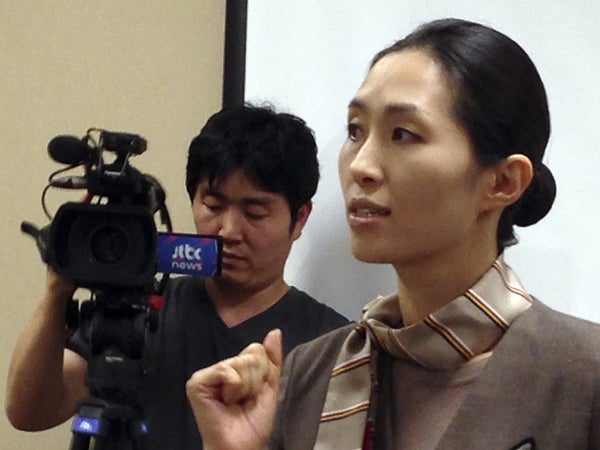 This July 7, 2013 file photo shows Asiana Airlines Flight 214 flight attendant and cabin manager, Lee Yoon Hye, speaking to the media during a news conference in San Francisco. Before Asiana Flight 214 crash-landed in San Francisco, the last time the Korean airlines' flight attendants made news was over their union's effort earlier this year to get the dress code updated so female attendants could wear trousers. AP

SAN FRANCISCO — Before Asiana Flight 214 crash-landed in San Francisco, the last time the Korean airlines’ flight attendants made news it was over an effort by their union earlier this year to get the dress code updated so female attendants could wear trousers.

Now, with half of the 12-person cabin crew having suffered injuries in the accident and the remaining attendants receiving praise for displaying heroism during the emergency evacuation, the focus has shifted from their uniform looks to their heroic actions.

In the July 6 crash three members of the crew were ejected from the plane’s sheared off tail section while still strapped in their seats. Those who were able, meanwhile, oversaw the emergency evacuation of nearly 300 passengers — using knives to slash seatbelts, slinging axes to free two colleagues trapped by malfunctioning slides, fighting flames and bringing out frightened children.

“I wasn’t really thinking, but my body started carrying out the steps needed for an evacuation,” head attendant Lee Yoon-hye, 40, said during a news conference Sunday night before federal safety investigators instructed the airlines not to let the crew discuss the accident. “I was only thinking about rescuing the next passenger.”

Such conduct has given a measure of pride to members of a profession who often are recognized only for their appearance and customer service skills.

“In the face of tremendous adversity and obstacles, they did their job and evacuated an entire wide-bodied aircraft in a very short period of time,” said Veda Shook, international president of the Association of Flight Attendants and an Alaska Airlines flight attendant.

“It’s such a shining reflection, not just of the crew, but of the importance of flight attendants in their roles as first responders,” she said.

Along with training in first aid and firefighting, flight attendants every year are required to practice the moves needed to get passengers off a plane in 90 seconds or less, Shook said. They go through timed trials, practicing skills that include shouting over pandemonium and engine noise, communicating with people frozen in fear and opening jammed doors and windows, she said. The goal is to make performing these tasks automatic.

“We have the muscle memory,” Shook said.

It’s a significant departure from the days when flight attendants were always women and known as stewardesses or air hostesses. In that era decades ago, members of the cabin crew weren’t expected to play much of a role in emergencies.

Laura Brentlinger, who spent 31 years as a United Airlines flight attendant, recalled having no idea how much danger everyone was in during one of her first emergency landings in 1972. She didn’t realize the severity of the situation until it was over and she saw the pilot’s face.

“In those days, it was like pat you on the head, just go back and keep the people nice and smile. That’s how far we’ve come, thank the Lord,” Brentlinger said. “We were just little Barbie dolls back there.”

The role of flight attendants in the U.S. expanded significantly in 1989 after Air Ontario Flight 1363 crashed after taking off in Canada. An investigation revealed that a flight attendant had seen ice on a wing but did not speak up, assuming the pilots knew and would not welcome the information from her.

Since then, FAA rules have required that cabin crew members be incorporated into the communications system known as “crew resource management” that empowers all airline personnel to voice concerns to the cockpit even if it means challenging senior pilots.

“I’m sure they have a very different hierarchy and can’t do anything without the pilot’s permission,” she said. “There is no doubt in my mind I would have evacuated that aircraft immediately.”

Brentlinger said her heart aches when she thinks about what Asiana’s flight attendants are going through now and are likely to go through in the months to come.

After the disaster aboard United Flight 811, Brentlinger said she suffered severe post-traumatic stress disorder and was unable to get back on a plane for more than four years. Handling the emergency itself was “the easiest part of the whole process … because you train for it and you just do it,” she said.

She went on to say that “after the dust settles, so to speak” and one tries to get on with life, “it’s horrific, at least it was for me.”

The Flight 214 cabin crew consisted of 11 women and one man, ranging in age from 21 to 42, according to the airline. Spokeswoman Lee Hyomin said Asiana is not sharing information on emergency training hours of its flight attendants because the National Transportation Safety Board asked it not to share any information related to the accident while it’s being investigated.

Jean Carmela Lim, 32, a Sydney-based travel consultant, spent a year working as an Asiana flight attendant eight years ago and posted pictures from her experience on her travel blog, Holy Smithereens, this week. She recalls her weeks-long safety training as rigorous.

“We needed to be able to swim while dragging another human — dead weight — in one hand, and hoist ourselves and the dead weight onto the safety raft,” Lim said.

The appearance standards were almost as demanding. Lim, who was 23 when she applied for the job, initially was told she was too old. During the interview, she was required to wear a short skirt without stockings. Flight attendant school included sessions on hair, makeup and comportment. During flights, the cabin manager inspected the attendants to make sure they were wearing the right color of nail polish and had their aprons properly ironed.

Lim said that appearance is important, but seeing pictures of Flight 214’s attendants outside the burned-out aircraft in skirts made her hope their union prevails on the pants issue.

“If there’s evidence that wearing a skirt will enable you to save more lives than wearing pants, then by all means keep them in skirts,” she said. “If I’m trapped in a burning aircraft , I doubt I’ll notice if the cabin crew saving me had lipstick on her teeth or had a tuft of hair out of place.”