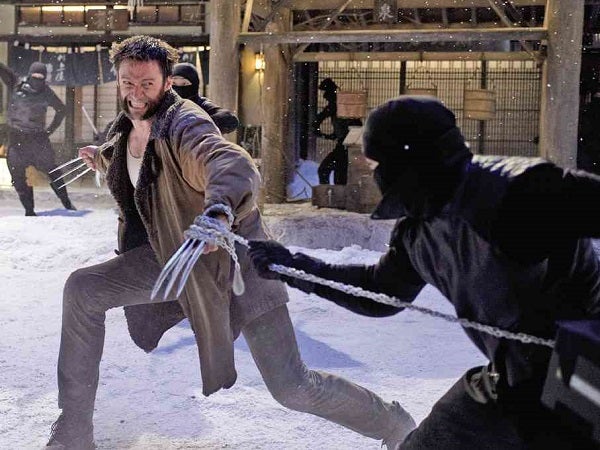 HUGH Jackman in “The Wolverine.”

At this point in his uncanny evolution as an artist, Hugh Jackman is known as an astonishingly versatile actor, who sang his way to an Oscar nomination as noble Jean Valjean in 2012’s “Les Misérables,” controlled robots as Charlie Kenton in 2011’s “Real Steel,” and performed sleight-of-hand as Robert Angier in 2006’s “The Prestige.”

Yet he was a virtual unknown when he replaced another actor in the role of Logan, also known as Wolverine, in Bryan Singer’s game-changing 2000 film “X-Men.” The film paved the way for comic book movies to become part of mainstream cinema.

Playing Wolverine changed everything for Jackman as well. He has become a movie celebrity and is mostly associated with the ferocious Canadian with the Adamantium claws and the wicked healing factor, one of Marvel Comics’ popular characters.

Aside from headlining the three original “X-Men” movies, Jackman’s Wolverine starred in a solo film—the well-intentioned if somewhat overloaded “X-Men Origins: Wolverine” in 2009. That movie dealt with Logan’s past, as does his second solo outing, “The Wolverine.”

Interestingly, “The Wolverine” is not really a sequel to “X-Men Origins: Wolverine,” but instead is a direct sequel to 2006’s “X-Men: The Last Stand.” After the tragic events in that film, Logan is now a recluse in the wilderness, haunted by the ghost of his beloved Jean Grey (Famke Jannsen), when an enigmatic woman named Yukio (quirky Rila Fukushima) invites him to travel to Tokyo.

During World War II, Logan was a prisoner of war in a camp near Nagasaki when the city is devastated by the American atomic bomb. Using his powers, Logan saved a kind prison guard named Yashida, who is now one of Japan’s most powerful businessmen. But Yashida is dying and his last wish is to see Logan again.

Upon arriving in Japan, Logan learns that Yashida seeks to prolong his life and grant Logan’s deepest desire by stealing Logan’s healing factor, enabling Logan to die. “I can make you mortal,” Yashida says.

Logan refuses, but when Yashida’s empire is passed on to his beautiful daughter Mariko (newcomer Tao Okamoto), Logan goes on the run to defend her and discovers he has been de-powered. The truth behind that mystery leads to deadly, surprising places.

Based on the comic books by Chris Claremont and Frank Miller, “The Wolverine” is directed by James Mangold, (“Walk the Line,” “3:10 to Yuma”) who approaches “The Wolverine” as a deep character study of Logan—what drives him and what wounds him.

The man and the warrior

Mangold explores the idea of Logan seeing himself as a ronin (a samurai without a master). This film shakes itself free from most of its “X-Men” connections, and focuses on Logan the man and Wolverine the warrior.

Though “The Wolverine” is full of dramatic scenes, it is also loaded with ninja-heavy action sequences, including an audacious battle on top of a speeding bullet train. Yukio proves quite adept with a blade, and Logan finds himself in hand-to-hand combat almost all through the film.

It’s more of a martial arts movie with sci-fi elements than your usual comic book adaptation. The Japanese setting allows cinematographer Ross Emery and production designer François Audouy to give “The Wolverine” a very stylish feel that is also true to the original comic book material.

Those unfamiliar with the last “X-Men” films should bone up on the events in those movies to be current with the premise of “The Wolverine.” Additionally, stick around for the credits so you don’t miss anything (hint, hint).

Jackman gets to employ his acting chops more than in his previous appearances as Logan, while also giving the part a hefty physicality.

Providing the requisite villainy is the seductive but scary Viper, a classic Marvel baddie, played with relish by Russian actress Svetlana Khodchenkova.

This is the sixth time Jackman plays Logan and it is clear no one else can be “The Wolverine.” He will reprise the part in next year’s highly anticipated “X-Men: Days of Future Past,” a time-travel epic also based on a fan-favorite story arc that basically unites all of the previous “X-Men” actors.

But if you really want to know what makes him tick—his “X-factor,” so to speak—you need to witness “The Wolverine,” the art of war according to Logan, and a film that redefines figuratively and literally what he is.

20th Century Fox’s “The Wolverine” opens in cinemas on July 25.