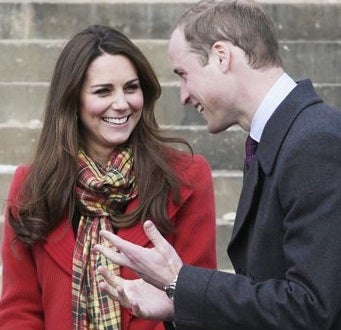 LONDON—The birth of Prince William and his wife Catherine’s first baby will be the culmination of their relationship which began as friendship, blossomed into love and saw them marry in a fairytale wedding.

The royal couple never hid their desire to start a family of their own, a new phase that will require them to juggle their high-profile public lives with nappy changing, sleepless nights and the other demands of parenthood.

They will also have to handle the global interest in their newborn baby, which will be third in line to inherit the throne after its grandfather Prince Charles and then William.

Despite their glittering wedding on April 29, 2011 at London’s Westminster Abbey, the couple have always been determined to keep their private life low-key.

They mainly live in a small cottage in remote northwest Wales, close to the Royal Air Force (RAF) base where William works as a search and rescue helicopter pilot.

It is in keeping with how their relationship began, out of the public glare in a small Scottish seaside town.

Catherine has admitted that at her first meeting with the second-in-line to the throne in September 2001, when they both arrived to study at the University of St Andrews, she “went bright red” and quickly excused herself.

William, however, said in their only joint interview—in November 2010 to mark their engagement—that he always knew “there was something very special about her”.

“We went through a few stumbling blocks as every relationship does, but we picked ourselves up and carried on,” he said, adding: “It’s just really easy being with each other; it’s really fun.”

He ribbed her about reports that she had a poster of him on her bedroom wall as a teenager. “He wishes!”, she replied with a smile.

Catherine made her mark early on when William was unhappy with his course—like hers, history of art—and almost quit university. She persuaded him to stay on but to switch to geography.

William, in turn, is very protective of her. He waited to propose to give her a chance to “back out if she needed, before it all got too much”.

In June 2003, William told reporters he did not have a “steady girlfriend”, while Catherine was dating someone else.

By Christmas 2003, however, they were reported to be a couple and when they were photographed on a skiing holiday in March 2004, the palace did not deny they were together.

The course of true love never runs smoothly, though, and in April 2007 palace officials confirmed they had broken up, a fact blamed variously on William’s career and his being pictured out partying with various women.

Kate admitted she “wasn’t very happy” about the split but insisted: “It made me a stronger person.”

Within months they reunited.

After the couple effectively moved in with each other when William began work at the RAF Valley airbase in Wales, he finally popped the question on a holiday in Kenya in October 2010, giving her his mother Diana’s engagement ring.

Their wedding was a mix of glittering pageantry and spontaneity.

A million people lined the streets and two billion television viewers worldwide watched as Catherine swept up the aisle.

Now the Duke and Duchess of Cambridge, they undertook their first royal tour in June and July 2011, visiting Canada and California on a trip that saw them carve out their own style, mixing ceremonial duties with light-hearted events.

They also got through a six-week separation when William deployed to the Falkland Islands in February 2012, though Catherine bought Lupo, a black Cocker Spaniel, to keep her company.

In September last year, they travelled to Singapore, Malaysia, Tuvalu and the Solomon Islands on behalf of his grandmother Queen Elizabeth II as part of the year-long diamond jubilee celebrations marking her 60 years on the throne.

During the tour, the couple had to contend with the publication of paparazzi shots of the duchess sunbathing topless in France.

Catherine’s pregnancy was announced early on December 3 last year as she was admitted to hospital with acute morning sickness. William spent hours at her bedside.

She left hospital after three nights and carried out a series of official duties during her pregnancy, showing off her baby bump. Her last public appearance was at Trooping the Colour, Queen Elizabeth’s official birthday pageant, on June 15.

The couple and their newborn baby are to move into Kensington Palace in London, William’s childhood home, once renovations are complete later this year.

The move symbolises their growing stature in the royal family—and the future that awaits their babe in arms.