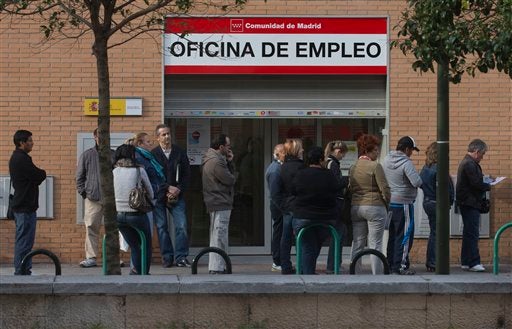 People queue outside an unemployment registry office in Madrid, Spain, in this file photo dated Monday May 6, 2013. Greece and Spain have the highest unemployment rates in the eurozone, with both countries also mired in a youth unemployment crisis, according to figures released by Eurostat, the EU's statistics office, Monday July 1, 2013, which reveals that unemployment across the 17 European Union countries that use the euro hit another all-time high in May 2013. AP

MADRID — Spain’s bitter financial crisis is eating away at the country’s high-end restaurant scene, with the owners of another top establishment saying it will have to close at the end of August.

A statement published on the website of the famed eatery outside Barcelona is blunt: “Can Fabes says goodbye.”

Can Fabes’ closure is the latest in a small but growing list that has seen the disappearance of celebrated eateries such as El Bulli, which was rated the world’s best restaurant five times by the magazine The Restaurant until it served its last supper in July 2011 amid reports that it was too costly to run.

Spaniards take great pride in their cuisine — the careful preparation of food is almost a national obsession — and top chefs are celebrities among all classes. But Spain’s economy has been in dire straits since the construction industry collapsed in 2008. Unemployment is at 27. 2 percent and people are increasingly unwilling to spend hard-earned cash on luxuries such as fine dining.

High-end restaurants are expensive to eat at, but they are also expensive to run, often with staff numbers equal to customers sitting at tables.

Since 2011, at least six famed Spanish restaurants have shocked the public by either closing or announcing they were on the verge of doing so. That includes three establishments among the roughly two dozen in Spain that have obtained the highly coveted two or three-star status from the renowned Michelin restaurant guide.

To Alberto Luchini, who edits one of Spain’s best-known restaurant guides, that’s an “ultrasonic speed” of loss for the country’s high-end restaurants, and he expects the financial crisis to consume even more in the coming months. “By the time this crisis ends, the top-end concept will have changed, too,” he said.

Can Fabes was dealt a massive blow when its founder and renowned chef, Santi Santamaria, died of a heart attack in February 2011 while at the helm of the kitchen at a restaurant he had just opened in Singapore.

Santamaria’s death and Spain’s economic problems combined appear to have proved too large a hurdle to overcome for the business model so painstakingly devised by the chef and his wife and partner, Angels Serra.

Founded in 1981 as an informal bistro by the self-taught Santamaria in his family’s ancestral village of Sant Celoni, 53 kilometers (33 miles) northeast of Barcelona, Can Fabes earned its first Michelin star seven years later.

The chef’s uncompromising insistence on using only the highest quality ingredients and his deep respect for Catalan regional produce soon led to greater recognition which saw him earn and maintain an almost unattainable Michelin three-star status from 1994 to 2011, continuously.

Santamaria’s death heralded the first problem, with the loss of one star. At that stage, his empire had burgeoned to include restaurants in Barcelona, Madrid and Toledo in Spain, as well as in Dubai and Singapore, apart from the original one.

The chef’s family — his wife, son Pau and daughter Regina — tried to keep Santamaria’s heritage alive, employing chef Xavier Pellicer and then Frenchman Jerome Bondaz. But one by one they lost restaurants, and on Aug. 31 the original bistro must close, they say.

“The crisis has affected us badly,” Santamaria’s daughter told The Associated Press on Saturday. “While we still retain a tiny hope that a financial backer will step forward to invest in this dream, we have to accept that cuisine at this level carries huge running costs.”

Luchini, the Metropoli restaurant guide editor, said, “I’m sure El Bulli lost money, and most of Madrid’s top-end restaurants are suffering badly and surviving only because they succeed in attracting around 90 percent foreign customers.

“I went to Santamaria’s restaurant recently and just two tables were occupied.”

Three-star restaurants make very little money on their own, said restaurant critic Victor de la Serna, who for decades has written under the pseudonym of Fernando Point. “They need secondary activities — cheaper branches, advertising contracts, catering, publishing — to make a profit,” he said. “These are drastically cut during a steep recession, and there goes the famous restaurant.”

De la Serna said it was “miraculous” that the list of top restaurants that had gone under after a six-year recession in Spain was so short, “for now.”

“The avant-garde movement was driven by easy money due to cheap credit. Without it I doubt El Bulli or any of these top restaurants would have made it,” said Gerry Dawes, a New York-based critic who publishes the website “An Insider’s Guide to Spanish Food, Wine, Culture and Travel.”

Dawes predicted that few top restaurants are likely to survive Spain’s financial crisis. “People went there for the prestige of saying they’d been, as much as for the cuisine,” he said.

Chef Sergi Arola illustrated how badly the recession has hit the luxury restaurant trade when he announced last month that his two-star Madrid restaurant, Gastro, would have to close because of a tax debt of 150,000 euros ($197,000). Other recent closures that have shocked Spain include highly-rated eateries such as Jockey, Balzac and Club 31.

Many of Spain’s top chefs expressed dismay over the news of the latest epicurean casualty.

“Can Fabes made history in the world of gastronomy,” said Joan Roca, chef of El Celler de Can Roca, the restaurant that Restaurant magazine now rates the world’s best. “Its closure demonstrates just how unfair this crisis is.”