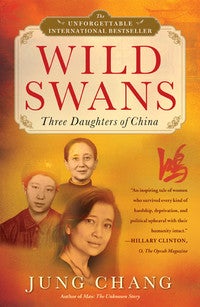 HONG KONG—It may be unclear what exactly Beijing means by its aspirational “China Dream” slogan, but for banned “Wild Swans” author Jung Chang it’s a positive step. “It’s good to have a dream,” she says. “My dream is to have my books published in China.”

The Sichuan-born writer now lives in London and is best known for her family autobiography “Wild Swans”, which has sold more than 10 million copies worldwide.

But none of those sales were in China. “Wild Swans” is banned there along with Chang’s explosive 2005 biography of Mao Zedong, the founder of the People’s Republic of China who instigated the Cultural Revolution in 1966 and whose rule is estimated to have caused tens of millions of deaths through starvation, forced labour and executions.

Chang, 61, spoke to AFP on the sidelines of the annual Hong Kong Book Fair, which closes on Tuesday, where she took part in a seminar on writing.

The event draws thousands each year including mainland Chinese visitors, who take the opportunity to travel just a few miles south of the border where they can buy books banned at home.

“Books were burned across China,” said Chang during the forum, recalling the chaotic ten-year Cultural Revolution that saw citizens turn on their neighbours. It is thought to have caused half a million deaths in 1967 alone, according to US-based British historian Roderick MacFarquhar.

“When I wrote my first poem in 1968 on my sixteenth birthday I was lying in bed and heard the door banging. Some Red Guards had come to raid our flat and I had to quickly run to the bathroom, tear up my poem and flush it down the toilet.”

The odds were heavily stacked against Chang realising her dream of becoming a writer.

“Growing up in China in the 1950s, 1960s and early 1970s, it was impossible… Nearly all writers were persecuted—driven to suicide, sent to the gulag, some were executed.”

She spent several years as a peasant, a “barefoot doctor”—treating those in rural areas despite only basic medical training—and later in a factory as a steel worker and electrician.

“I was always thinking about writing,” she said. “My mind was always writing with an invisible pen. But I couldn’t put that pen on paper.”

Her 2005 biography “Mao: The Unknown Story”, which she co-authored with her husband Jon Halliday, was the fruit of 12 years trawling through archives and interviews.

It sought to lift the lid on the man behind the Cultural Revolution, a period that the ruling Communist Party keeps out of mainstream Chinese media over concerns that open debate could be used to justify unrest.

Mao Zedong set the period of lawlessness in motion to bolster his authority, previously undermined by the disastrous effort to modernise China known as the “Great Leap Forward,” which led to a famine that historian Frank Dikotter estimates killed 45 million in the late 1950s and early 1960s.

Chang’s book won both praise for challenging perceptions of Mao as well as criticism that it lacked balance. Chang, who lost her father and grandfather to the Cultural Revolution, does not hide her feelings.

“He is right there with Hitler and Stalin,” she said of Mao.

“I feel extremely sad about it. Perhaps somebody is trying to claim legitimacy for the rule of the communist party from Mao. I think that’s a very bad idea because that legitimacy would be based on ignorance,” she said.

“The majority of people in China know that Mao was a tyrant, his rule was a tyranny and to cite Mao is not going to appeal to the majority of Chinese people. I think whoever gives the leaders this idea is making a huge mistake.”

The rise of Bo Xilai, former party boss of the southwestern megacity of Chongqing, and his revival of “Red culture”, with Maoist quotes sent to citizens’ mobile phones and massive “Red song” concerts, also highlighted the appeal the former leader retains in some quarters.

Bo’s spectacular downfall last year—he is set to face trial for corruption and other crimes and his wife has been convicted of murdering a British businessman-led Chang to hope initially it might have been a backlash within the party against Maoist revivalism.

“At the time of Bo’s fall I thought there might be somebody in the party who thought he was going too far in promoting Mao,” said Chang.

“I think now that that’s not the case. He fell simply because his number two fled to the American embassy and spilled the beans.”

Life changed for Chang after Mao’s death in 1976. Winning a scholarship, she became the first person from mainland China to get a doctorate from a British University in 1982, coming away from York with a Ph.D. in linguistics.

But she says her dream of becoming a writer was made possible by a visit from her mother in 1988.

“For the first time she told me the stories of her life, of my grandmother and my father.

“She came to stay with me for six months and she talked every day,” said Chang.

“She left me 60 hours of tape recordings. With that I wrote “Wild Swans”. And that’s how I became a writer.

“My mother knew that I had this unspoken dream, and she was making it possible for me to fulfil my dream.”