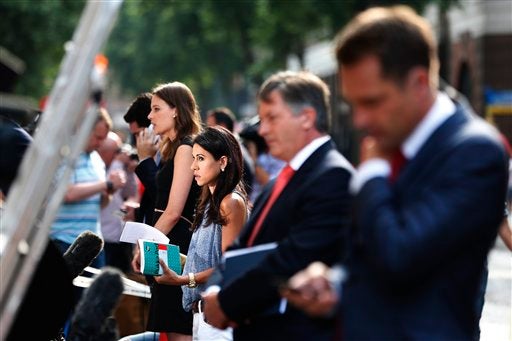 LONDON— The wait is almost over.

News that Prince William’s wife Kate is in labor invigorated the makeshift encampment outside St. Mary’s Hospital — a melange of journalists, photographers, curious onlookers and a few die-hard royalists.

Reporters filed updates in a dozen languages outside the Lindo Wing, although no news has emerged since Kate was admitted early Monday. Tourists photographed the plain, 5-story brick building, its front door flanked by four police officers, and snapped the scurrying, coffee-swilling photographers and journalists.

Terry Hutt, a 78-year-old carpenter from Cambridge in eastern England, sensed an end to the vigil he has kept for 12 days, sleeping outside the hospital on a bench covered with a Union Jack blanket.

Hutt, who is proud to have met every royal from the late Queen Mother on, said he was doing his bit for Britain by camping outside the hospital in his red, white and blue Union Jack suit, holding flags and congratulatory banners.

“To me, the royal family play a very, very important role,” he said. “Visitors from all over the world haven’t got a king and queen. It’s a plus for us.”

As London commuters rushed past the hospital to work, Pascal Faure, a maintenance contractor originally from South Africa, stopped to snap a picture on his phone for friends at home and in Australia.

“It’s part of their heritage, I guess, their culture,” said Faure, who claimed his own tenuous royal connection: “Apparently my third cousin once removed is Chelsy” Davy, Prince Harry’s former girlfriend.

He also had more insight than most into the 5,000-pound ($8,000) -a-night private wing where the Duchess of Cambridge is giving birth. He fixed the air-conditioning there last week — a good thing, too, as Monday is scheduled to be the hottest day of the year in London.

“If the air-con stops working, I’ll probably be the one to go in,” he said,

Some bystanders were bemused by the scale of the media throng, but many were happy to enjoy the sense of occasion.

“It’s probably quite good for the whole country and likewise for the rest of the world,” said Matt Hicks, an event manager from Australia’s Gold Coast.

“I love the royals — what it’s all about, the history behind it,” he said. “I know this country is quite divided about it, but back in Australia we love the royals.”

Whether a boy or a girl, the baby will be third in line to the British throne. Most bystanders expressed no preference about the baby’s gender.

“A girl maybe, if it’s as beautiful as Kate,” said Katya Im-Albon, a tourist from Switzerland.