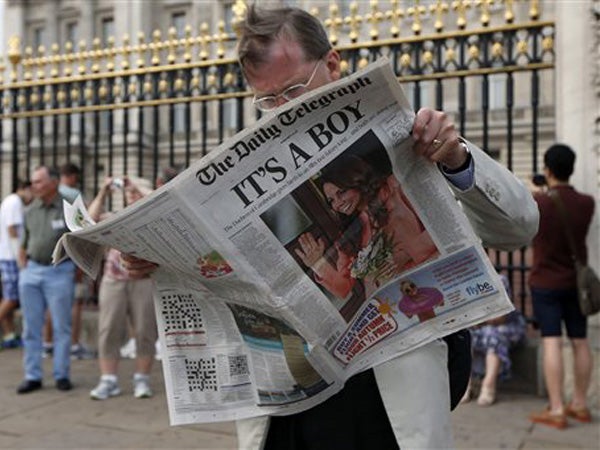 A man reads a newspaper carrying front page news of the birth of a baby boy of Prince William and Kate, Duchess of Cambridge, outside Buckingham Palace in London, Tuesday, July 23, 2013. AP

LONDON— It’s Day One of parenting for Prince William and Kate. After the excitement and fatigue and joy of childbirth — emotions shared with a nation — the young couple is expected to bring the prince home Tuesday.

It is a daunting moment for any young couple, even one with as much support as the Duke and Duchess of Cambridge

The infant’s name — and what he looks like — remain a royal mystery. And as he begins a long journey expected to see him someday become a king, Britons, and supporters from around the world, have been joining the royal family in celebration.

Kensington Palace announced that the Duchess of Cambridge had given birth to the 8 pound, 6 ounce (3.8 kilogram) baby boy at 4:24 p.m. Monday, triggering an impromptu party outside Buckingham Palace and in front of the hospital where Kate gave birth.

More celebrations are expected Tuesday, including gun salutes by royal artillery companies to honor the birth and the ringing of bells at London’s Westminster Abbey.

Kate, William and their son spent the night at the private Lindo Wing of St. Mary’s Hospital. Officials have not said when the family will leave.

Tourists and well-wishers lined up outside Buckingham Palace gates Tuesday to take pictures of the golden easel on which, in keeping with royal tradition, the birth announcement was displayed.

”This was a great event — yet again our royal family is bringing everyone together,” said 27-year-old David Wills, who took a two-mile detour on his run to work to pass the palace. “I kind of feel as though I am seeing part of history here today.”

Halfway around the world, royalist group Monarchy New Zealand said it had organized a national light show, with 40 buildings across the islands lit up in blue to commemorate the royal birth, including Sky Tower in Auckland, the airport in Christchurch, and Larnach Castle in the South Island city of Dunedin. A similar lighting ceremony took place in Canada; Peace Tower and Parliament buildings in the capital, Ottawa, were bathed in blue light, as was CN Tower in Toronto.

The baby isn’t even a day old — and may not be named for days or even weeks — but he already has a building dedicated to him.

Australian Prime Minister Kevin Rudd said an enclosure at Sydney’s Taronga Park Zoo would be named after the prince as part of a gift from Australia. The government would donate 10,000 Australian dollars ($9,300) on the young prince’s behalf toward a research project at the zoo to save the endangered bilby, a rabbit-like marsupial whose numbers are dwindling in the wild. The prince’s name — when known — will be added to the bilby enclosure.

“I don’t know if the royal family would need this, but we’ll probably give them a free pass to Taronga Park Zoo as well,” Rudd said.

British media joined in the celebration.

“It’s a Boy!” was splashed across many U.K. front pages, while Britain’s top-selling The Sun newspaper temporarily changed its name to “The Son” in honor of the tiny monarch-in-waiting.

“Regal has Landed,” the paper cried.

The Mirror, in an allusion to the fact that news of the baby’s birth first broke online, spoke of: “The Twitter of Tiny Feet.”

So far, it’s the palace which has largely set the pace of the wall-to-wall media coverage, using social media to keep followers abreast of the news.

New additions to the royal family typically set off a tug-of-war between the royal household and the press. The feverish media excitement ahead of Kate’s engagement to William led to a warning from Britain’s press watchdog, and the hunger for news about the third-in-line to the British throne is likely to be similarly intense.

William, whose mother Diana died in a Paris car crash in 1997 while being hounded by paparazzi, was likely to insist on a measure of privacy, former royal press secretary Charles Anson told the BBC.

“I think Prince William and the duchess will be very keen to protect their young child from too much attention,” he said.

On the other hand, he said that “people want more news about this royal baby.”

He said the palace would have to find some way to handle that, predicting “a bit of negotiation, a bit of arrangement with the media to get it right.”