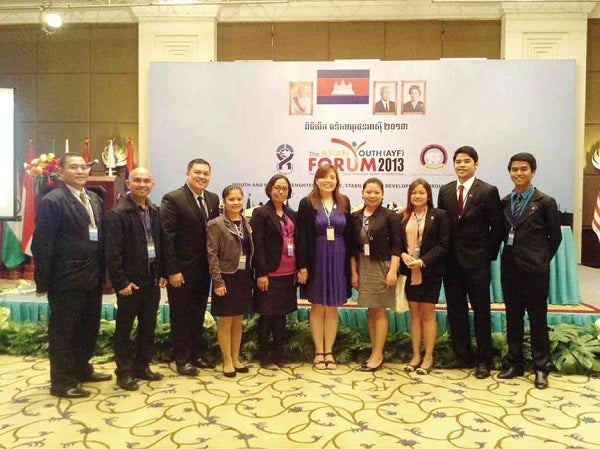 Under the blistering heat of the sun, the Mekong River stood as a mute witness while the Khmer Rogue took over Phnom Penh and brought almost two million of its inhabitants to the hinterlands for a life of hard and bloody agricultural labor between 1975 to 1979.

In those years, the fields of Cambodia became the burial ground of intellectuals and nonbelievers of the ruling regime. It was known infamously as the Killing Fields.

Roughly 30 years since Pol Pot and the Khmer Rogue were ousted from power, Cambodia has gone a long way from its notorious history. Traffic jams on the Russian Highway, bustling public markets and ongoing construction of new buildings in downtown Phnom Penh are testaments to progress in Cambodia.

In spite of the obvious positive changes in Cambodia, particularly in its capital city, remnants of a not-so-distant but extremely horrendous past continue to haunt the survivors of Pol Pot’s murderous regime. They continue to fear that the peace they struggled to sustain will be shattered by a culture of impunity which grew out of that regime. This fear is widely shared by numerous Asian countries.

Bou Meng, a survivor from Khmer Rouge S-21 prison, wakes up in the middle of the night in cold sweat, vividly seeing in his dreams the beatings he suffered, or his unconscious fellow prisoners hanging by their fingers, before he fell into unconsciousness. It is a common site to see armless or legless survivors of landmine blasts.

On May 31 to June 2, youth leaders from Southeast Asian countries such as the Philippines, Malaysia and Singapore, as well as other Asian countries like China, Yemen and Mongolia, met in Phnom Penh for the Asian Youth Forum.

A total of 22 countries attended the forum. Each country discussed experiences of conflict and the greater role of the youth in promoting peace.

Delegates from the Philippines, Vida Tirol-de Juan and Stephanie Zamora, shared their experiences of conflict in their hometowns. “Bohol is barely recognizable now, from 20 years before,” said De Juan. “In the past, communist rebels occupied its outskirts. However, since 2000, through cooperative efforts of the locals and the local government, the insurgency was pacified. The hills of Bohol stand witness to peace efforts and development of the province.”

Zamora, who is from Pampanga, inspired her fellow youth when she claimed that “peace can still be found in conflict zones.” She narrated the story of her friend who did volunteer work in Sultan Kudarat. She said that in the town of Kalamansig, people practice pintakasi or bayanihan (community cooperation).

The ongoing conflict has brought people of the community closer to each other. Put simply, the community became one big family, willing to provide care and protection for each other. She concluded that peace need not be costly, if only people will realize the value of life. Each war they wage and each life lost is a wasted future.

Prime Minister Hun Sen said they rebuilt Cambodia from scratch after Pol Pot’s regime. For the past 30 years, they worked very hard to rise again. Now they are experiencing peace, but they cannot be complacent. They are relying on the youth to continue the job and they need to invest in the youth in order to ensure economic progress.

Indeed, peace efforts should be community-based and reflective of the values and sentiments important to Filipinos. It should be a just, equitable, humane, principled and peaceful resolution of armed conflicts.

Singapore extended the discussion on peace by suggesting integration of peace education in the curriculum. Stacie Henson from Singapore believes that education continues to be a vital tool in teaching the youth to abhor violence.

As the conference ended, the participants decided to set aside their countries’ ideological, economic and cultural differences. Also, they agreed on a unanimous declaration on the vital role of the youth in promoting peace.

They agreed that peaceful negotiation has to be seen as something more than just ending a war. It has to be comprehensive and holistic development of society. Though it is not obvious where to begin the process of conflict resolution, it is always more important to open communication lines with parties involved.

Strolling around the streets of Phnom Penh reminded us of Manila. Though armed conflicts in the city have long been gone, the cost of war continues to be evident.