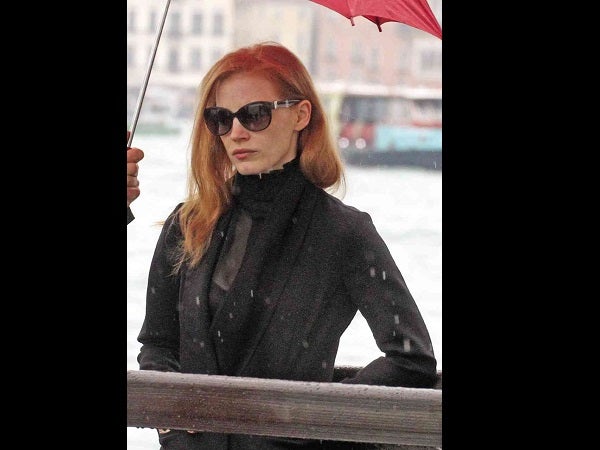 Emma Stone was eye-catching in Times Square in a pair of turquoise satin pumps from Ferragamo’s Red Carpet collection. Emma Watson was spotted at two film premieres recently wearing Ferragamo accessories. She opted for a pair of black satin pumps for the LA premiere of “This Is the End” and a black and silver metal double-facet clutch for the NYC premiere of “The Bling Ring.”

For actress Zoe Saldana, a pair of Ferragamo taupe leather sandals was perfect for the “Star Trek Into the Darkness” photo call held in Mexico City. On the same night, she also chose a Ferragamo mirror minaudière to the red carpet premiere of the film.

Katie Holmes and Jessica Chastain were both photographed in Salvatore Ferragamo sunglasses recently. Katie wore a tortoise pair while Jessica was seen twice in Ferragamo sunnies. First was at the Biennale D’Arte in Venice and second was at the opening of the Maui Film Festival.

Angelina Jolie wore a black silk cocktail dress with chiffon inserts and draped neck while celebrating her birthday with her family at a restaurant in Berlin. Madonna was photographed carrying the Verve handbag in black and white leather with python and silver metal details from the label’s Pre-Fall 2013 collection while she was in Las Vegas for the Billboard Music Awards.

Rounding off this list of stars who shined brighter were the men of Hollywood in Ferragamo apparel. At the Nice airport, actor Jason Statham was photographed in a Ferragamo tan leather jacket with white piping detail, while actor Gerard Butler turned heads in a black Salvatore Ferragamo tuxedo at the White House Correspondents’ Association Dinner in Washington DC.

Bradley Cooper chose to wear a blue three-piece tailored suit, with a two-button jacket and peak lapel, to the London premiere of “The Hangover Part 3” while Will Smith wore a beige and gray micro jacquard suit from the Ferragamo Spring Summer 2013 collection, to the Miami premiere of “After Earth.”