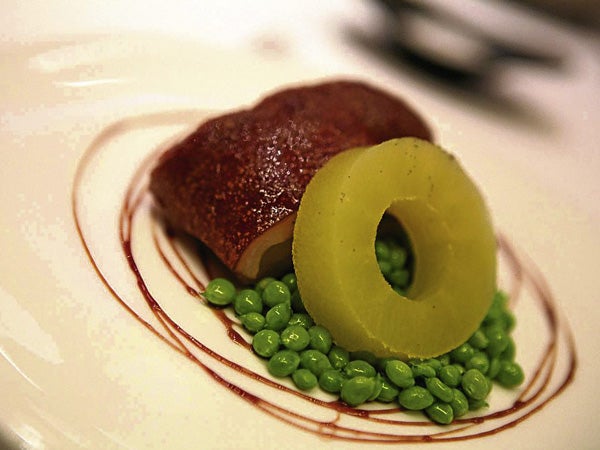 The pundits have spoken: Molecular gastronomy is waning, its death knell sounded by the doors closing on Ferran Adria’s landmark restaurant El Bulli in Spain. If that’s true then I’ll miss it, if only because it was even easier to poke fun at than nouvelle cuisine.

Molecular gastronomy took artsy fartsy eating to a new level; it’s the ultimate flashbang postmodernist dining experience, with lots of dry ice for drama, things that go pop in your mouth, jellies, spheres, and all the while, a vaguely annoying sense of eating a great deal and spending a lot of money but getting hungrier rather than full.

All the usual suspects are in evidence at Bo Innovation, a small restaurant tucked away on the second floor of a busy side street in Wan Chai in Hong Kong. Alvin Yeung is not the first

chef to try and go molecular with Chinese cuisine, but he is arguably the most successful.

The dining room was full on a weekday night, but one doesn’t have to spend three hours on the phone trying to make a reservation, as with the Fat Duck, or pay a non-refundable deposit. There’s no dress code, and the dining room strikes just the right balance between being shimmery enough to impress a dinner date and casual enough  to not be suffocating.

But this is most definitely not the place to go for the kind of hearty, chopstick-clattering Cantonese meal that we tend to think of as typical of Hong Kong. The service is essentially Western, with aperitifs on the terrace followed by offers of still and sparkling water, and a fairly interesting wine list.

There are three set menus available: the Tasting Menu, at HK$850; the Chef’s Menu, at HK$1250; and the Chef’s Table Menu, at HK$1680. Within each menu you get to choose your main course, some of which use rare ingredients like truffles or wagyu beef, and require a supplement, so with wine and coffee the bill can quickly get out of hand. I myself went on the cheap and stayed with the Tasting Menu and ordered table water, so I can’t vouch for this as a place to splash out.

Was it worth HK$850, though? Almost regretfully, I have to say that it was. I badly wanted to dislike a place that bills its food as “X-Treme Chinese Cuisine” (yes, spelled like that) and its chef as a “Demon Chef” and make fun of its molecular pretensions; but there is some solid, thoughtful artistry going on behind the conception of its dishes, and flair and craftsmanship in the execution.

Given the surroundings it seems like a place where tourists can get fleeced; but no, that’s Tsim Sha Tsui. The ideal sort of person who’d get the joke, so to speak, at Bo Innovation (because molecular gastronomy is one big inside joke, after all) is someone who understands the vernacular of fine Western-style dining but grew up with and loves modern Chinese food: rather like the chef, who grew up in HK, trained in London, then returned to open in Wan Chai.

Who else but a Chinese food lover, after all, would get the pun that is a xiao long bao that is not made with dough but is a perfect sphere of liquid that bursts in the mouth like an egg yolk? Or foie gras that is charred in the manner of Cantonese roast meats and accompanied by sweet-salty ice cream flavored with pickled vegetables? Tomatoes stewed with aged Chinese vinegar? Or a pineapple dessert that riffs on your average hopia, filled instead with homemade pineapple iced custard and a cup of warm pineapple milk on the side?

But part of what makes a good chef is knowing when to stop fooling around and give people something substantial to eat, and the main courses were suitably restrained: just very well-executed slabs of roast suckling pig or langoustines or pigeon, as good as you’d find in any high-end Chinese restaurant.

After you eat in a place like this the natural question tends to be: Could we do something similar with Filipino food, or would it just be silly if we armed ourselves with xanthan gum and liquid nitrogen and started serving dinuguan with foam or little cubes of jellied sinigang on a bed of dry ice? I myself think that innovation in Filipino cuisine must come at its own pace, and modern Chinese cuisine, especially Cantonese cuisine, has had many years’ head start in terms of refinement and invention. But it isn’t as if Filipino inventive cuisine has been standing still, either; it’s in hale health and has never been more innovative as it is today. It doesn’t have to jump on the bandwagon of molecular gastronomy, but will find its own novelty of expression in due course.

But the fact that Bo Innovation pulls it off so well is proof that the West, especially the tight-knit fraternity of chefs like Heston Blumental, Thomas Keller and Grant Achatz, et al., doesn’t have the monopoly on doing clever and strange things with food and reminding us that gastronomy is as much an art form as any other. And it’s also yummy, and worth a detour the next time you’re in HK. Forget the roast goose, and try something very, very different.