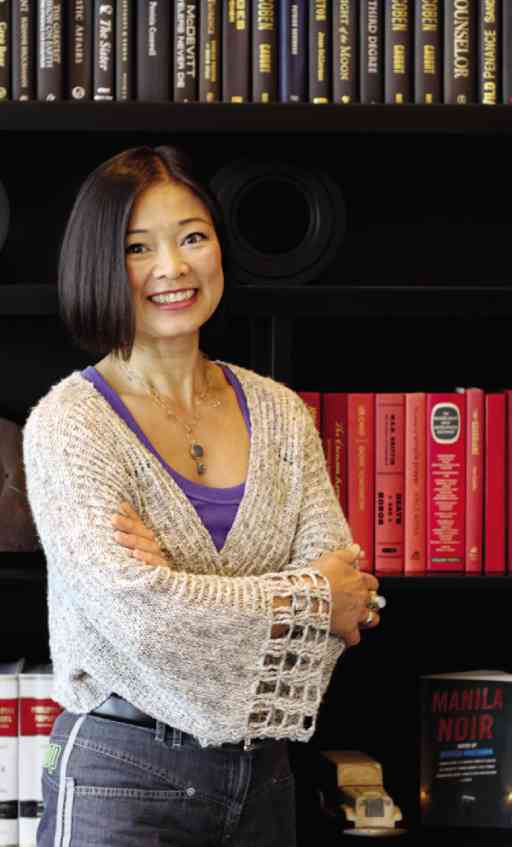 The fateful turns in our lives are sometimes abrupt and definitive. But other times, the turning points happen almost unnoticed over a period of time.

For writer Marivi Soliven, it has been a time of transformation  from the time she moved permanently to the United States in 1995 until now, coming home to Manila to push her excellent, engaging novel “The Mango Bride,” published by Penguin Random House.

Framed by the morning light in Raffles Makati, Soliven is lively and attentive. There is no sign of an American accent in her Filipino, something surprising since Soliven’s day job is as a Filipino interpreter in San Diego. It was in that capacity that she encountered struggling Filipino immigrant women.

“This is my way of bringing women’s voices into the immigration question,” the 50-year-old writer explains. “Not necessarily if they want to be immigrants, but what do they do now that they’re there. I just felt it was necessary to break the cliché of Pinoy going to the States for a better life in the land of milk and honey, and I wanted to show the other side.”

The road to “The Mango Bride” begins in very different places. Maria Victoria Vega Soliven was born the middle child in a brood of three to former Philippine National Bank executive Manuel Soliven and wife May Monica.

“When I started writing, I had just come from advertising as a copywriter, and because of that, what I wrote was necessarily short. I never set out to write for children but (former Bookmark, Inc. publisher) Lory Tan thought that my story ‘The Unicorn’ would lend itself well to illustration.”

That book came out in 1992. Since then, Soliven had published 10 books for younger readers, many for Tahanan Book for Young Readers, and won awards for it.

But children’s literature wasn’t what the self-taught writer wanted to do.

“What happened is, I got put in that niche and I felt limited by the vocabulary and the range of topics we could discuss, and when you’re in the United States you discover the market is very varied.” It was by writing about life for Filipinos in the US that she made a shift. It was a logical, seamless and permanent move into writing for an older audience.

After meeting at UP, she and literary critic John David Blanco got married. It was in 1999 that she experienced a “paradigm shift.” In 1999, she was writing for the website Leg Manila about Pinoy life in the States.

Those essays would eventually become the book “Suddenly Stateside,” published by Milflores Publishing.

That book effectively begat her novel.

“‘Suddenly Stateside’ is kind of a prequel to this,” Soliven explains. “A lot of the topics I tackle in the novel are pretty much discussed there. When it came time to write a novel, I said, ‘I have to force myself into the long form, or I won’t get published in the States,’ so I thought I’ve already gone through the thought process that helped me with these ideas, and so I’ll just throw it into the mix.”

In November 2008, Soliven participated in the worldwide writing exercise called the National Novel Writing Month (Nanowrimo) and produced the manuscript originally called “In the Service of Secrets.” In 2011, that novel would go on to win the Carlos Palanca Memorial Award for the novel.

After landing a one-book deal with New American Library Penguin (now known as Penguin Random House), she worked with editor Sandra Harding and heavily reworked the novel over an eight-month period, moving the protagonists Amparo and Beverly on parallel paths, fleshing out several characters, cutting out some earlier parts, and filling in the gaps in later portions, particularly in Amparo’s case.

“She became a much more well-rounded character,” Soliven says.

It was Soliven herself who came up with the new title, having an employee of the mail-order bride agency say: “The girls are all so sweet that we call them our Mango Brides.”

The resulting work is confident and engaging, leaving readers who will sincerely care about what happens to Amparo and Beverly. The novel is a quantum leap from her earlier work, and showcases Soliven writing at a much higher gear, hinting that she is approaching the heights of her powers.

“The Mango Bride” follows the willful Amparo Guerrero, who is banished to the States after disgracing her wealthy family; and the hopeful Beverly Obejas, who decides to become a mail-order bride to escape her lot in life.

“The Mango Bride” is a multi-generational tale of poverty and privilege, of romance and hate, loyalty and infidelity, family and strangers. It’s also a book of secrets, as one character says: “Too many lives have been ruined by these secrets.”

There are violent moments in the novel—a stabbing, a car crash, and worse—but perhaps the most violent event  is how Amparo and Beverly are both wrenched from the lives they know and dumped in terra incognita due to circumstances.

“Just the idea that you are leaving this whole network of family, friends and places and move to a country where people don’t necessarily understand or sympathize with you.”

Even Amparo, she points out, who is well educated and comes from wealth, struggles because “in the Philippines, she comes from a certain social background, but there she’s a nobody.”

Amparo, like Soliven, works as an interpreter and effectively synthesizes many of Soliven’s ideas.

Meanwhile, Beverly is the novel’s sacrificial lamb, she says. “She is the pure soul who wants to better herself.”

“The Mango Bride” also serves as a damning commentary on the industry of mail-order brides. Soliven clarifies the brides themselves are not to blame.

“It’s the process and the company that facilitates these transactions.”

“It’s really creepy,” she says, adding that she visited an advertised website for mail-order brides and found “it was like Amazon.com, except with women. And they looked like jailbait. Next to their names, you had ‘Add to cart.’ It’s like you’re really buying her.”

In her work, Soliven had encountered Filipino women who were obviously mail-order brides, and observed they were quite naïve and believed they were going to be equals in the marriage. 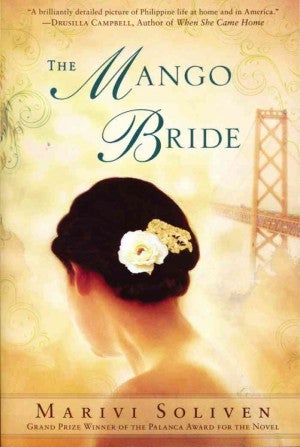 “These were my assumptions,” she says, “that they weren’t well educated and weren’t aware of their rights.”

She characterized the business of sending mail-order brides as a form of human trafficking.

Soliven says  “Mango Bride” is a commentary on the equally naïve notion in marriage that “it’s going to be easy as long as you love each other.”

In the Filipino, Catholic context, Soliven says no one wants to admit that there are simply marriages that don’t work. “The idea of a broken or a difficult marriage runs counter to what is presented as the ideal.”

Getting published by a big American publisher was a quest that had its highs and lows. Soliven received seven or eight rejections and admitted to crying over each one.

But when her agent called with the good news, Soliven described it was a “Miss Universe” moment: “It was early in the morning, I called my husband, I was crying, I was laughing. I was just so giddily happy. Wow.”

She has been on an extended book tour, doing everything she can to promote her book, traveling from state to state, holding book parties. National Book Store brought her to Manila, and while here, she will be attending one reading after another.

Her Penguin Random House deal is only for “Mango Bride,” but Soliven says “once you get your foot in the door, they’re open to look at your stuff.”

So now Soliven is working on her next novel, not wanting to say much about it except that it is a historical novel about immigrants and it’s very different from “Mango Bride.”

There’s no sequel forthcoming. “I don’t know how long it’ll take me to write,” she says, explaining that “Mango Bride” took her two years to write and that wasn’t a historical novel. She is working hard to make sure she gets her details right.

She’s certainly putting in the hours. She writes from 6 to 8 every morning (“my holy hours”) because that is the only time she is alone. She stills writes every day, putting in the requisite two hours at her desk in the patio.

Her writing has been understandably delayed by her book tour and necessary repairs to her house after a leak. In her little spare time, she does yoga religiously. “I also really like to cook, and that’s why food is a strong part of the novel.”

She lives in San Diego with husband John, who teaches at the University of California in  San Diego; her 10-year-old daughter Sofia; and two cats, Butters and Merlin.

Reviewers have compared “Mango Bride” favorably to the telenovela, as the television soap-opera mini-series is known, because of is gripping, dishy nature. She doesn’t have much experience of the telenovela or teleserye except for catching a few scenes from the Mexican “Marimar,” but she doesn’t mind the comparison.

“I think that’s because I’m obsessed with movies in general, and I remember many Filipinos, including my father, being obsessed with America as it’s seen in the movies,” she says. “I can’t tell you how many times I’ve heard Filipinos say that.”

“Mango Bride” is bursting with long-kept secrets, and Soliven is certainly dedicated to the business of revelation on many levels, as well as the continued portrayal of the lives of Filipinos in the United States then and now.

Even when she is in San Diego, her work talks about the Filipino. Now she’s here to introduce Filipino readers to “The Mango Bride,” and so many things are different.

“I want them to enjoy the story,” Marivi Soliven, the writer transformed, concludes with conviction. “I want it to be a true and accurate depiction of their experience.”

The UST Center for Creative Writing and Literary Studies, with the National Book Development Board  and National Book Store, will host the lecture and book launch of Marivi Soliven’s “The Mango Bride” on July 30, 2 p.m., at the Tanghalang Teresita Quirino, G/F Benavides Bldg., UST campus, España, Manila. The affair is open to the public.