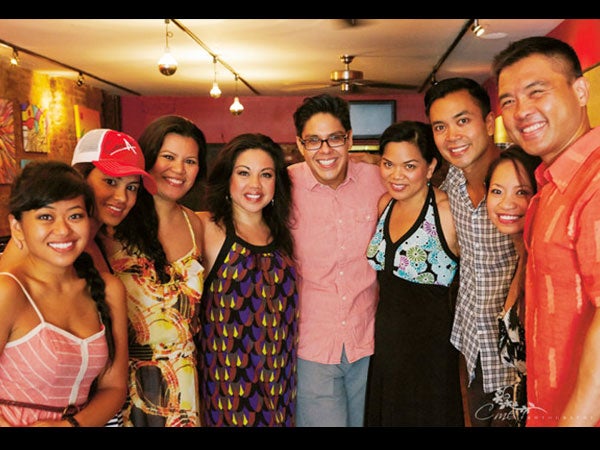 NEW YORK—Without a doubt, “Here Lies Love” is the hottest ticket in town, making it one of the most successful off-Broadway musicals of the year.

Just how successful was it? The musical extended its run at the Public Theater not once, not twice, not even thrice. Four times.

Set within a pulsating dance club atmosphere, “Here Lies Love” is now the second longest-running show at the Public. Here, the audience gets the chance to participate in the story. If you’re a show fanatic, think of it as “Fuerza Bruta” meets “Sleep No More.”

Composers David Byrne and Fatboy Slim deconstructed the astonishing journey of former first lady Imelda Marcos, retracing her meteoric rise to power and subsequent descent into infamy and disgrace at the end of the People Power Revolution.

New York Times best describes the show’s new genre—“It’s theater for the crowdsourcing era. Some view this as a new egalitarian phase in the actor-audience relationship; others promote it as a rescue for theaters in dire financial straits. What remains to be seen is whether involving the crowd—or, more cynically, exploiting its vanities — can lift ticket sales and outcompete Netflix-connected screens.”

Last week, we spent a Sunday afternoon with the cast over plates of pancit, tapsilog, tocilog, longsilog and bistek. Award-winning writer and editor Randy Gener organized the kapihan along with the Filipino American Press Club and held at the Ugly Kitchen in the East Village, which is now led by chef Aris Tuazon and his team.

Jose Llana plays the role of Ferdinand Marcos, and he plays it with such stern authority. Ruthie Ann Miles tackles the role of Imelda with a delicate yet robust performance. She was referred to during the brunch conversation as an honorary Filipina and she wears that badge proudly.

“It has been such a unique, wonderful experience. I’ve never had the opportunity to tell a story like this before,” Miles told the Asian Journal. “The cast has been so accepting. Sometimes, they would speak in Tagalog and they will explain to me what they were talking about and share bits and pieces of culture and history.”

The cast members talked about how open the show’s creators are to suggestions and comments, which was why the show turned out to be what it is in the present. Like that line where Imelda throws a super-crunchy expletive directed at her husband.

“David (Byrne) reached out and asked some Tagalog words that can be incorporated into the show. Like how does one curse in the native tongue. We told him “P*******a mo!” and next thing I know, he incorporates it into the lyrics. I have in my iTunes David Byrne singing ‘P*******a mo!’” Llana said laughing.

“The show has been quite collaborative between the creators and the cast. I can’t even begin to tell you about the minor and major changes that were made from last year just because the cast members had stories to tell, because I found a little bit of information, sent it to David and he put it in the show,” Miles added.

The show is neither a period piece nor a biography, neither a play nor a traditional musical but an immersive theatrical event combining songs influenced by four decades of dance music, adrenaline-fueled choreography, and a remarkable 360-degree scenic and video environment to go beyond Imelda’s near-mythic obsession with shoes and explore the tragic consequences of the abuse of power. It is not every day that the audience gets to stand, dance and move with the actors.

Yes, it was that immersive. “The Filipino aspect of the show aside, what’s most exciting about ‘Here Lies Love’ is that Alex Timbers and David Byrne created really ground-breaking theater experience. It’s theater that no one has ever seen before. It puts the audience not just as spectators but they are part of the action,” Llana said.

Melody Butiu, who plays the role of Estrella Cumpas, Imelda’s best friend growing up, believes that the show is helpful in educating people more about this part of Philippine history and in shedding more light about the character of the former first lady.

And to the naysayers who wonder if her character is fictional, Melody had this to say. “She actually existed. She lived with Imelda and helped to raise her for several years. She’s documented in Carmen Pedrosa’s biography about Imelda. It’s interesting because some people feel like, ‘Oh, if I haven’t heard of it, then it didn’t exist’,” she added.

Butiu is also beyond happy to have worked with a great cast and crew, including their director Alex Timbers. “I’m a big admirer of his work and he is so fantastic to work with. He really trusts his actors, he’s a big collaborator and at at the same time, he has a strong vision,” she said.

Timbers previously directed “Peter The Starcatcher” and “Bloody Bloody Andrew Jackson.” This month, he is directing a new musical adaptation of William Shakespeare’s “Love’s Labours Lost,” set to premiere at the Delacorte Theater’s Shakespeare in the Park summer series.

Nathaniel Claridad still can’t believe that the show is closing. “I am in denial about the show closing,” he said laughing. “But I am confident that there will be a future life for this show, and can’t wait to have a ‘Here Lies Love’ reunion with this wonderful cast and crew.”

Claridad auditioned for the very first workshop of the show two years ago. He was walking along Park Avenue when he received the call that he was in. “I literally started jumping up and down on the street like a crazy person,” he shared.

A Filipino-American, Claridad said his parents did not talk to him about this part of Philippine history. It was only after watching the show did they open this conversation. That is why he is very thankful for the opportunity to be a part of “Here Lies Love.”

Asked about their biggest take-away from their experience, the cast members gave varied responses. “When people come together and they believe in one cause, a grand thing can happen. The People Power Revolution is an example. It was because people came together with one heart, one mind and a magnificent and powerful thing happened. Just like this show,” Miles said.

“This experience is a rare one. The show is a hit, and the entire cast loves each other. The two combined make for a rare and special experience that is difficult to describe,” Claridad said.

Like Claridad, cast member George Salazar said he feels fortunate to be a part of the first workshop of the show back in 2011, where he spent a week working with David Byrne, Alex Timbers, Annie-B, and a few of the current cast members.

“Honestly, I had no idea what this monster of a piece was going to become. We workshopped the first third of the musical leading up to Imelda and Ferdinand’s wedding,” Salazar said. The Filipino-Ecuadorian (‘You can call me an Ecuapino, or should it be Filadorian?’ he asks) left his current show and joined “Here Lies Love,” which he now calls the most incredible experience of his life.

“This production is hands down the most electrifying theatre piece I’ve ever been a part of and I am honored and incredibly grateful to be there every night. It’s proven night after night to be a powerful show that moves everyone regardless of their connection to the Philippines (if any) and I’ve never been prouder to be Pinoy,” Salazar added.

See more at:  An afternoon with the cast of ‘Here Lies Love’