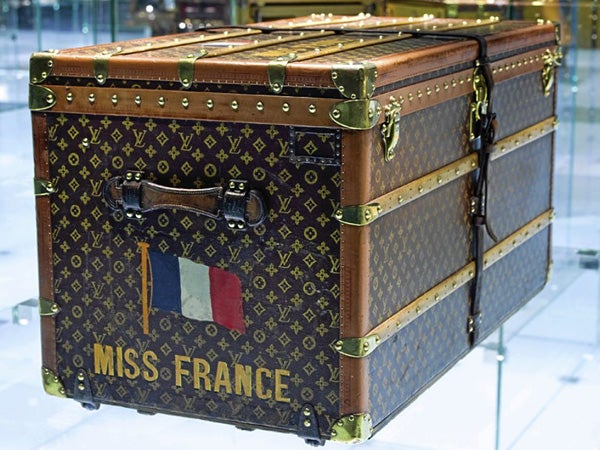 Not even an injury that had Yves Carcelle in a wheelchair was going to keep him from the biggest Louis Vuitton event ever mounted. The CEO of the French luxury house figured in a slight accident, which required some medical attention for his foot.  Nonetheless, his spirits were high and he was at his congenial best when he arrived at the Lan Club in Beijing.

The mood-lit restaurant was the setting for the private dinner, with international guests flown in for the opening of the “Louis Vuitton Voyages” exhibit. Lifestyle Asia had been invited as the Philippine representative and was given a place of honor in Carcelle’s table, right across him.

It was a casual affair in the only Philippe Starck restaurant in China. Contemporary Cantonese cuisine was served under black hand-made baccarat chandeliers in a room where

The space in the Central Dining Hall, while expansive, engendered intimacy in the arrangement of couches and chairs around a table that allowed proximity without being uncomfortably close. Positioned as a fashion landmark with an artistic environment, the exclusive club at Twins Plaza was as much a part of the statement Louis Vuitton was making in the mainland’s capital.

“Louis Vuitton Voyages” opened at the National Museum of China, covering 4,000 sq m in reputedly the largest repository of art in the world. The temporary exhibit, which runs till the end of August, is contained in four especially constructed halls, annotating the history of the Maison.

Two hundred carefully selected pieces in cleverly designed displays retrace moments since the Malletier was established in 1854. “Since that time, Louis Vuitton has elegantly combined tradition and innovation that characterizes the French lifestyle,” Carcelle said over champagne and lobster starters.

“Louis Vuitton has been keeping alive that particular French trait that so skillfully blends tradition and innovation, making luxury a cultural heritage. It is the fullest expression of a refined art of living.”

The man who runs run the luxury retail behemoth lives much of what he speaks. A passion for sailing had him restoring a boat right down to the specifications of the original make.

Great lengths were taken to bring back the look and interiors of a model of a very limited issue. Specific wood had to be sourced that naturally curved to the contour of the initial design. Each part came together through painstaking work and patience. There were no shortcuts.  It was savoir faire, a core value of Louis Vuitton, that places a premium on know-how, quality and craftsmanship.

The glint in Carcelle’s eyes as he talked about the boat project remained bright when the subject shifted to art. An avid collector of contemporary works, he spoke warmly of the works of Chinese sculptor Zhan Wang, whose installation comprised Room 1 of the exhibit. “His newest works will invite you to discard conventional bearings,” he said.

Louis Vuitton has had strong engagements with art since it was established. “Visual artists, designers and architects infuse Louis Vuitton with their own vision of the luxury world,”

Carcelle said. “Often it is unusual, sometimes disconcerting, but always stimulating. These pioneering incursions by art into the world of tradition have helped, by subverting its codes, to renew the Maison’s vocabulary and express its creativity with even greater excellence.”

This strong connection of Louis Vuitton with art and design was spread out in two rooms, either mounted on specially designed glass displays or suspended from hot air balloons.

That “Louis Vuitton Voyages” was mounted in China, and underscored a relationship which began with the opening of a store in Beijing’s Peninsula Hotel in 1992. The exhibit is a prelude to the 20th anniversary of Louis Vuitton in China next year.

“The National Museum of China was the only one in the world that could accommodate the exhibition,” Carcelle said.

It speaks volumes that Yves Carcelle, who is conversant in several languages, is having his five-year-old son learn Chinese. He himself is unable, but it is not for lack of trying.  “At least someone in the family will know how,” he said, smiling broadly in reference to his youngest. This is some indication, not just of how forward looking Carcelle is, but of how he perceives the development of future enterprise in the world market will be.

The Frenchman brought the company to China 20 years ago. It was the very first luxury house to hang a shingle in the mainland. This was a bold step into the country that had eschewed privilege for many years under an ideology which espoused communal sharing of goods and services. Change was transpiring and pronouncements of the Chinese leadership towards market liberalization and economic reform eventually was confirmed as businesses and foreign investments burgeoned. Louis Vuitton led the charge among premium retailers. Others have since  beaten a path to what has become one of the fastest-growing economies with an appetite for branded consumer goods. Meanwhile, LV now counts over 60 stores throughout the vast eastern Asian country.

Carcelle is widely held as the man responsible for the giant strides that has catapulted the company to the forefront of the luxury retail industry. His business astuteness may not have been the most apparent during the dinner where his charming attentiveness and relaxed mien had put everyone at ease. There was, however, a glimpse of his resoluteness when he chose to stand for a photograph, ignoring the bandaged limb and entreaties of his staff to just sit down. He obliged the cameras, balanced on the other foot and accommodated graciously. The following day, he came to the opening reception, shod in leathers. Nothing was going to keep him down on the night of what he called “the greatest exhibition Louis Vuitton has done in the world.” He mentioned, before parting, that he would be off to another continent in the morning for the launch of his newly refurbished sailboat. It seemed immaterial to ask how he would fare on the incapacitated appendage. There was a foregone conclusion that he would manage, and manage quite well.

Sobrepeña is the editor in chief of Lifestyle Asia where the “Louis Vuitton Voyages” exhibition is featured in the August issue.