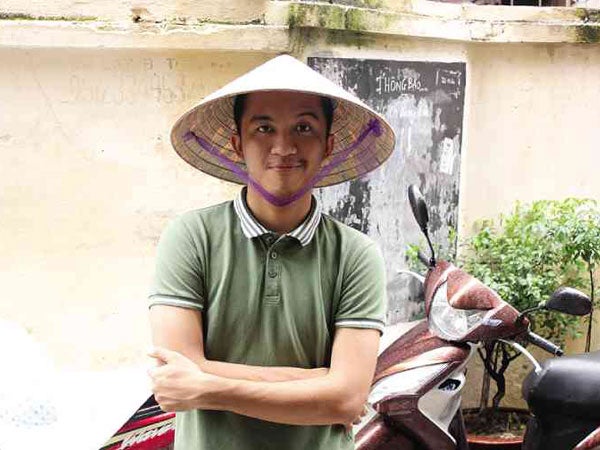 I have been following an American TV comedy series. It is about this girl from Manhattan who was dragged by her father to move to the suburbs, in a town called Chatswin.

I did not know it at first, but after watching 22 episodes, I discovered that my fondness for the show is actually a reflection of how my life in Hanoi parallels Tessa Altman’s life in Chatswin.

The word “odd,” however, doesn’t aptly describe Hanoi. This city seems unusually familiar because everyone looks Filipino. At the same time, the city feels different because of the food, the language and the community’s lifestyle.

These contrasting characteristics of Hanoi, when brought together, create a challenge for me. No one knows I am Filipino until I start talking (or not talking, because I don’t speak Vietnamese). I think there is nothing worse than being a stranger in a city where no one knows you are a stranger.

I get into awkward scenes where people walk up to me and speak in Vietnamese. But more than that, I discovered that I am expected to immediately adapt to my new environment and do what everybody else does because I will be living here for a year, and I don’t really have any sort of visual indicator (like blond hair or white skin) to invoke my right to be exempted because I am a foreigner.

Transportation here, for example, feels like a rusty roller coaster to me. The roads of Hanoi are undeniably crazy, with throngs of motorbikes here and there. The existing element of danger, however, creates an unusual thrill for adventure-seekers; the same element just freaks me out.

Like Tessa, who endlessly ranted about how much she wanted to go back to Manhattan during her stay in Chatswin, I also ranted about how much better I thought Davao (my home city) was in terms of transportation. Back home I would drive my car; there were jeepneys and taxis to fall back on, too.

Eventually, I learned to deal with the transportation challenge. I was given a bicycle, which I have now learned to ride with pride.

These are the same kinds of people I have around me in Hanoi.

Like Tessa, I dealt with my differences with the Vietnamese by kicking out the angst from my head, and making bigger room for cultural tolerance, learning and understanding.

I have been told that the Vietnamese are friendly. It is true. Some are really sweet. Others are really just too rowdy, rough and lacking in social graces (e.g. overusing a vehicle’s honking device, invading personal space and spitting on the ground almost anywhere). But, what country doesn’t lack in social graces?

I have resisted countless times the urge to wear a WTF look on my face by avoiding situations where I would be provoked. Like Tessa, when I see that bad things are about to happen, I smile and walk away.

What I find praiseworthy, however, is the strong sense of family and respect that the Vietnamese have for their elders. It’s amazing how tight their bond is with their parents. This is something that I see fading in the Philippines, as evidenced by the strong individualistic culture that the West has created in us.

Respect is also evident in the Vietnamese language, where extensive salutations are used for everyone in the community. “Ban,” “anh,” “chi,” “em,” “co,” “ong” and “ba” all have certain uses to address someone with respect.

Food is another thing I have to deal with.

In “Suburgatory,” Tessa often finds herself dining in familiar places, eating familiar food. She lives with the comfort of an American fridge and she often gets to dine with her neighbors, who are also kind enough to share casseroles at her doorstep.

In Hanoi, I feel home-sick where food is concerned. Dining options are not as varied as home, and the number of noodle shops I see every day makes me not want to eat noodles at all.

Back in the Philippines, I often eat rice with an assortment of Filipino viands. I can choose to eat something different every day, too, if the rice starts to bore me. There’s pizza, pasta, tacos, burgers and barbecue (I made a short list because a long one makes me hungry). Back in my city, McDonald’s was a basic human right (okay, maybe it’s not; maybe I am just too spoiled with the convenience of having drive-through and 24/7 access to fast food).

There aren’t a lot of dining choices in my neighborhood in Hanoi. Restaurants close at 9 p.m., too! This caused me to take on the challenge of cooking, lest I end up whining about the difficulty of finding something good to eat. Small Vietnamese restaurants have also taught me to appreciate dishes that are unique to this side of the world.

I now enjoy eating Nem Cua Be (fried crabmeat springrolls), My Xao Bo (stir-fried noodles with beef), Bun Cha (rice noodles with grilled pork) and Banh Cuon (rice noodles with flavorful toppings like grilled pork, shrimp meat and toasted garlic flakes). The Vietnamese Pho (noodle soup) didn’t make it to my list of favorites because I just don’t like it! The strong herbal presence of Mui Tau (cilantro) in the noodle soup turns me off.

I probably have not lived long enough in Hanoi to have a good knowledge of what the city and its people are really like. My judgments are based on first impressions; that is why I always give myself ample space and tolerance to hit the “like” button no matter how crazy Hanoi life gets.

I have been here for three months now. Every day here has become a chance to discover something amazing and new, or to frown at something.

Either way, I have learned to live in the moment because good or bad, I know it will not last forever. And I would not have the option to hit the replay button because, unlike Tessa, I don’t live in a TV show.

Jesse Ramon P. Boga is a fellow of FK Norway’s Environmental Communication Exchange Project in Asia. He is residing in Hanoi, hosted by the Vietnam Forum of Environmental Journalists. Follow him on Twitter and Instagram @jesiramoun. Visit his blog, http://writingdetours.wordpress.com/