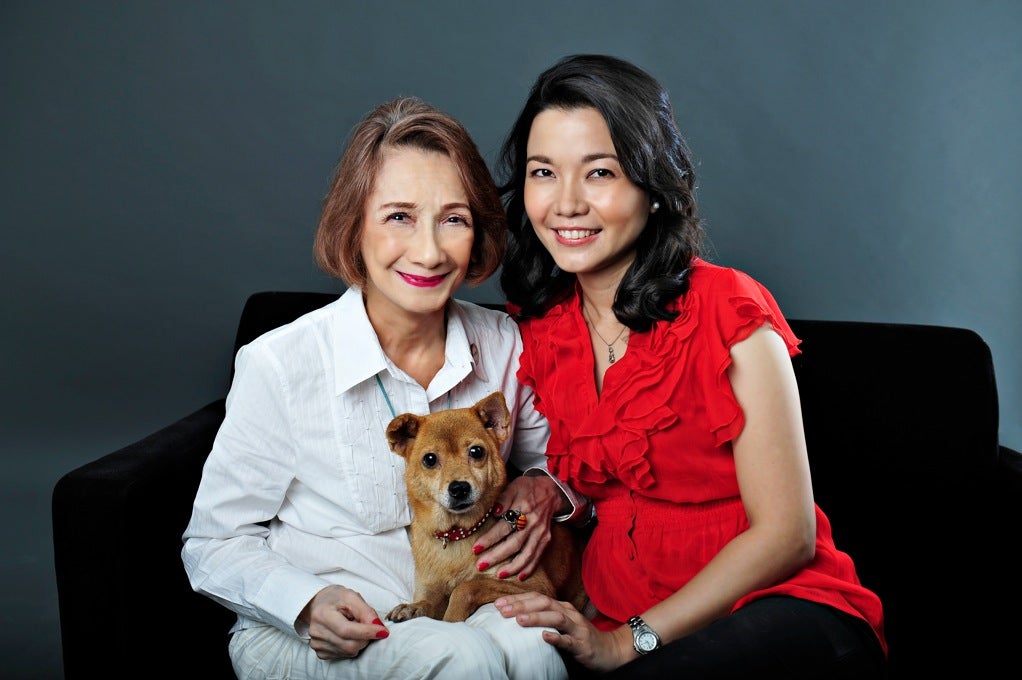 Years ago, when Anna Cabrera first met Nita “Tata” Lichauco on the phone, she didn’t expect the founder of the Philippine Animal Welfare Society (PAWS) to be “above 30. There was so much energy and passion in her voice.” Much to Anna’s surprise, that boundless energy and passion were coming from a wisp of a woman who traces her fierce love for animals “from the day I was born. We forget ourselves,” explains Tata, 83, of how she manages to subdue the likes of drunken, knife-wielding dog meat traders despite her fragile frame. Learning to live with phone threats to her life and strange cars driving past her house, she admits, “Whenever we go out, we are scared stiff! But when we see the cruelty being done to animals, we get so angry, we forget ourselves. And so far, we’re still alive!”

It’s a kind of courage she shares with Anna, who made the bold decision to give up the security and perks of her long-time banking job to turn her volunteer work with PAWS into a full-time career in 2006.  “When I came into this, I just wanted to be behind Tata while she did everything,” admits Anna, 37. Instead, the program director of PAWS has not only participated in her fair share of dangerous dog fight raids and tracked down individuals involved in inhumane animal practices, she’s slowly becoming the face of the non-profit organization founded by British educator Muriel Jay in 1954, then revived by Tata with the help of fellow volunteers in 1986. “I have never heard anyone speak Tagalog so beautifully,” swoons Tata of Anna. “And she’s tougher. Tough!”

“She’s even worse than me!” responds Anna with a laugh. “I’ve become emboldened because of her.”

While the still feisty Tata now limits herself to PAWS’ launches and ribbon-cutting ceremonies, her presence alone remains uplifting. “Volunteers who meet her for the first time say, ‘I’m so inspired to have held her hand,’” says Anna of Tata, who helped see into law the landmark Republic Act 8485, or the Animal Welfare Act, in 1998.  “She has that effect on people.”

Someday, this program director hopes to do the same. “When I came into animal welfare, I was so passionate, I would rub people the wrong way,” says Anna. “From Tata, I learned to be gentle even while speaking my mind out. I would be so honored if someone would tell me that I was at least 10 percent like Tata.”

Time and distance apart apparently do little to affect the relationship between Cebu-based designer Yvonne Quisumbing and her mentor, veteran fashion designer Jojie Lloren. Absorbed in conversation before and during Yvonne’s makeup session, the two talked about everything from “fashion and business to love life!” she confesses with a self-conscious giggle. “He’s easy to approach, very warm. Whenever I have concerns, he gives very good advice.  He’s very knowledgeable and I respect his opinions.”

Yvonne first consulted him while preparing an entry for the 1999 Makuhari Grand Prix, a design competition that would eventually recognize her piece with a special citation. Even back then, it was clear to Jojie that the young designer had promise. Faced with a complex creation of piña jutting out of abaca strips, her interpretation of leprosy, she explained, he remembers being in awe of her polished workmanship and out-of-the-box inspirations. “Nakakaloka itong babaeng ito,” he recalls thinking. “Malaki ang future nito.”

Yvonne’s undeniable talent, coupled with her unassuming, demure, and soft-spoken nature, has given her “a special place in my heart,” says Jojie. As such, this mentor to many designer hopefuls (including the contestants in the Philippine version of the hit US reality show Project Runway) is not one to mince words. At last May’s Philippine Fashion Week, where she presented a stunning 20-piece collection in a highly-anticipated back-to-back show with Lyle Ibanez, he saw through photos how her clothes—dubbed “wearable art” by fashion pundits—evolved. Critical about the way she used to encrust her outfits with expensive and ornate details (“’Day,” he’d ask her, “magkano mo ibebenta ba yan?”), Jojie now notes that while her touch is still there, “her clothes are more feasible in terms of commercial viability.”

As for her four-year hiatus from fashion to pursue photography, filmmaking, and visual art, and work for a magazine, Jojie told her, “Don’t spread yourself too thin because you will not be a master of any one of those fields. You’re a very good fashion designer,” he told her frankly. “Mag-fashion design ka na lang, ‘day.”

“When you’re young, you want to try something new. I was soul-searching,” Yvonne would explain her sudden leave from 2006 to 2011. While her absence allowed her to delve into all forms of design, it was also an opportunity for her to realize “that fashion is number one for me.”

Looks like she took her mentor’s words to heart. “Are you back?” Jojie asked her when the two bumped into each other in an event on the eve of this photo shoot and interview. Yvonne broke into a big smile and laughed. “Yes!” she exclaimed.

She was a faculty secretary, taught high school for three years, and served as the high school principal of the University of Santo Tomas (UST) for a decade. Yet when Professor Clotilde Arcangel had former HR manager Ica Marquina, 34, and GMA 7 newscaster Pia Halili, 32, she didn’t think twice about leaving her career to stay at home with her two girls. “There’s no time to miss work when you take care of your kids. Taking care of children is a full-time job!” declares the hands-on mom, who eventually went back to work; she has been dean of UST’s College of Education for the past 12 years. “I always correct my students whenever they say their mother is ‘just a housewife.’ Your mom is not just a housewife! She works 24 hours a day and you should be proud of her.”

That’s exactly how Pia feels. Blessed to be raised by her mom, Pia and her husband, sportscaster Mico Halili, now do the same for their 5-year-old Mickey. “My schedule used to be much heavier,” admits the mainstay of the early morning show Unang Hirit, and the anchor of the noontime news program Balitanghali and the weekend edition of 24 Oras. Lessening her field work and choosing shows that free her up for most of the day allow her to spend “literally, every minute I’m not at work with my daughter,” says Pia. “I was there for her first day of school and other important activities. Because of the example my mom set, I don’t say yes right away to work. If there’s a conflict, family will always be my first priority.” Would she, like her mom once did, shelf her career completely for the sake of her children?  “If it came to a point where I didn’t see them anymore or I see them struggling without me,” says Pia, “then I would.”

Needless to say, Clotilde approves. “I never told my husband she didn’t grow up the way I wanted her to,” she says when asked what she thought of her younger daughter as a mother. “I have no complaints. I’m very happy.”

This Daddy’s Girl grows up to be just like him

When Bianca Valerio found out she was pregnant at 21, it seemed easier to break the news to her mom Mimi (who was then in the hospital for a blood disease) than it was to her dad, the no-nonsense, ultra-conservative Reuben.  “He didn’t take it well,” says Bianca, who eventually broke up with the father of her child. “He was upset and disappointed. From that time on, I felt it was never the same.” “She was too young,” reasons the elder Valerio today. “Plus, I didn’t think the guy was the right one for her. As a parent, you have a gut feel for these things.”

No one, though, could have predicted the changes that occurred once the family welcomed its first apo, Natassia, now 10. Miraculously, Mimi healed from her condition, baffling even her doctors. And Bianca, the self-described Daddy’s Girl, grew up. “More responsible, more ‘tame,’” says Reuben with a chuckle of the youngest of his three kids. “Complete turnaround. The incident made her a better person.”

Unknowingly, he had everything to do with it.  Admitting to having “the oddest taste in men,” Bianca realized that her father, a sweet and loyal husband to his wife of 43 years, set the bar high for the kind of man she should go for. Jaded in the past by relationships that didn’t always end happily ever after, Bianca decided instead, “I don’t want to find someone who is like him—I’m going to be like him. So even if a guy leaves me, I’m still intact. I feel this is the best way of honoring my father.”

As is succeeding in business, which Reuben, who has ventures in machinery and IT, managed to do from scratch and through sheer hard word. “I could really talk to him like an adult. He’s very encouraging yet practical. He keeps me grounded,” says Bianca. Sure, jobs like modeling and hosting live events or the Lifestyle Network TV show FASH, aren’t exactly careers from his generation—when Bianca told her dad she was going to be a makeup artist, he asked, “Magbubukas ka ng parlor?”—but the elder Valerio remains quietly supportive. “She’s very detailed, full of ideas,” says Reuben, who once sat from 3 to 6 am, patiently listening to his daughter brainstorming.

Having endured bullying and other challenges growing up, Bianca recalls her father’s triumphs from his own struggles as a self-made man. “If he can face his hardships and come out the way he did, then dude, bring it on,” says Bianca, who draws on her own experiences whenever she talks to teens in her new capacity as a personality development coach. “My dad made me feel like it’s okay to not be perfect. Your flaws are what make you perfect.”