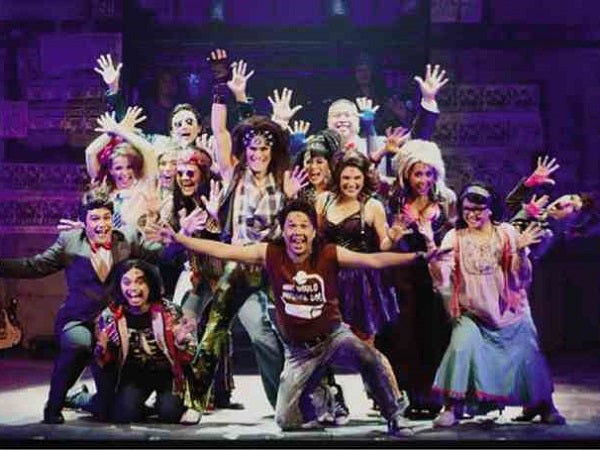 ATLANTIS Productions’ topnotch vocalists in “Rock of Ages”—first-rate singer-actors, all of them—were fully aware of their main artistic mission, which was to create fun characters.

This ‘Rock of Ages’ earns its rockin’ ovation

The New York Times theater critic Ben Brantley, in a 2009 article titled “Want to Applaud a Broadway Show? Don’t Get Up. Really,” lamented the fact that standing ovations these days have become a “reflexive social gesture, like shaking hands with the host at the end of the party,” instead of a genuine postshow manifestation of roaring approval. Plus, “a standing ovation,” he continued, “seems to help confirm that the money wasn’t wasted.”

Enter Atlantis Productions’ recently concluded “Rock of Ages,” which played to sold-out houses almost every performance during its three-weekend rerun (a success it similarly enjoyed when it first played the Carlos P. Romulo Auditorium in RCBC Plaza, Makati City, last year). At curtain call, or even before the lights came up, the audience was quick to get on its feet, clapping and cheering and even dancing along to the band as the cast took their bows.

Forget Brantley; this clearly wasn’t some random social reflex at work. With Atlantis’ staging of the 2009 Tony-nominated musical, the standing ovation that capped off every performance couldn’t have been a more rightful ending—no, make that the only rightful ending.

One may argue that “Rock of Ages,” which incorporates classic rock hits into an otherwise vintage storyline (book by Chris D’Arienzo), already had its ovations preordered. Despite a rather prosaic attempt to weave no less than five storylines into a timeworn saga of dreams and passion, it’s the music—borrowed jukebox music, it must be emphasized—that’s the main attraction here.

That Bon Jovi’s “Wanted Dead or Alive” is featured in the first act and REO Speedwagon’s “Can’t Fight This Feeling” in the next should be guarantee enough that even first-timers to the theater are bound to recognize the music and invariably sing along (but hopefully not).

And, since “Glee,” how can anyone resist jumping up and down to an ending that, to some degree, theatricalizes Journey’s indefatigable “Don’t Stop Believing?”

Label that manipulative and you somehow have a point. And yet, you’re also beside the point. Because this is a show that clearly knows what it wants to achieve and is very overt in that intent; to reward it with an ovation would, in effect, only affirm that one had been all aboard the riotously fun journey from start to finish.

That journey revolves around the fall and rise of the Bourbon Room, a fictional club down the Sunset Strip in 1980s Los Angeles. There’s Dennis, the Room’s owner, and his assistant Lonny, who also functions as the show’s narrator, both struggling to fight off German father-and-son team Hertz and Franz from rendering the club inexistent.

There’s Drew, Bourbon Room busboy, dreaming of one day making it “big,” and Sherrie, typical small-town girl who’s come to the city to be an actress. There’s Stacee Jaxx, a sort-of rock legend, who’s back at the Bourbon for one final show with his band. Also, there’s a strip club owner, a corruptible mayor and a city planner who becomes a rallyist, among others.

There are no tragic twists here. The closest the show got to an earthshaking character development would probably be Lonny and Dennis’ Act Two declaration of closeted love via “Can’t Fight This Feeling” (arguably the musical’s comic highlight). But the objective was simply to buckle up for the whimsical drive down the Sunset Boulevard of undeniable happy endings. To look for depth and intensity of the Stephen Sondheim kind would only be self-defeating.

Here, also, was a show that could occasionally be self-conscious—and make that trait work to its advantage. D’Arienzo’s book has characters breaking the fourth wall (meaning, they address their lines to the audience); at one point, Lonny reminds Drew that “he’s in ‘Rock of Ages,’ the musical we’re doing.” But not only that; for a relatively paper-thin plot (despite the multitude of characters), D’Arienzo has actually written a show that flows as smooth as Skyway traffic on good days and does not scrimp on the laughs.

Check out Franz fighting off accusations that he is homosexual with a cultural touch: “I’m not gay! I’m just … German!”

Or we can leave the material alone, resort to a more simplistic explanation, and say that audiences were driven to their feet at curtain call because “Rock of Ages”—suavely steered by director Chari Arespacochaga—surely qualifies as one of the most well-crafted productions Atlantis has delivered of late.

Here was a cast of topnotch vocalists—first-rate singer-actors, all of them—who were all fully aware of their main artistic mission, which was to create fun characters. Even wildcard Vina Morales was more than merely passable in her stage debut as Sherrie.

When we speak of Atlantis’ “Rock of Ages,” we remember Bibo Reyes, in the role of Franz, flamboyantly prancing onstage to “Hit Me with Your Best Shot” in body-hugging pink, and being lifted on the belly and legs by the female ensemble for a flying superhero-pose finish.

We remember Aiza Seguerra playing nerdy as the city planner Regina, and then, moments later, returning onstage in fishnet stockings and black bikini in a cameo as a transgender stripper. We remember Nyoy Volante (Drew) and Rachel Alejandro (strip club proprietor Justice) displaying the rarely heard (onstage, at least) crunchier, edgier sides to their voices.

We remember Mig Ayesa, Stacee Jaxx in the Broadway and US touring productions, reprising the role with hypnotic charm and the kind of sexed-up magnetism only a legitimate rock star could pull off.

But mostly, we remember—and should remember—Jett Pangan, in the role of the butt-shaking, jazz hands-loving Lonny, who randomly popped up in the middle of scenes to just jab at ongoing conflict or hasten the story’s progress. Pangan’s perfect combination of comic timing and spot-on delivery was testament to the fact that not only could he be ravishingly heartbreaking (remember 2011’s “Next to Normal?”), but also downright hilarious. His was, in fact, this “Rock of Ages’” funniest performance.

It’s one of those rare shows built on the flawless fusion of performers and technicals (in particular, Lex Marcos’ appropriately dingy set design for the Bourbon Room, complemented by Joaquin Aranda’s lights to give that authentic rock concert feel).

So, yes, the audience easily bestowed nightly standing ovations upon “Rock of Ages”—and rightly so. If not to assure themselves of their money’s worth, it could only be to genuinely cheer for a show that had given them every reason to do so—for having watched, enjoyed, even fallen in love with, one of the year’s finest pieces of theater.