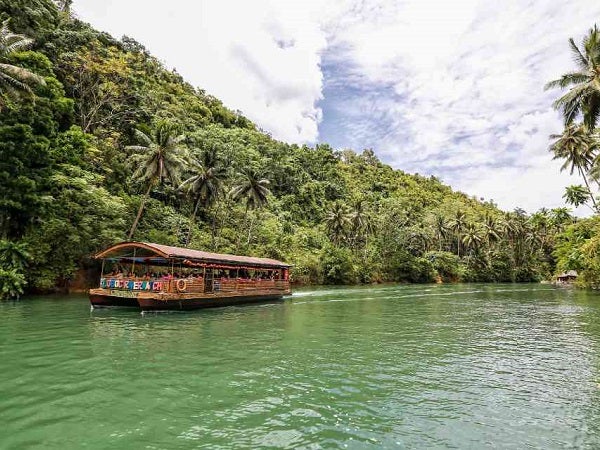 It was a little over three years ago when I first visited the island paradise of Bohol just off the coast of Cebu. I was fortunate enough to have traveled with a colleague who showed me that traveling was, still is, always fun when you share the experience with someone.

I have been back there several times but always alone, so I was excited when Justine, my 8-year-old daughter, decided to join me on a visit. She had been dying to see Bohol since she learned about tarsiers in school.

Our trip, however, did not start out that well—our flight was delayed. No surprise there.

Though the flight itself was not bad, we lost most of the morning, arriving in Tagbilaran close to noon. But that was just a minor setback; Justine and I were ready for our adventure.

First in our itinerary: my daughter’s long awaited encounter with Bohol’s smallest inhabitants.

The drive was shorter than I remembered. In no time we found ourselves at the entrance of the Philippine Tarsier Foundation.

The Foundation, a 7.4-ha sanctuary northeast of Tagbilaran, is part of a 134-ha protected forest between the municipalities of Corella and Sikatuna. It is believed to shelter more than 1,000 tarsiers.

It was pretty humid and the trail had us going up and down through thick vegetation and trees. I was actually afraid of not spotting a tarsier and end up disappointing Justine. After all, according to Carlito Pizzaras, the grounds supervisor, each tarsier needs about 1 hectare each to live. Fortunately, the guides go out early in the morning to look for them and they were able to guide us to several within a few minutes.

Immediately Justine went to work with her little Canon in hand. Flash photography is forbidden, but since she had been trained by the best (guess who?) she needed little help in capturing her new furry little friends.

Once we found the first tarsier, the others seemed to just pop up as if they knew a shoot was afoot. I knew Justine wanted to stay longer but it was getting late, so we had to move on.

We set off for the town of Loay to catch the Loboc River Cruise.

We hopped on what could only be described as a very large, roofed raft. Justine was a bit puzzled; she could not make out what it was. I just told her that it was just like “the gondolas in Venice, except bigger.”  She smiled at me like I was nuts. The trip on the placid green tributary was a stark contrast to our speedy ride to the boat terminal, but that was for the best. We would not have been able to enjoy the beautiful scenery if we traveled any faster.

The huge trees, lush greenery and the sound of the water were very relaxing; we could have done without the live entertainment. Actually it was just a guy with a guitar singing songs from the ’70s.

Food was served, buffet-style, but to be honest, it was not as good as I remembered.  While pork barbecue and chicken inasal are Justine’s favorites, the food was served cold and was a little dry. At least the fruits were quite fresh. If the trip operators want to impress guests, keeping the food warm and appetizing would be a good idea. Also, including lechon might be worth considering.

Our next stop was the famous Chocolate Hills near the town of Carmen. This is actually one of two viewpoints on the island that have been developed as tourist destinations.

Along the way we passed the man-made forest. A story goes that several travelers stopped to take pictures in this forest and were surprised to see in their photos the images of a “white figure.” The town folk claim this was the spirit of someone who died in the last World War. Whatever, Justine was just fine that we were not privileged to have this sighting.

The main viewpoint is reached after a climb of 214 steps. Justine smiled when she saw the unique shape of the hills. “Daddy, they look like Kisses,” she said. Named aptly for their resemblance to my favorite Hershey’s treat, the cone-shaped hills stretch out over 50 square kilometers.

It was a little after 3 p.m. when we got back to the van, and we were a long way off from Panglao island, our final destination for the day.

I was pleasantly surprised to find out that tarsiers were not the only creatures Justine would meet in Bohol. On our way back from Chocolate Hills, we stopped briefly in two more places.

The first was the Simply Butterflies Conservation Center near the town of Bilar. A guide took us around the net-covered garden. The tour could be quite informative if people actually cared to listen.

The second was Prony the Python. She was big. This 26-foot-long Philippine Python measured only about three feet when she was captured. She has grown to become the largest of her kind in captivity in the world.

Images of a giant snake swallowing us whole crept into our minds, but the handlers were very good at putting our fears to rest. We approached her, camera in hand, the caretakers right behind us.

By the time we finished with Prony it was getting dark, so we made one last stop at Baclayon Church, one of the older churches in the country. We did a quick walk-through, then headed off to Panglao Bluewater Beach Resort on Panglao Island.

Opened three years ago, the resort boasts 54 rooms spread over 6 ha. It’s big enough  not to be too crowded even at full capacity, yet small enough to be cozy—something not many 200-room resorts can replicate.

Our accommodation was perfectly situated in one of a pair of two-story buildings lining the main lagoon pool. Tastefully decorated in minimalist style, our poolside deluxe rooms came with two double beds, a flat-screen TV and a large bathtub, which my daughter fondly referred to as a “soup bowl.”

There was also free WiFi access, which allowed Justine to stay in touch with her Candy Crush buddies.

Our next day started early, as we did not want to miss the morning again. Justine decided that, after a whole day of driving around the island, we would stay put in the resort to enjoy the water activities.

We headed off to the beach. Unlike other resorts on the island, Panglao Bluewater has no natural beach. Instead it has a nice reef, which is perfect for sailing, kayaking and snorkeling. We did all of them. Justine’s favorite was definitely snorkeling.

I taught her about a year ago, so now she is already comfortable floating around on her own—though not far away from me.

The resort’s glass-bottom boat gives you a great view of the reef teaming with marine life. But being the adventurer that she is, Justine preferred to see these “fishies” up close. Before I could even set my camera, she was already in the water.

She could have stayed there the whole day if I let her, but we had to move on.

After an active morning, the afternoon started off a bit slowly. We started with a quick, 20-minute open-air massage. When she heard about this I noted a little grin on her face. Back home she usually asks me to give her a quick massage to help put her to sleep, so I knew she would love this.

She did some arts and crafts after that, as I went around to take some pictures.

By the time I got back, she had just finished making a bead necklace and bracelet for her mom. It’s always comforting to see that there are still activities your child can do that do not involve an iPad.

Her next activity was a muffin baking class. She likes helping her mom in the kitchen, so flour, chocolate chips, bowls and blenders are right up her alley.

She came away from this class with 12 freshly baked muffins which she happily gave to those who made her day an unforgettable experience.

Sometime between making the beads and putting the muffins into the oven, Justine heard about fireflies. So, for our last activity of the day we took a van to the Loay River for a boat trip to view this natural phenomenon.

The boat ride was actually not that different from our Loboc River Cruise, except that now, we were traveling in pitch-black darkness.

The experience is one of those “ahhhh” moments—you just can’t quite figure out what you’re seeing yet you marvel.

We were both beat after the day’s adventures. As Justine pulled out her journal, I hopped into the shower. I almost forgot about dinner, so I walked back to the room  to ask her what she wanted. I was hoping to share an adobo rice served in bamboo stick, one of the resort’s specialties.

A beautiful sight greeted me in the room—there  she was, already fast asleep, pen in one hand, her camera on the other, probably dreaming of our time together.

As I put her things away and covered her with a blanket, I stole a glance at a passage in her journal: “I have to come back with Josh and Mommy…” Well, at least I knew she was hooked.