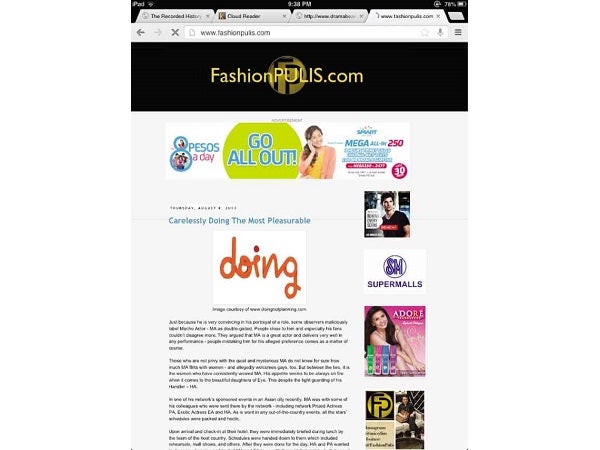 That was the collective cry in the room as this writer shared the findings—more like figures—on an assignment about top-earning Filipino lifestyle bloggers.

The information was met with both awe and disbelief. At least three of my colleagues are bloggers; one is award-winning at that. None of them, however, makes a cent from their respective blogs—by choice and principle.

It was good the room where we were having our Lifestyle staff meeting was somewhat soundproof, or we would’ve gotten some serious shushing and disapproving stares from across the newsroom.

Up until we spoke to industry insiders (advertising, public relations) and new-media experts these past weeks, proof that some popular bloggers make better-than-good living from their little hobby was nothing more than anecdotal.

Two well-known, big-bucks-earning bloggers confirmed the figures, and so did several industry professionals. Most, however, agreed to speak only on condition of anonymity, for fear of earning the ire of clients, or “spark hatred and envy, and catch the attention of the BIR,” as one of the bloggers put it.

According to the blogging network Nuffnang Philippines, “Lifestyle and Personal” comprise the biggest category of its 32,000 blog-affiliates, with over 60 percent. Nuffnang knows the revenues—at least to an extent.

The job of Nuffnang, which has been in the country for more than four years and has a presence across the region, is to find advertisers for its affiliates. It works on a profit-sharing basis, varying from 50-50, 60-40, to 70-30 share, explained Abe Olandres, Nuffnang country manager.

Nuffnang ad rates range from P100 to P250 depending on the size and placement in the blog page. Ad payments range “between 50-70 percent based on traffic, clicks, leads or a combination of any of the three,” Olandres added. Meaning, a blogger is paid based on the number of visitors to his blog, or actual clicks on the ad.

At Nuffnang, for instance, target traffic is about 90 percent local; meaning, it won’t count if the traffic comes from outside the Philippines—unless the advertiser is targeting international visitors.

But such an example is only applicable to small-time players.

A banner ad—the ad on the top of a blog’s homepage—may command up to seven figures per annum for a blogger like Chuvaness or Fashion Pulis (www.fashionpulis.com), sites that command heavy visitor traffic, Olandres said.

It’s not atypical for brands to negotiate for annual lockout of a popular blog’s banner ad, he added.

Other bloggers can bring in the moolah not just from ads, but also for product/service features.

Like ads, rate cards for features or blog posts may vary, from as low as P10,000 per post to up to six figures for posts by more popular bloggers.

“Sometimes, they’ll agree to just wear and keep the clothes or shoes and post the photo on their page,” said Grace, a PR executive, referring to the #ootd phenomenon, hash-tagged social-media-speak for ‘outfit of the day,’” or brand-itemized posts of one’s daily fashion getup.

“But when they don’t like the brand, they ask for cash per post, per outfit, on top of gift certificates.”

This applies to the young fashion and lifestyle bloggers, Grace noted. “Some get clothing sponsors, so you may see them posting #ootd’s with certain brands always thrown in in their getups.”

Donald, another PR executive, said he pays only for #ootd with GCs, never with cash. “In our firm, we insist on not paying cash for such posts because we don’t want to set a trend. Apart from GCs, we might give only product packages for them to raffle off in their blogs, just to increase their traffic.

“As for food bloggers, you just need to feed them. Tech bloggers, you don’t need to do anything because they need the content. We don’t give out gadgets; we only loan test units.”

Meanwhile, Hope, who also works in PR, said she has experienced paying bloggers from P10,000 to P50,000 for several features/posts for a period of one month.

“Five in 10 clients now request for a blogger or social-media component. But for paid posts, it doesn’t work like an advertorial where the client has to approve the content. The blogger still has autonomy.”

“The more established bloggers, like Chuvaness or the Bag Hag, don’t ask to get paid for featuring a product,” Grace said of her experience. “Instead, they’d ask you to buy an ad on their page, and they’ll give you mileage. The number of posts may vary depending on your MOA (memorandum of agreement).”

These agreements are often coursed through the ad agencies, though PR firms may sometimes negotiate for a client.

While the likes of Chuvaness and Epperson may have all-local brands and companies advertising on their blog, The Bag Hag’s advertisers are all high-end international retailers and shopping sites, like net-a-porter.com, luisaviaroma.com, Lane Crawford and Harrods.

“I’m strictly against charging per post because, then, anyone can buy your blog,” said Faith, unanimously listed by insiders as among the top-earning bloggers. “For banner ads, I attend their events and use their press releases. Also, it’s a given that I can’t write anything negative about their products or services. When they buy an ad, typically I would announce their event, attend it, and even write a post-publicity thing.”

Faith’s blog was registered as a company with the Securities and Exchange Commission a few years ago. She stressed that she issues receipts for all her transactions and thus pays her taxes.

“I’m scared of being hounded by the BIR, so I took measures to make all my transactions legal. I have all the documents.”

Faith said her button ads cost about P50,000/month. And does she get paid for tweets, too? She replied with a laugh. “I’m very cheap!”

She charges P5,000 per tweet to her thousands of followers. “I heard [name of popular celebrity] gets paid P2 million per 20 tweets!”

It’s very easy for bloggers to cheat on their tax obligations, said Olandres, himself one of the country’s most successful bloggers, who’s behind the technology news blog YugaTech (www.yugatech.com).

Like Faith, Olandres’ blog is registered as a company. “Minimum tax for ads is 2 percent, but that increases exponentially at 15 percent if you’re making more than P700,000 per annum. When negotiating, a blogger may insist with the advertiser to absorb the tax. The advertiser may just list it as ‘entertainment expenses.’

“It’s easy to get away with it if you’re dishonest because there may be no paper trail,” he added. “Payment is upfront. The only thing the BIR can do, I guess, is to do a lifestyle check on erring bloggers.”

Olandres, a BS in Chemistry and Computer Engineering graduate of the Ateneo de Manila, began blogging full-time in 2005. At the time, he would make up to $5,000 a month via Google AdSense, though he clarified that that figure wasn’t consistent.

“When eventually I hired an accountant, he advised me to declare as much as I want, but it should also be significant,” he said, noting that a blogger can very easily not declare his/her earnings from foreign advertisers.

YugaTech in its infancy used to get 150,000 page views a month; these days it averages 1.5-1.7 million visits per month, not including the 25,000 daily e-mail and RSS subscribers.

Olandres has hired two full-time editors and two part-time contributors. “I normally have around 75-percent fill rate,” he said of his ads.

Quantifying the returns of advertising in blogs and paying bloggers to plug a product is a difficult, if nearly impossible task, according to Grace.

“There’s a metric system. The basis [when tapping a blogger] is the number of followers and traffic,” she noted. “And there’s also the number of engagement. Let’s say, the blogger or celebrity may have one million followers, and s/he gets 10,000 likes for a post. That’s the active engagement. They create ‘noise’ for the brand.”

Which means, it’s useless to have a million followers if there’s very little active engagement.

Grace cites an instance when one popular blogger, as a favor to her firm, announced a one-day sale event of one of their clients. “The post came out on the eve of the sale. When the mall opened, there was a long line at the store. By afternoon, it was sold out.”

That, however, doesn’t happen all the time, Grace noted.

“With young bloggers, we tap them mostly for imaging. They’re good for the image of the brand. Their followers may not have the buying power, but they’re aimed at the aspirational market. Young people want to identify with them.”

She added that, like Hope’s, most of her company’s clients now ask for a social media component. “Even brand principals now ask us to have top bloggers in their events. Of course, nothing can be had for free these days. You probably won’t believe it, but these young bloggers even have agents and managers negotiating for them. A not-so-big celebrity may ask for P50,000 for appearance fee, with two posts on Twitter or Instagram.”

Apart from direct payment from their blogs, some lifestyle bloggers have also parlayed their online activity into other paying gigs, like brand endorsements or collaborations.

It’s easy to abuse the power that comes with being a famous blogger, according to Faith, who acknowledged that she enjoys the material perks: “freebies, GCs, trips.”

“How do you say no when products are being thrown your way?” she asked rhetorically. “You can’t write about everything that falls on your lap. And frankly, some bloggers can’t even write. And because they can’t write, it’s easy to tell that a post was paid.”

Even as she still enjoys heavy traffic on her blog, Faith said she has noticed that fewer people are reading blogs since the advent of Instagram. “I say this because there are fewer comments on my blog now.”

If one’s goal in setting up a blog is to make money, he or she may only end up getting dismayed, said Olandres.

“I guess a lot of people think that there’s big money in blogging. My estimate is that only about 0.1 percent of bloggers will actually get something significant from blogging, and even less will make good living out of it.”

For paid features, Olandres said Nuffnang encourages its affiliates to disclose that it’s a paid post. But the operative word there is “encourages”; there are no set codes to police erring bloggers.

“I always advise aspiring bloggers to be passionate with what they do, and not focus on money as the priority. Otherwise, they will only get disillusioned and frustrated, then they give up [altogether],” Olandres said. “Remember that the Internet is merely a tool and it can cut both ways. It comes with heavy responsibility.”