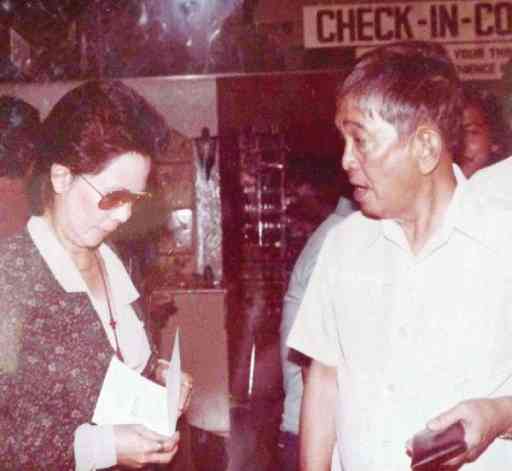 PHILIPPINE Daily INQUIRER editor in chief Letty Jimenez Magsanoc with Serafin Lanot at the book launch of his “Astrology through Filipino Eyes” in November 1982.

An exciting exhibition and series of talks will be held to commemorate the birth centennial of poet, journalist, publisher and astrologer Serafin Lanot and to mark the role of astrology in Philippine culture and history.

“Poetry of Stars: An Overview of Astrology in the Philippines” will be held at Lopez Memorial and Library, Aug. 15 to 17.

The exhibition will feature Lanot’s and other leading astrologers’ personal astrology and publishing paraphernalia, such as charts and even an astrological computer, as well as a letter written to him by Corazon Aquino after he had predicted her ascendancy to the presidency in 1986.

A former editor of Manila Chronicle Sunday Magazine and author of “Astrology through Filipino Eyes,” Lanot was a leading figure in the introduction of astrology in the Philippines in the 1980s. He was the only Filipino astrologer invited to the International Conference of the American Federation of Astrologers and was a member of the AFA convention faculty in the ’80s.

Born on Aug. 21, 1913, in Boac, Marinduque, Lanot served as the director of the Bureau of Printing. He also wrote and edited for several publications. He is the father of poet Marra Lanot, wife of writer Jose “Pete” Lacaba.

The talks will be led by writer-astrologer Resti Santiago, founder of Astrology Friends Philippines, a group for Filipinos keen on learning astrology.

Topics include a short overview of the history of astrology in the Philippines and the contributions of Lanot and different personalities to Philippine astrology, including precolonial indigenous astrological practices of Filipinos.

Santiago has written astrology articles and columns for various print and online publications. He is the author of “Medieval Astro Clock,” an astrology guide published annually since 2011.

“No prior knowledge of astrology is required to appreciate the exhibition and talks. We want to get more Filipinos interested in astrology,” he says.

Talks are scheduled on Aug. 15, Wednesday, at 1:30 p.m. (Brief History of Astrology in the Philippines and Lanot’s contributions to Philippine astrology. A poetry reading follows, to be led by poet-writer Kris Lacaba, grandson of Serafin); and on Aug. 17, Saturday, at 10:30 a.m. (Indigenous Astrology in Colonial Philippines) and 1 p.m. (talks on different astrology topics by several astrologers). Contact 6359545 or 6312425.