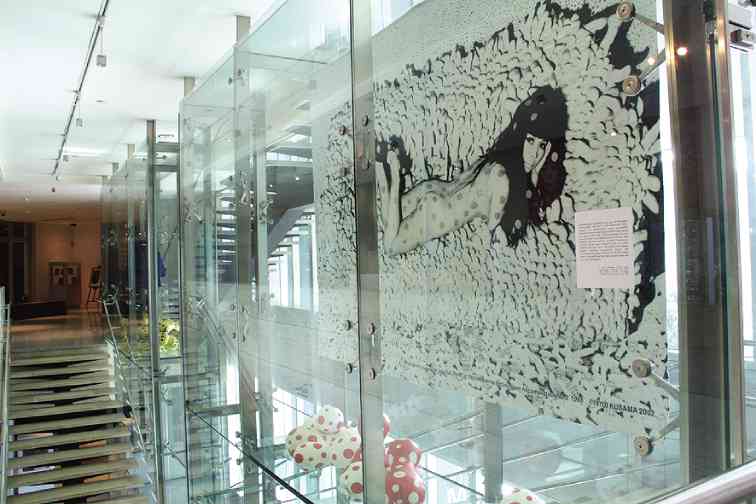 BLOWN-UP image of Yayoi Kusama inNew York in the early 1960s, posing nude in imitation of a pinup girl

Largely neglected today by art history, Yayoi Kusama was all the rage in the art world in the radical 1960s. She became the first Japanese woman to receive the Praemium Imperiale, one of Japan’s most prestigious prizes for internationally recognized artists. Now 84, she is considered Japan’s foremost modernist.

Kusama is a contemporary of Pop artists Andy Warhol and Claes Oldenburg, quasi-surrealist Joseph Cornell, minimalist Donald Judd, all of whom she inspired one way or another. Her influence is so, one can even trace it in the work of Damien Hirst.

Three of her most widely imitated works are the soft sculpture (now credited to Oldenburg); the mirror room (credited to Lucas Samaras); and the repeat image (credited to Warhol). An important voice of the avant-garde, she has been acknowledged as a precursor of Pop Art, Minimalism and Feminist Art.

The extravagant show has been mounted with the assistance of Japan Foundation-Manila and the guidance of Ota Fine Arts, Yayoi Kusama Studio, and Los Angeles County Museum of Art. It is presented as the first in the museum’s Collectors Series, and held in celebration of the 40th anniversary of the Asean-Japan Friendship and Cooperation and the Philippines-Japan Friendship Month.

This exhibit is Kusama’s first major show in the country. It is presented under the heading of the museum’s newest exhibition program.

“Since we’ve been borrowing artworks from private collectors when we hold an exhibit, why not feature the whole collection itself?” says Kenneth Esguerra, senior curator and head of conservation at Ayala Museum.

The Collectors Series aims to “dig into the treasure troves of the country’s leading art and antiquities collectors; showcase selected pieces from private collections in curated thematic exhibitions, to expand the understanding and appreciation of local and international art. Through this, museum-goers can view works of art not usually seen in public, especially artists’ bodies of work.”

Esguerra started with the idea of featuring the art collection of Dr. Eleuterio “Teyet” Pascual, but when the man died early this year, they had to explore other options.

As it happens, Japan is celebrating a milestone this year, and Kusama has become hot again, thus this show. This is from the extensive Kusama collection of former Finance Secretary Lito Camacho and wife Kim, who used to host Sotheby’s Manila.

The couple began collecting art soon after they were married in 1980, starting with limited-edition Manuel Rodriguez Sr. prints.

“Because they were the best pieces we could get for our budget,” Kim Camacho tells Esguerra.

The couple would go to Heritage Gallery in Quezon City almost every weekend to check out its inventory, and soon they were buying more and more works by Filipino artists.

“It was only during our first stay in Singapore in 1998-2000 that we started buying foreign artworks,” says Camacho.

After seeing the Kusama exhibit at the National Museum of Modern Art in Tokyo in 2004, she says she was “completely blown away,” and decided to include her in their collection.

“Our first purchase was a small 1999 ‘Infinity Nets,’ followed almost immediately by several more,” Camacho relates. “When we asked Bea [their daughter, also an artist] what she thought of Kusama, she advised us: ‘Buy everything you find of hers.’ I was so enamored with Kusama that I tried to do that, with our limited resources as my only constraint. Yes, I was obsessive in my pursuit of Kusama. I spent hours on the computer reading about her, viewing images of her works all over the world, and hunting for available artworks.”

Last year, the couple visited the artist in her studio and had a talk with her for over two hours.

“Our collection of Kusama is now, without doubt, the most important in our entire art collection,” says Camacho. “I am obsessed with Kusama so I collect everything about her. I wear Kusama, read Kusama, buy Kusama, and go home to Kusama.”

In a talk with Bomb Magazine, she says: “I am an obsessional artist. I consider myself a heretic of the art world. I think only of myself when I make my artwork.”

She admits she has been suffering from obsessive-compulsive disorder and committed to a mental institution for decades. “My artwork is an expression of my life, particularly of my mental disease. My art originates from hallucinations only I can see. I translate the hallucinations and obsessional images that plague me into sculptures and paintings. All my works in pastels are the products of obsessional neurosis and are therefore inextricably connected to my disease.”

Kusama was born in central Japan to an upper-middle-class family operating real-estate and storage businesses and managing wholesale seed nurseries. She has been painting since she was 10, when she says she started seeing hallucinations.

“My mother was a shrewd businesswoman… but she was extremely violent,” she relates. “She hated to see me painting, so she destroyed the canvases I was working on. She beat me and kicked me on the derriere every day, irritated that I was always painting. She forced me to help the employees even when I had to study for my term exam. I was so exhausted that I felt very insecure at times.”

All her siblings were also against her painting, telling her to be a collector rather than a painter. It was this horrendous childhood that drove her to leave home.

“I went to Kyoto simply to flee from my mother’s violence,” she continues. “Because she was so vehemently against my becoming an artist, I became emotionally unstable and suffered a nervous breakdown. It was around this time, or in my later teens, that I began to receive psychiatric treatment.”

When she arrived in New York in the late ’50s, Action Painting was the rage. Pollock, Rothko, De Kooning and the Abstract Expressionists ruled. But she wanted to “be completely detached from that and start a new art movement.”

With only her mentor Georgia O’Keefe trying to help her find galleries that might be interested in her art, she held her first solo show within 18 months of her arrival.

She explored what we would now call a multimedia platform: painting, sculpture, drawing, collage, installation, happening, fashion, film; then later, poetry and fiction, print; even designing cell phone, bus and hot-air balloon. And she excelled in all.

“I ran all over the battlefield of art,” she says. “So many ideas were coming forth one after another in my mind that sometimes I had trouble knowing what to do with them.”

Polka dots symbolize disease, she explains, while the nets symbolize horror toward the infinity of the universe. The male sexual patterns on women’s clothes, shoes, hats and furniture are an expression of her fear of sexual vision.

But symbolism can vary. She has been quoted as also saying: “A polka dot has the form of the sun, a symbol of the energy of the whole world, the source of life; and also the form of the moon, which is calm, round, soft, colorful, senseless and unknowing. Polka dots become movement. Polka dots are a way to infinity.”

(On the obvious influence of her repetitive motifs on Warhol’s serial imagery after he saw her 1964 show “Aggregation: One-Thousand Boats,” she says: “Andy was a person who incorporated everything indiscriminately in his art as if he were running a wholesale business of imitations.”)

In 1973, after traveling through Europe and staging her happenings and fashion shows in its major cities, she returned to Japan when her health deteriorated.

With the death of Cornell (with whom she had a decade-long sexless relationship), she suffered severe depression; and, in 1975, checked into a Tokyo mental hospital, where she chose to live on the advice of her psychiatrist.

“He suggested I paint pictures in the hospital while undergoing medical treatment,” she says.

In no time, she also created a big sculpture of a rowboat covered with stuffed canvas protuberances on the hospital’s yard.

Thus she was gradually forgotten by the art world, until in the late ’90s, a traveling retrospective of her seminal works opened in Los Angeles, toured through New York and Minneapolis, and concluded in Tokyo. Thus she was “rediscovered,” and has since been exhibiting in Paris, Vienna, Odense in Denmark, Seoul, Sydney, Melbourne, Wellington, and Madrid.

Last year, an exhibition featuring works from her entire career opened at the Tate Modern in London. This year, hundreds of her artworks are exhibited until November at Daegu Art Museum in Korea. Her art was highlighted at the recent Art Basel Hong Kong, where another artwork of hers was the highest-price paid.

Here then at Ayala Museum is an excellent sampling of Kusama’s art.

On the ground floor are the representative artworks ranging from the intimate gouache piece to the full-scale oil-on-canvas triptych, from mirror boxes to environmental installations. Viewing the exhibit is like swimming through colors and shapes, drowning in psychedelic hues and delicate washes, gasping and gurgling through undulating forms and polka dots.

On a dim corner of the gallery is encased a folio of a limited-edition “Alice’s Adventures in Wonderland” that Kusama illustrated. On the final page she has written: “I, Yayoi Kusama, is the modern-day Alice in Wonderland.”

Of course. It was inevitable that she would identify with that little girl’s hallucinatory visions, sense of the absurd, terror, desperation and pain.