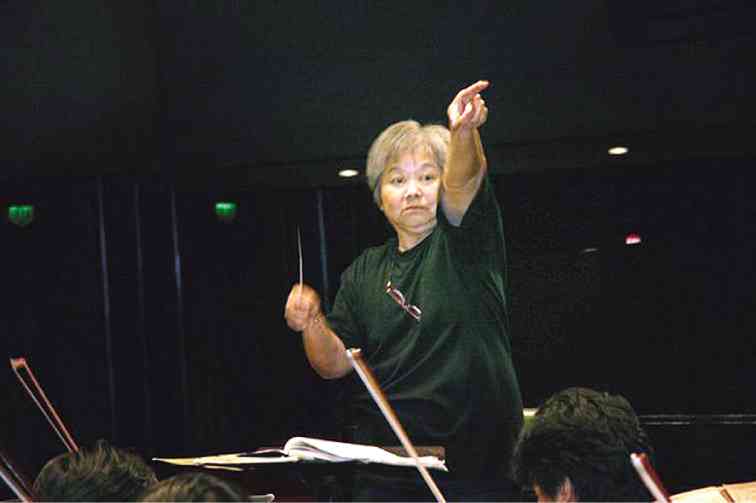 Helen Quach, the Australian Symphony Orchestra conductor who had graced the Philippine stage and performed with Philippine orchestras, passed away on July 31 in her home country. She was 73.

Quach began conducting in the Philippines in the late 1960s when she performed at the then newly built Cultural Center of the Philippines (CCP) upon the invitation of First Lady Imelda Marcos. Her last performance before her comeback was in 1991 (while Mount Pinatubo was erupting).

After a long absence of more than two decades, Quach came back in 2007 to conduct the Manila Symphony Orchestra (MSO) with noted concert pianist Cristine Coyiuto playing Grieg’s Piano Concerto. Also in the repertoire was Tchaikovsky’s Symphony No. 5 and Beethoven’s Leonor Overture. They performed at the St. Cecilia’s Hall of St. Scholastica’s College and at the CCP. They also performed at the La Salle Auditorium in Bacolod City and Silliman University in Dumaguete City.

Her Filipino fans in the early days attended her concerts. She had always been at home on the Philippine stage.

The last time Quach performed in Manila was in 2008. She conducted the Philippine Philharmonic Orchestra (PPO) for the opera “La Boheme” by Puccini for the Philippine Opera Company at the CCP. Later that year, she again conducted the PPO at the Meralco Theater for the Robert Coyiuto 85th Birth Year Celebration Concert that featured Cristine (piano) and Caitlin Coyiuto (flute).

Born of Chinese parents in Saigon, Vietnam, on July 4, 1940, under the Chinese Sign of the Dragon, Quach spent her early childhood in the French Quarters in Saigon. After graduating from a Catholic boarding school in Sydney, Quach studied music at the Sydney Conservatory of Music.

Quach’s road to world fame began with her winning first prize at the Mitropoulos Conducting Competition in New York, after which she became the assistant to the famous Leonard Bernstein. She was only in her 20s then, fresh out of the conservatory. She further honed her skills in Europe and traveled extensively. The world was her stage.

One of her feats was conducting in 1983 the “Sing-it-Yourself Messiah” by Handel with a crowd of 4,000 people in Canberra joining in the chorus.

Yet, at some point in Quach’s career’s dizzying peak, events conspired to send her spiraling into a gloomy depth. Suddenly she had to face, not an adoring audience, but only herself.

In a 2007 interview for the Sunday Inquirer Magazine, she confided: “This auditing was a desperate attempt to find answers to heal myself of terminal cancer and to mend my shattered ego and a broken heart. The philharmonic orchestra that I had successfully organized in Taipei was suddenly dissolved because of political strife, and a friendship became a soul-searing affair.”

Said the dragon lady of the podium: “I was brought down to my knees. There was only one way: to follow the mysterious ways and guidance of the Spirit.” Though raised as a Catholic, Quach explored other faiths.

After living in Taipei for several years, Quach went back to Sydney and lived in her home by the bay. She went through a healing process the natural way and refused surgery, chemotherapy and radiation, and survived cancer for many years. The sea was a source of healing for her. Swimming and snorkeling were her favorite pastime.

After her 2007 and 2008 concerts in the Philippines, Quach often came back, stayed on with her friend and music patron, Regina Dee. She did some farming in Cavite and even lived in Palawan for many months.

With the help of a friend, Quach’s CCP concerts have been digitized and burned into two dozen CDs. These will be donated to St. Scholastica’s College of Music. Among the concerts in CD are with famous Filipino violinist Gilopez Kabayao (Beethoven’s “Violin Concerto in D Major”). She performed with both Filipino and visiting foreign artists. Orff’s “Carmina Burana” for 220 voices is among the digitized concerts.

Quach is survived by her two younger brothers, Robert and Peter, both doctors of medicine. To her friends and fans, they sent news of Quach’s passing via e-mail, saying: “Helen passed away peacefully on Wednesday, 31st July 2013, after her long and brave battle with cancer.

James Coyiuto has announced that there will be an ecumenical Mass for Buenconsejo on Aug. 13, 6 p.m., at the lobby of the Coyiuto House at 119 Palanca St., Legaspi Village, Makati City.