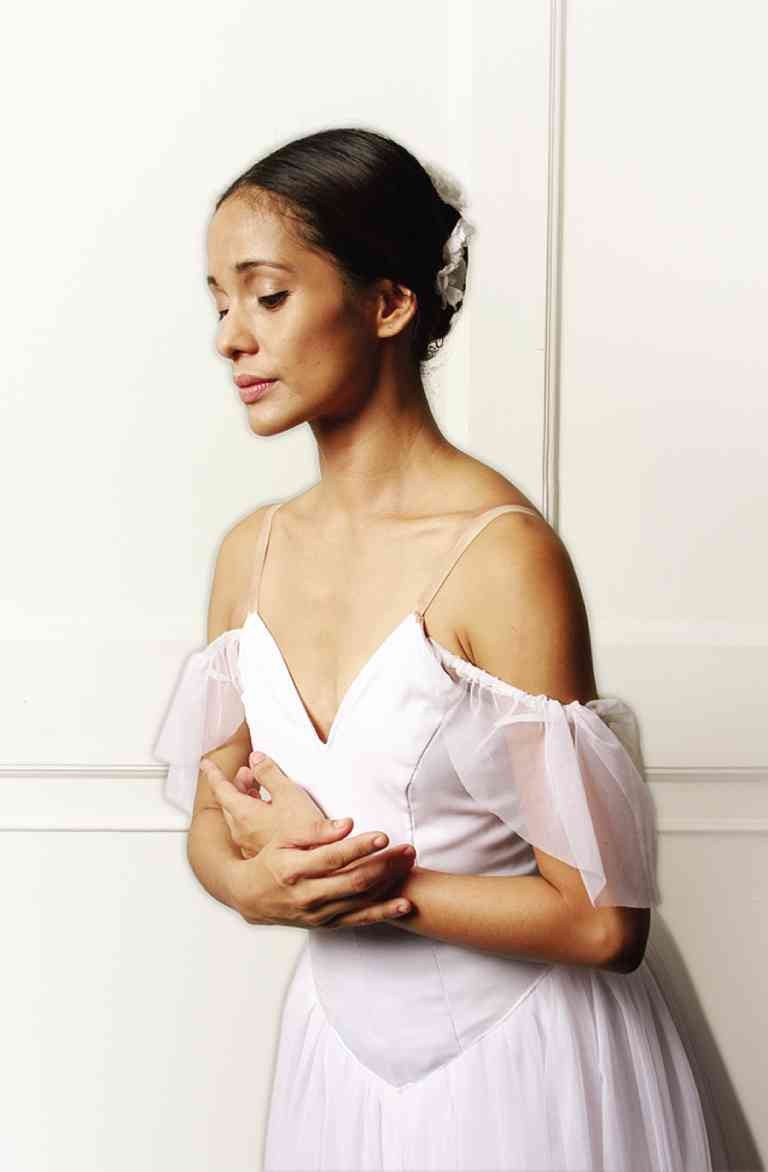 On opposite sides of the CCP rehearsal hall, the principal dancers of “Giselle” are quietly internalizing their roles. Katherine Trofeo, who is in the second cast of Ballet Philippines’ season opener, shrouds herself in silence while her partner, Jean Marc Cordero, draws a serious countenance as he preps up for his role.

Throughout the rehearsals, Trofeo and Cordero deliver with dramatic sincerity. In Act One, Trofeo is a vulnerable and girlish Giselle yet conscious of a budding sexual attraction to Count Albrecht. (She later tells the Inquirer that the interpretation of the 19th-century tragic heroine should not be of a Maria Clara but of an artless German peasant.)

Their attraction is manifested through their constant eye contact and dancing. It is her fragile health that makes her passion for dancing as fatal as her attraction to an aristocrat, who’s committed to someone else.

In Act Two, Trofeo’s technique is camouflaged by her expressiveness. Instead of a display of body line and lifts, the pas de deux becomes an incarnation of Giselle’s love and her wish to save Albrecht from being killed by the Willis (vengeful spirits of jilted virgins).

Trofeo is fortunate to have rapport with Cordero. As Albrecht, he shows that his affection for Giselle is genuine, and Cordero’s commitment and personal distinction make him seem natural for the part. Their dance becomes a conversation between two people who spontaneously get carried away by the emotions of the moment.

For weeks, former premier danseur Rafael “Nonoy” Froilan, who restaged the ballet, had been guiding the dancers. At the start of rehearsals, he says the principals were too mannered while the younger dancers still had to inhabit their roles. During the run-through, the leads finally nailed down the right emotions.

For Trofeo or any ballerina, Giselle is a dream role because of its heady mix of love, death and dance. Since summer, she has been reading up on “Giselle” and has watched interpretations by great ballerinas.

She admires Royal Ballet’s Alina Cojocaru, whose gestures and dancing transcend acting in Act One. The Romanian ballerina brings a childlike vulnerability, naïveté and passion to the role without any ballerina affectations.

For Act Two, Trofeo is inspired by the transcendent qualities of Julie Kent and Natalia Makarova, and Carla Fracci, the embodiment of the ethereal Romantic ballet style.

“I appreciate Cecile’s coaching. She has an introspective quality,” says Trofeo. “It is liberating for me to know that I don’t need to dance like someone else, but do something within my capacity.”

Expressiveness and instinctive interpretation are Trofeo’s strengths. When she dances, the eye is continually drawn to her expressive face—the deep-set eyes, the sculpted cheekbones and angular jawline. Her long neck extends from the poised composure of her shoulders, and her head is carried with distinction.

These were the same qualities that caught the eyes of dancer-choreographers Myra Beltran and Enrico Labayen. In the early ’90s, they established The Lab Projekt, a venue for their creative experiments. They invited Trofeo and Ronilo Jaynario, both dance majors at the Philippine National School for the Arts.

“Enrico taught sensation before shape,” recalls Trofeo. “If your heart and mind are into the dance, the body will follow.”

Trofeo rose from the ranks of Philippine Ballet Theater. After graduation from the state university, she took a job as segment producer in a TV health show for a production house. While the video editor would fall asleep, Trofeo found herself doing barre exercises.

When Beltran called Trofeo to perform for her production, the latter was literally back on her feet. She also guested for PBT, playing the lead roles.

In 2008, while guesting for a program at Greenbelt 5, Trofeo learned from a BP dancer that the company was holding auditions under new artistic directors.

Since she had an evening show at PBT, she went to the BP audition in the afternoon and took it as a warm-up class. She was immediately inspired by then co-artistic director Alan Hineline, who combined artistry and technical clarity.

After a week of taking BP company classes, she was taken in at age 30.

The first season was challenging. Trofeo admits her early training and experience didn’t provide her a solid foundation in ballet.

The choreographer’s works were filled with vibrant and powerful characters. Trofeo didn’t have the amplitude. Locsin couldn’t help but laugh at her.

In ballet, Hineline tactfully told her that although there were breath and fluidity in her arm movements, they lacked clarity in positions. While ballet requires softly curved arms, Trofeo had to be conscious of her droopy elbows. Still, for BP’s  third show, she ended up being cast in the title role of “Coppelia.”

Trofeo subsequently performed in BP’s Filipino classics such as Locsin’s “Igorot,” Alice Reyes’ “Amada” and “Rama Hari.” Working with BP’s finest dancers in their prime and learning its repertoire satiated her hunger for knowledge.

“What I like about BP is the depth of its repertoire and the sense of history,” she says.

She counts her role as the Babaylan in Locsin’s “Engkantada” as one of her favorites.

Still young at 35, the age of artistic ripeness for a dancer, Trofeo admits she’s feeling her age. Asked about being the “señora,” the oldest member of the company, she candidly replies: “It’s not so much the age issue but of being a mother and a wife.”

Although choreographers laud Trofeo for her dedication, there’s always her son Julio, 7, at the back of her mind. “Rehearsals end at 10 p.m., but sometimes we finish at 11:30. You can’t say, ‘I have to go home, my son is waiting for me.’”

She cites her greatest reward was Locsin’s validation of her performance in “Engkantada.” Trofeo quotes the choreographer as saying: “Before, I couldn’t even watch you. Now, you’re an Agnes Locsin dancer.”

“She thanked me for embracing her style. No award can match that acknowledgement,” says Trofeo.

How does she feel about being with younger dancers with the ideal body and stronger technique?

“I’m lucky to have been molded by Rico [Labayen] and Myra [Beltran]. I can always access my inner world. With them, I learned to be nonjudgmental, even to myself.

“Classical ballet is so cruel. If you allow yourself to be judged at every step, you will dance in fear. Once in a while, I feel I am not good enough. The younger ones have the energy, nicer lines and higher extensions. But I trust what my body has gone through already. Mikhail Baryshnikov once said we are never a blank canvas because of our life experiences. Dance is transparent. It will show what you’ve been through. So, if you lead a good life, you will dance well. It’s all a balance.”

“Giselle” will be shown on Aug. 16 to 18 at the Cultural Center of the Philippines.