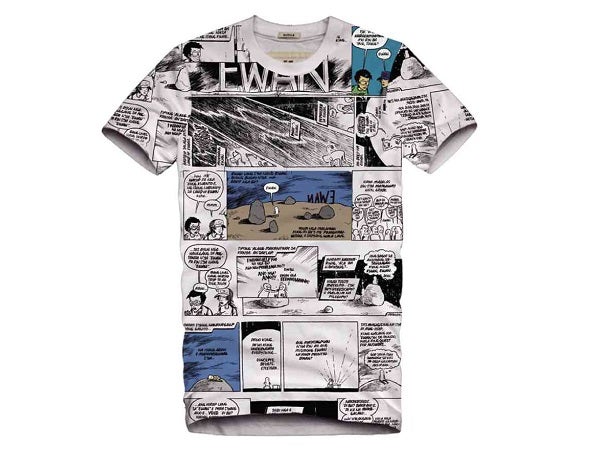 Put on some ‘komix’ today

Its creator, Manix Abrera, first came up with the strip when he was a college sophomore more than 10 years ago.

“When I started, I was drawing about what was happening around me, so it was really more about college life,” says Manix, son of Jess Abrera, the cartoonist behind “A. Lipin” and Inquirer’s Guyito. “But now, I mix in other scenarios, too, like commuting, life in the province—anything that reflects our culture.”

After countless strips that have been compiled into nine books, Manix has found yet another avenue to showcase his art—through a collaboration with fashion brand Solo.

Manix and Solo started the project a year ago, after the fashion house approached him with the idea. Manix had no problem saying yes, especially when he found out that Solo’s past featured cartoonists include Tonton Young (“Pupung”), Tony Velasquez (“Kenkoy”) and Larry Alcala (“A Slice of Life”).

“It’s very humbling that they decided to get me, too,” says Manix.

Manix developed his skill for making comic strips when he was the cartoonist of the University of the Philippines’ student publication, Philippine Collegian. He began drawing for the Inquirer the strip “Garapata Blood,” together with former band mates John Paul Cuison and Bheng Densing. Later, Manix was asked to make his own comic strip—thus the birth of “Kikomachine Komix.”

The title comes from his former band’s name, Kiko Machine. The popular “rak en rol” phrase, he says, was a common expression people used back in college.

“It was like saying, ‘Hanep!’” he says. “You can use ‘rak en rol’ in a positive or negative context.”

For his Solo collection, Manix says he let Solo’s design team choose the strips they wanted. The final designs’ looks, he says, will be a surprise to him as much as it will be to his fans.

“I’ve been very busy for the past few months with my thesis for my Master’s in Fine Arts, so I gave Solo a free hand to do what they wanted. I had one request, though—no mugs,” he says.

A meet-and-greet and book-signing event with Manix is scheduled today, 4 to 6 p.m., at The Row in Glorietta 1, Ayala Center, Makati City. Be there early enough and buy any item from Solo’s Kikomachine collection to receive a free signed copy of “Kikomachine Komix #9.”

Post your best “rak en rol” photo on Instagram and tag @inquirersuper. The five best photos will receive his and hers shirts from Solo’s Kikomachine collection and a signed book by Manix Abrera.