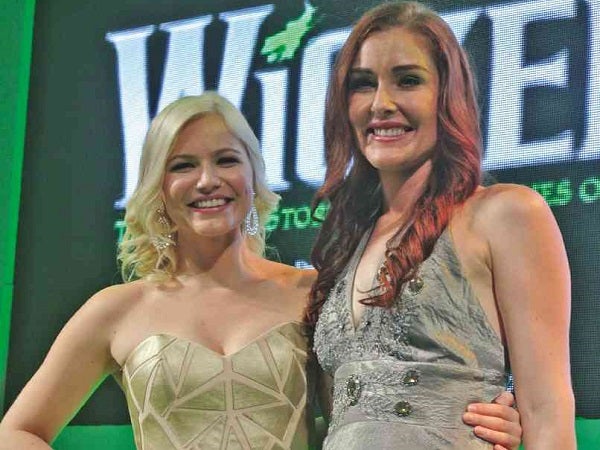 Get ready for ‘Wicked’

Manila is wickedly ready for   ‘Wicked,’” said Bambi Rivera-Verzo, executive producer of Concertus Manila, confirming the rumors that have been buzzing for months now.

The megamusical is really coming to Manila in January 2014 for a limited season.

Based on the novel by Gregory Maguire and the magical world and characters created by L. Frank Baum, “Wicked” tells the untold story of the Land of Oz, long before Dorothy showed up with her dog Toto.  It’s a tale of friendship between Elphaba and Glinda, two very different girls who eventually grow up to be the witches of Oz.

Since its debut on Broadway almost 10 years ago and in London’s West End two years after that, “Wicked” has amassed some 50 major accolades, including three Tony Awards and a Grammy. The musical holds a record for the highest-grossing week on West End and continues to be Broadway’s number one show, with 37 million audience members worldwide having fallen under its spell. Touring productions have been highly successful, too, setting records in Tokyo, Stuggart and Australia.

“It is truthfully the mother of musicals,” said James Cundall, CEO of Lunchbox Theatrical Productions, one of the companies that also brought “Cats,” “Mamma Mia!” and “The Phantom of the Opera” to Manila. 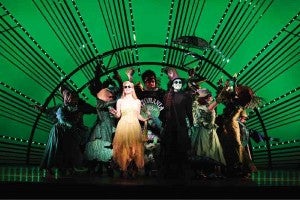 Lunchbox, Concertus, David Atkins Enterprises and 105.9 Radio High have teamed up with VISA and Smart Infinity for the herculean task of bringing the show here. Cundall said, “I thought ‘Phantom of the Opera’ was big until I started working on ‘Wicked.’”

Their biggest challenge? Transforming the Main Theater of the CCP into the Land of Oz and preparing it for “Wicked’s” 54 different scenes and locations.

Cundall said, “It’s such a complex show. We’re having to spend something like 20 million pesos just making the venue work for the show. It’s not that the venue doesn’t work, the show is just so complicated. We have a computer flying system, we have to put in new dressing rooms. It’s a lot of work.”

But it’s a show worth all the effort. The result is a fantastic production with great music, beautiful costumes and goosebump-inducing effects.

At the press launch last Wednesday, guests got a small taste of the magic of “Wicked.” A dragon stood guard outside Diamond Hotel’s ballroom, welcoming guests into an Emerald Banquet. The show’s musical director David Young played a medley of the musical’s songs on the piano, and stars Jemma Rix and Suzie Mathers, who had flown in from Australia, performed numbers from the show, including the duet “For Good.”

Mathers, who has played Glinda over 300 times in Singapore and Korea, also sang “Popular.” “Popular is such a fun song. It was actually my audition song for drama school,” she said to us in an interview after the launch.

Rix, who has played the green-skinned Elphaba 800 times in productions in Australia, Singapore and Seoul, performed the Wicked favorite “Defying Gravity,” making jaws drop with her powerful voice.

Not the first time

It wasn’t Rix’s first time in the Philippines. She was in Cebu over a week ago to watch her husband Josh compete in this year’s Iron Man. He placed eighth.

“He had a great day and I was so excited. I wish I could have stayed in between. It was a lot of fun. Cebu was beautiful. We swam with the whale sharks,” she said.

Young, Rix and Mathers are headed to Auckland for a production of “Wicked,” but they are looking forward to returning to Manila in January with the rest of the company—around 70 people total.

“A lot of my friends toured with shows that have been through the Philippines like  ‘Mamma Mia!,’ ‘Cats,’ ‘Phantom,’ etc. They have all said what a wonderful place it is and how nice the people are, especially, and how great the audiences are. Finally it’s my turn,” Young said.

For Cundall, Filipino audiences are “superb.” “You love music. You understand the story really well so you reward the cast onstage with your appreciation not just of the music but of the story. I just love coming here because of that.”

Later this year, Young will be auditioning Filipino musicians to become part of the show’s orchestra.

Added Cundall: “There are no shortcuts. There’s no difference between this show and Broadway or the West End, it’s the same set, it’s not a touring production, it’s not a little stripped-down version, this is the real big boy that’s coming. Or big girl.”

The producers also believe the show will appeal to a younger demographic. Verzo said, “We want to cover a bigger market.   ‘Phantom’ being really more for the older crowd, this time we want to bring in more of the young. This has been on our wish list for the longest time. We’re glad it’s finally happening. ‘Wicked’ is such a great production, bigger than ‘Phantom.’ We’re so excited about it.”