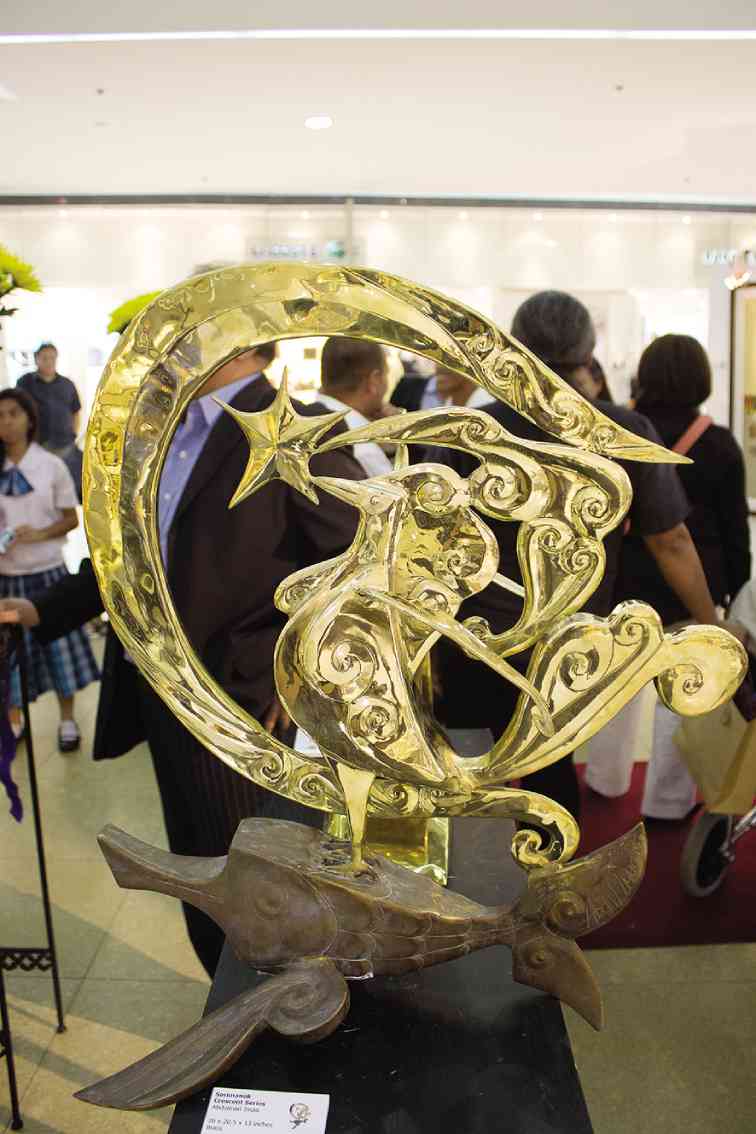 In celebration of the end of Ramadan, the Muslim feast, Muslim and Christian artists collaborated in an exhibit to showcase the beauty of Islamic art in Galerie Joaquin’s Eid’l Fitr International Arts Festival at The Podium mall Aug. 2-9.

National Artist Abdulmari Imao showcased his signature “Sarimanok” paintings and brass sculptures. His “Sarimanok” genre works can be traced back to Sulu, where he was born and raised. According to Mindanao folklore, the sarimanok is considered the messenger of the gods and is a sign of good luck.

His son Toym also does brass sculptures that are reminiscent of the elder Imao’s works; but he also makes people his subjects such as “Sulu Sea Swim” and “Kingfisher.”

Tawasil’s “The Flight of Lepa Sambalayang” is his homage to the art of tapestry. He lamented that tapestry is a dying art in Mindanao.

“Aside from trying a different medium, I also wanted to raise awareness on the [waning] appreciation of tapestry as an art form,” he said.

Meanwhile, Davao artist Kublai Millan’s works such as the “Symbiosis” and “Mosque” series depart from his the usual  human figures that he paints. Consisting of geometric explorations, the works border on the abstract.

“I just watched where my paintbrush would take me,” he said.

The only female artist in the group, Tamano expectedly depicts the empowerment of Muslim women. “Awakening” depicts a woman holding a heart in the process of growing.

A daughter of the late senator Mamintal Tamano, Jamila Tamano said her works are mainly rooted on her background, experiences, and travels around the world.

Rubio mixed his signature style of distorted portraiture of people depicted with long necks and simplistic facial expressions amid nostalgic backgrounds with the fashion and lifestyle of the Islamic people as seen in the work, “Dugong Bughaw.”

“It was through my travels at the Caraga region and my interactions with the Tiboli, Mandaya, Bilaan and Badjao that I was able to understand the Islamic way of life,” Rubio said.

Pinggol’s style of depicting people in a dreamlike state or in a tranquil mood was infused with Islamic culture as well, as seen in his “Thanksgiving” series.

“I had to do researches, interviews and immersions to grasp an idea of Islamic culture,” he said.

Benito’s “Market Scene” also combines his signature style of “stained glass” portraits in depicting the activities of Muslim people in the marketplace.

There is a decree in Islam against the artistic depiction of Allah, the prophet Muhammad and sentient beings. This led Islamic art to generally focus on calligraphy and geometric patterns.  But Tawasil said he believes that art should be separated from religion.

“Art is art; religion is religion,” he said.

“Islamic art is detailed because it has many design elements to show and Islamic art itself is intricate by nature,” he explained.

Although he divorces art from religion, Tawasil said there’s nothing original about art and that Muslim artists get their inspiration from Islam.

“We just get inspiration from the creations of Allah. There is no original, only inspiration.”

Although Toym Imao admitted that while he’s trying to come up with his own style, his father Abdulmari remains a key influence.

“As a child, I always [saw] my father design sculptures,” he explained. “My emulation of his style is my homage to him, and I wish that my children and grandchildren would carry on this art style started by my father.”