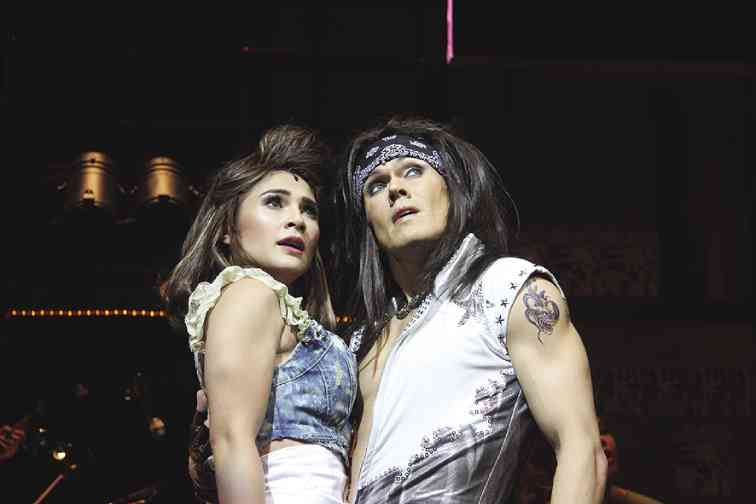 Punk has had a big resurgence this year, with spikes and studs dominating the fashion runways.

MAC Cosmetics and Atlantis Productions gave Lifestyle an exclusive backstage peek as they created the makeup looks for the restaging of “Rock of Ages.” (It ended its run last month.)

This was Atlantis’ second staging of the hit musical, and its second time to collaborate with MAC on “Rock of Ages.” The two have worked on other productions, including “Nine,” “Piaf,”

“God of Carnage,” and the upcoming “Carrie” and “The Addams Family.”

“Our expertise lies in our products that cater to a wide range of looks with spot-on shades and formulations, which include a line of PRO products that are apt for stage makeup,” MAC’s Cindy Go said of their relationship with Atlantis.

“Aside from this, we also have a professional roster of artists and affiliates who are well-skilled in any makeup application.”

On our visit, Ayesa greeted us from the makeup chair, Kohl makeup being applied around his eyes. A table on the opposite side of the room had a row of rock-star wigs for the show’s characters.

When Morales walked into the room, De Leon pointed out that the actress’ makeup was dominated by pinks and mauves, to underscore her innocent, small-town girl persona dreaming of hitting the big time in the big city.

The look was pegged after the “Jem and the Holograms” cartoon from the mid-1980s. The female ensemble was a riotous Aqua Net mix of ’80s pop-star-inspired looks: Madonna, Cyndi Lauper, Boy George.

The other male leads, Drew, Lonny (Jett Pangan) and Dennis (Jamie Wilson), wore more subdued rocker makeup, “as men of that era were short of being shy to wear black eyeliner on their lower lash line, with a little smudged effect while performing,” De Leon noted.

throughout the play,” he told us.

One of MAC’s key looks for Fall 2013 could have well been inspired by Stacee Jaxx and crew. MAC’s “Reb-Elle” look points to strong, black eye makeup with flawless, natural complexion.