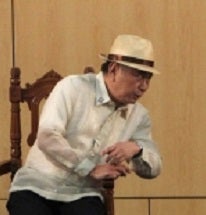 Alvarez to sue Almario for libel

MANILA, Philippines—She had considered responding to his attacks “with dignified silence.”

Alvarez said she would file libel charges against Almario, who she said has been “feasting” on the four artists who were stripped of their National Artist titles by the Supreme Court, with “special focus” on her and comic strip creator and filmmaker Carlo J. Caparas.

Alvarez, wife of former Sen. Heherson Alvarez, has assailed the “personal attacks” allegedly hurled against her by Almario, saying they have “become out of sync and clearly, a blatant case of oral defamation.”

“He has continuously assaulted my character and integrity of lifelong service in the field of culture and arts in our country,” Alvarez, who founded the Philippine Educational Theater Association in 1967, told the Inquirer.

“Mr. Caparas, at least, was gentleman enough to defend me on air from the verbal abuse made by Mr. Almario,” she said.

Alvarez said it was “unbecoming and unethical” for Almario, a National Artist and a government official “to have maliciously and deliberately undertaken this mudslinging campaign against me.”

Sought for comment, Almario said he has no questions about the qualifications of the four artists. “I never called them pipitsugin (tacky),” he said.

His objection against their conferment was what he called abuse of presidential discretion when Arroyo allegedly disregarded the awards’ rigorous screening process and inserted her own choice of awardees.

Almario said he called Alvarez “immoral” for not refusing her selection for reasons of delicadeza (sense of propriety).

Alvarez said she had wanted to shrug off the matter but she received so many adverse comments.

“I received so many phone calls, text messages and e-mails from people who were shocked when he called me ‘immoral’ on Karen Davila’s show on ANC. I myself couldn’t believe it so I waited for the show’s rerun. I saw it and was flabbergasted. I was being accused unjustly and falsely by Mr. Almario,” Alvarez said.

“I am being realistic that my time on earth is getting close to a curtain call. I have survived cancer but my well-being is being threatened by diabetes and high blood pressure. I am also half blind. I am resigned to meet my Maker sometime, sooner or later. But I cannot allow my name to be defiled by somebody who is known during the dark years of the dictatorship as a most favored artist of Madam Imelda Marcos. And strangely, his proclamation as National Artist was signed by President GMA,” she said.

On July 16, the Supreme Court said Alvarez, Caparas, Mañosa and Moreno can still be conferred the National Artist award for as long as their nomination undergo stringent processes.

In a decision, the high court clarified that the invalidation of Arroyo’s declaration that recognized the four as National Artists “should not be taken as a pronouncement on whether they are worthy to be conferred that honor.”

“Only the President, upon the advice of the NCCA and Cultural Center of the Philippines (CCP) boards, can do that,” it said.

The tribunal said the former president had disregarded the processes established by the NCCA and CCP, diminishing the award’s exclusivity.