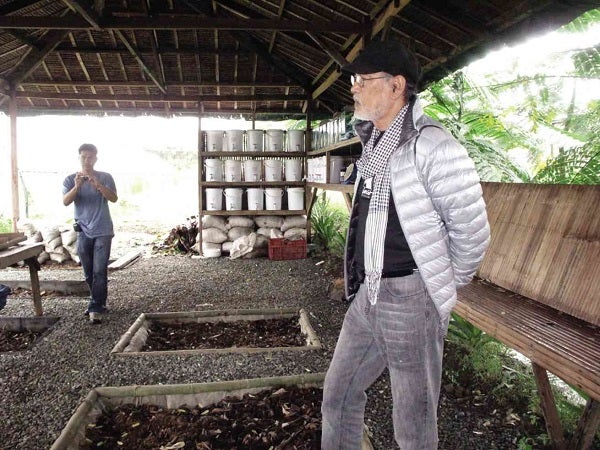 BENCAB at the compost area

BenCab and team brave ‘Maring’ to do culture trip

At the height of tropical storm “Maring,” National Artist BenCab and his staffers surged through the chaotic metropolis for their annual culture trip to Rizal, Cavite and Laguna.

“We were persistent. We decided to get through it,” said BenCab.

They attempted to go to Cavite through SLEX and Coastal Road but had to turn back. Taking Daang Hari, they made it to Gourmet Café in Silang, Cavite, by 1 p.m.

They enjoyed a hearty buffet at The Dining Room, the new Mediterranean-inspired structure famous for the “bottomless salad bowl.”

Over pasta, chicken, fish and Gourmet Farms’ signature coffee, BenCab and his partner Annie Sarthou explained that it is their annual routine, during off-season, to take the staff of BenCab Museum and Café Sabel on an exposure trip.

At Gourmet Café, they toured the compost area where the organic fertilizers are processed. Then they visited the factory where the coffee beans are roasted. BenCab said his cafe used to roast manually its coffee beans, only to get uneven results. When his cafe beans were roasted at Gourmet Farms, the coffee was heavenly.

The last stop was the country store, known for its bottled sauces, dressings, teas, salads, vegetable chips and bakery products.

BenCab’s farm off Baguio grows lettuce, herbs, carrots, string beans, basil, spinach and coffee. He’s proud of the Benguet Arabica, considered by experts as one of the best in the world.

The Laguna tour included a visit to Rizal Shrine in Calamba, the woodcarvers in Paete, the studios of artists Manuel Baldemor, Danny Dalena in Pakil, Laguna.

They also went to Nemiranda’s studio in Angono and to the cave of petrogligphs.

This was the group’s third trip since the BenCab Museum opened in 2009.

The group has gone to major museums in Metro Manila. Last year, it toured Ilocos Norte and Ilocos Sur, from Pagudpud to Vigan.

BenCab’s staffers come from Ifugao, Bontoc, Kalinga and Ilocos. Owing to their hard work and dedication, the BenCab Museum has been attracting visitors while Café Sabel enjoys a good clientele.

For instance, the long weekend of Aug. 10 posted a record of 743 visitors. Even at the onset of Maring, some 200 came to the exhibit opening.

BenCab lauded the hard work of his staff. His scholar, Nina Tandoc, now works for him. Ryan Valiente of Ifugao and Tanley Bahala started out as construction workers and now do multitasks at the Musuem.

BenCab said the trips expose the staffers to various local cultures and deepen their knowledge of Philippine culture in general. This comes to good use when they receive visitors to the BenCab Museum

Aren’t these people lucky to be rewarded an annual trip around the country?