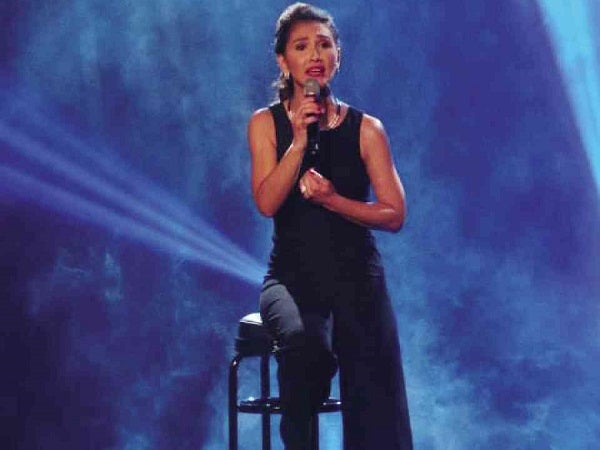 Menchu the Magnificent in one stellar concert

The big revelation during Menchu Lauchengco-Yulo’s concert at the CCP Little Theater last Aug. 15 was that she is actually a woman of three faces.

The first is the face she wears in public—the fair-skinned, ageless mestiza beauty that must have, a long time ago, bathed in the fountain of youth. At 50, she could readily pass for someone a decade younger, even more.

Easy to see how she convincingly made a name for herself as the go-to ingénue of musical theater at the start of her career—a time, she said, when most of her roles required singing, dancing, and acting with a shawl, which she hilariously demonstrated in a medley that included “I Feel Pretty” from “West Side Story” and “Sixteen Going on Seventeen” from “The Sound of Music.”

But, as one who has met her a few times can attest, Lauchengco-Yulo is no naïve, wide-eyed maiden; this woman is a bundle of energy.

To see her deliver her opening monologue (“I love the theater!”) in a manner so careful and composed, as if not a single word from Luna Griño-Inocian’s script was to be skipped, was quite the curious sight then. She would grow more relaxed, adopt a more laidback stance, as the evening wore on, but that she clearly sounded rehearsed during the spoken parts could not be denied.

So what? This was, after all, only her first solo concert in her 35 year-long career.

That’s 35 years’ worth of acting credentials, which leads us to her second face: Menchu the performer, molded by nearly four decades under the beam of the spotlight.

“It came to a point when I realized I could not spend the rest of my life playing these ingénues,” she said. Too pretty, too white, lacking in experience—the opposition she initially encountered upon raising her interest to play the heavier, dramatic parts could not have been more inane. But she prevailed, obviously, paving the way for what she called the “plum roles.”

In back-to-back renditions of “I Dreamed a Dream” from “Les Miserables” and “Don’t Cry for Me Argentina” from “Evita,” she adroitly illustrated her capabilities as a singing actress—the former sung with full-throated despair, the latter with an oratorical flair in tune with the song’s speech-like structure, producing the first of many spine-chillingly transcendent moments of the night.

Her ability to weave feeling into lyric made for a transporting experience, as if the packed audience were really watching her, for the first time, play Fantine in Repertory Philippines’ landmark production of “Les Mis” back in ’93, and two years later, Andrew Lloyd Webber’s Eva Peron.

She would follow those up with “As Long As He Needs Me” from “Oliver!”—the anguish of undying love turned palpably real—and Jason Robert Brown’s “Stars and the Moon,” an exceptional showcase of storytelling through song.

This was Menchu Lauchengco-Yulo of the stage—that seemingly ethereal figure who, with one hand, refashions with her personal stylings the wickedly comical Mrs. Lovett in Stephen Sondheim’s “Sweeney Todd” (Rep, 2009), and with another, bravely dives head first into the deepest emotional trenches of Diana Goodman in “Next to Normal” (Atlantis Productions, 2011).

It’s hard to believe that, back in 1977, she actually flunked her first audition (for Rep’s “The King and I”).

“I didn’t even know what to do in an audition!” she said, relating one of the few anecdotes scattered throughout the hour-and-a-half concert directed by her brother, the balladeer Raymond Lauchengco (whose career, Menchu wittily claimed, is her doing—“I wrote his name down during the audition … and he got the part!”).

But it’s harder to imagine what would have happened had she not persevered and returned the next year, and won her first role (in 1978’s “Fiddler on the Roof”). That local theater would have left undiscovered the third face of Lauchengco-Yulo is a certainty.

One moment, she’s expertly scaling the treacherous, near-operatic notes of “Green Finch and Linnet Bird” from “Sweeney Todd”; the next, she’s powerfully belting out with masterful support “Meadowlark” from “The Baker’s Wife” (a number that could arguably stand on its own that night in sheer richness of musicality).

Off the books, here is the most accomplished and versatile singing voice in Philippine theater today.

And one, it should be noted, that comes with exceptionally perfect diction. This we witnessed when she took on “Not Getting Married Today” from Sondheim’s “Company.” The song, written as the ramblings of a bride getting cold feet on her wedding day, requires rapid-fire delivery, and Lauchengco-Yulo was more than up to task, every syllable rolling off her tongue with refreshing intelligibility.

Anyone who can successfully pull off a Sondheim song—sing the tricky melodies on pitch, tackle the notoriously tongue-twisting verses, fully dissect and flesh out the truths layered within the lyrics, and convey a plethora of emotions to the listener—deserves to be held in high esteem.

That she pulled off eight of his songs, from roles she has played (“Loving You” from “Passion,” “The Ladies Who Lunch” from “Company”) to ones that she’s bound to and should play in the near-future (“Everything’s Coming Up Roses” from “Gypsy,” “Send in the Clowns” from “A Little Night Music”), certainly spoke something of her caliber as a musical theater actress.

Coincidentally (or not), she also unexpectedly performed a number from the gargantuan money-making machine called “Wicked,” a day after the musical’s touring production had its press conference. It runs at the CCP Main Theater starting January next year.

“Elphaba is a role that I would like to play someday. But I realized age is not a factor—because she is painted green!” And off she went belting “The Wizard and I” to the audience’s delight.

Maybe on her second concert (which, we demand, must happen), she can do “Defying Gravity.” No need for special effects, though, for on that stark stage, with only her exceedingly talented musical director and pianist Rony Fortich for company, the woman could make just about every song her own.

If anything, this evening, aptly titled “Leading Lady,” proved that when we speak of Menchu Lauchengco-Yulo, we may well be referring to three distinct personas, but when we speak of the First Lady of Philippine Musical Theater, as audiences have come to call her nowadays, there can be no other.