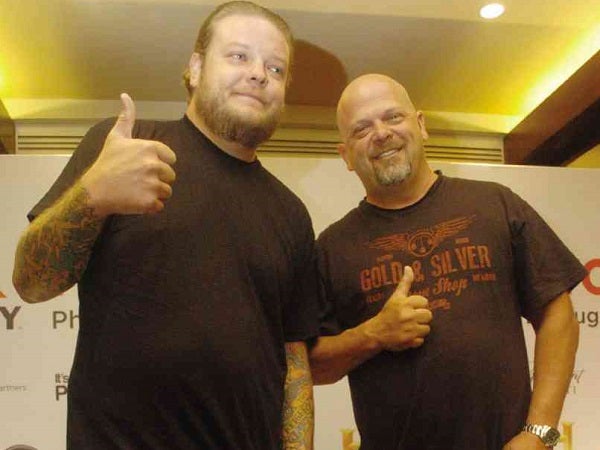 It’s hard to believe that the two bulky bruisers seated in front of us could probably tell, at a glance, the value of the jewelry we were wearing. But longtime fans of the reality show “Pawn Stars” would surely know what we’re talking about. After all, it’s Rick Harrison and son Corey’s job to know how much things are worth; it’s what makes them profitable and famous.

Rick and Corey, two of the lead cast members of “Pawn Stars,” recently visited Manila as part of their Asian tour. Super had a chat with them—in between their meet-and-greet with fans and hunting for Philippine antiques—about creepy pawns, getting duped, and why their job as America’s most popular pawnbrokers have forced them into hiding.

How did you develop an eye for spotting valuables?

Corey Harrison: With me it was easy—I had the best two teachers in the whole world.

RH: I’ve been doing this since I was a kid and for some reason I was just really good at it.

Have you ever fallen for a fake?

CH: The key to the business is to not make the same mistakes twice.

What has been your most memorable find?

RH: The coolest thing we ever bought, actually he (Corey) bought it a few months ago, was Johnny Cash’s driver’s license. We both really liked it; we hung it on the wall and put a $100,000 price tag on it, so no one would buy it (laughs). If someone’s willing to buy it for that (amount), we’ll sell it.

Does it happen often that you get attached to something you don’t want to sell?

RH: It happens more often than not, that both of us want it, so we end up arguing about it.

When does this usually happen?

You still have to pay for the stuff you want?

RH: That’s a rule around there. We just can’t take something, otherwise we’d be taking stuff all the time. So, the rule is you have to buy it from the shop.

Have you turned away an item because it didn’t feel right?

RH: There’s been plenty of things people have brought in that I thought were really creepy. If it’s got bad mojo, I don’t take it.

RH: Someone came in with a gas mask for a baby during World War II. It was just way too creepy … A lot of things that people bring in and say, “This came from a murderer, it’s really cool.” I don’t like that stuff.

Which items should people keep because its value will appreciate? Which items are recession-proof?

CH: If you find them, let me know, I’ll stop working immediately.

RH: Some things are better than others. Autographs of people that are still living, there’s a big problem there, because they keep making more and more of them which makes it of lesser value. Really iconic people who have already passed, their stuff is always good. Or where there’s a solid market for things, like in Japan, we were just there, we were talking about Zippo lighters and they’ve been going crazy over Zippo lighters for 30 to 40 years.  Artists that are known, who are no longer with us. When you buy art from a new artist, it’s really like gambling. Coins are always good, there will always be coin collectors.

Which celebrities are most in demand? Whose memorabilia are hot stuff?

CH: Babe Ruth autographs are always going to be worth something.

What stuff of his would turn up?

RH: Someone actually came in with the jacket Arnold wore in “Terminator.” At one point, it would’ve been worth a lot of money, but with recent things about him, people don’t like him as much, so it’s brought the price of the stuff down.

How much would his jacket have been?

CH: A quarter of a million dollars. Now who knows how much it would be, because no one likes him as much anymore.

Any celebrity memorabilia you’d wanna keep for yourselves?

RH: Johnny Cash’s driver’s license (laughs). I really like old movies, so I do have a lot of Charlie Chaplin stuff.

How’s the recovery rate been in your shop?

RH: We’re a lot different now because we’ve gotten famous. In our shop, over 90 percent of the people pick their stuff up. When the economy got really bad, it was 50 percent.

What would you pawn?

CH: If I needed to get rid of something? My old man.

How has the show affected your business?

RH: Business is great. We get 5,000 people a day in the pawn shop now. Instead of people going to the pawn counter and looking at things, they walk into the back room and have us check it out. We both have to run it remotely now.

Do you always have people coming up to you to have things appraised?

RH: Oh yeah. I’m getting so tired of people coming up to me and saying, “How much will you give me for it?”

CH: I tell them, “It’s six dollars.” I actually had to move because of it. It wasn’t a bad neighborhood, it was a middle-class neighborhood, but when we started filming the show, all of a sudden I had people knocking on my door trying to sell me chainsaws. I packed up and got out of there pretty quick. I kinda keep it hidden that I live in my new place.

You’re going antiques shopping here. What do you hope to find?

RH: That’s the great part about my job, you never know what you’re gonna get.