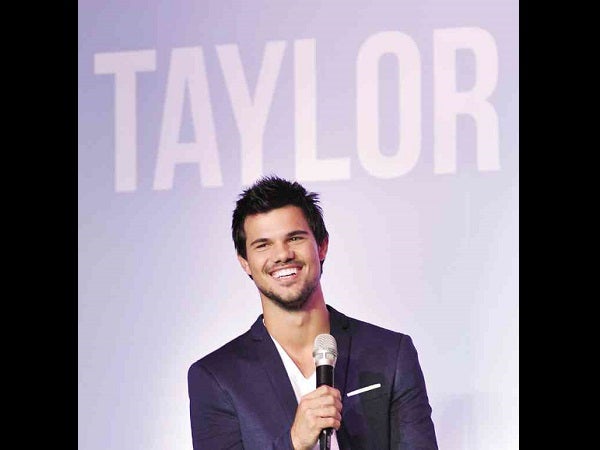 FROM WEREWOLF to “Benchsetter.” Taylor Lautner in Manila for Bench. PHOTO BY JILL LEJANO

We had always been Team Jacob. And when we walked into Makati Shangri-La’s Pasay A function room, we knew we made the right choice.

Taylor Lautner was waiting, clad in a Bench sweater and Bench jeans. The actor was in the country for a number of appearances for Bench, including a Fun Meet at the Mall of Asia Arena and mall shows at SM Mall of Asia and Glorietta where Filipino fans had a chance to see him in the flesh.

Taylor shot to fame after landing the role of Jacob Black in “The Twilight Saga” movie series based on the books by Stephenie Meyer. The fourth and final film, “Breaking Dawn Part 2,” hit cinemas late last year but fans continue to pledge their undying love for the boy who played the werewolf.

He says he misses playing Jacob Black, but he’s also ready to move on to other projects, including the film “Tracers” which wrapped up a few weeks ago. “I’m really excited about it. It was a great experience, different from anything I’ve ever done before,” he says. In “Tracers,” he plays a New York City bike messenger wanted by the Mafia.

Super spent 10 minutes with Taylor who talked about his Bench endorsement, why he’s scared of neon, and why people keep asking him to take his shirt off.

Why did you say yes to Bench?

As soon as I found out about it, I went to its website and looked at all the clothes and I loved them. And then, as soon as I tried them on, they were super comfortable and that’s really the most important thing to me. I’m very simple—jeans and T-shirt, boots, just simple stuff, you know. I’ve got to be comfortable or I don’t want to wear it.

We saw the video of the shoot and it was pretty active—you were running around. What do you remember from that day?

It was awesome. Oh man, I remember everything. Anthony Mandler is the photographer and he was amazing. We were in this really, really cool, dark, gritty warehouse and there were different things all over the place—ropes, and all these different things. We did some cool stuff. The clothes, because they’re so comfortable … I didn’t feel constricted. And the video turned out great.

Do you have any favorite pieces from the shoot?

Yeah, there’s a similar pair of jeans, a similar color to this, but they were more jeans instead of whatever this is. And probably the simple V-neck T-shirts that they have.

Do you enjoy choosing your own clothes, or do you like having a stylist?

I enjoy choosing my own, but it’s nice every now and then to get a little help, or you never know what I’ll throw on. But I mean, I kind of have, like, who I am now, I really feel like I can only say that in the past two years. Before, I was wearing different things all the time, some of it worked, some of it didn’t. Sometimes I wore stuff out of the house and people would say, “Please never wear that again.” Now I feel like I know myself a little more, and I can run with it myself more now.

I tend to like my solid colors more. I tend to stick with blacks, grays, darker blues. So I don’t think I would go super super bright, like neon. That would scare me.

Did you know how big your fan base is in the Philippines before coming here?

I actually didn’t. I was so surprised at the reception at the airport. We landed at 3:45 a.m. and I didn’t think anybody would be there, it was in the middle of the night. And we walked outside and there were hundreds of fans which was extremely amazing, a great welcome to the Philippines.

When did you realize you wanted to be an actor?

But martial arts was a huge part of your life. Is that something you still get to enjoy?

Yes, it is something I still get to enjoy and I do it for fun all the time. Unfortunately, I don’t have time to practice it hardcore. When I was competing, I would practice four, five hours a day, five or six days a week. I don’t have that kind of time anymore, but for fun I will randomly do my karate whenever, wherever.

How has life been after “Twilight” madness?

It’s been very different than before “Twilight” (laughs). It’s been a blessing. If you asked me five or six years ago if I thought I would be sitting here today, I would think you’re crazy. Absolutely not. It’s been awesome. I’ve been able to travel a ton, meet and work with so many people. I’m doing what I love to do which is an honor.

Do you miss playing Jacob Black?

I definitely do. I think I always will. As an actor, you wanna do different things, but still that role will mean so much to me for the rest of my life. I fell in love with Jacob. I miss the filming experiences. We had such a blast actually making the movies and spending time together. We’re very good friends. I miss Jacob for sure, he’s a good dude.

You were shirtless for huge chunks of the films.

And we see people constantly asking you to take your shirt off on TV shows. Is that something you ever get tired of?

(Chuckles) Yeah, yeah. It’s understand … I mean, people think it’s funny. Jacob took his shirt off way, way too much and half the time it didn’t even make sense why he was taking his shirt off. Probably more than half the time. But you know, it’s fine, it comes with the territory. You play a character like that, you’re going to get asked to do it.

Jacob was an unforgettable role, but what dream roles do you have? Are there dream projects you want to work on?

I have dream directors that I want to work with. I certainly have dream actors I want to work with. I’ve always looked up to Tom Cruise and Brad Pitt. I just love how diverse their careers have been. Tom started when he was younger than me right now and he’s still going hard at it today. And he’s never done the same thing over and over again. You just look at the diversity in his career and how much he’s challenged himself. I really respect that. I would love to be able to do that.

Tell us about “Tracers.”

I read the script, it’s a very intriguing story. I don’t think the world of parkour has been explored much. I really love the characters in the story and their relationships amongst each other and the journey that my character, Cam, goes through. It’s darker and grittier than anything I’ve  done before. It was challenging as an actor, which is why I really wanted to do it.

Did you enjoy doing your own stunts?

I did. There was a lot of awesome stunts that I was able to do myself and, yeah, I remember when I first met with the director, he said, “I want this movie to feel as real and authentic as possible and there’s no better way for it to feel that way than to see you actually doing everything. When it’s not you doing it, you have to cut away and see some figure from far away and just see the back of them.” People are smart. They know. It feels less authentic like that.

How has fame changed your life?

Man, that’s tough to sum up. It certainly has, in one way; fame has allowed me to work and do what I love to do—make movies and act. In another way, in my personal life, it’s different. You have somewhat a loss of privacy sometimes. There’s a lot of fans which is amazing. I don’t know, maybe some people have bad, annoying fans, but mine sure are not. The fans that I encounter are so gracious, especially the ones last night, I’m excited to be here and meet them.

How do you stay grounded?

I think there’s several different ways, but the most important for me is that my time spent when I’m not working is still with my family, my close friends. They’re the same people who were close to me before any of this happened. I didn’t all of a sudden make these movies and became famous and changed who I hang out with. I do have new friends, but my inner core of friends and family is the same as it was five or six years ago.

You really try not to. And I certainly do it much less now than I did in the past, because it’s a very frustrating thing, so, very rarely now …

There’s been a few crazy things, but I still am blown away by the fans—and several of them do it, but I remember one specifically who tattoo either your face on her body or I signed a girl’s arm once. It was in the midst of a mob scene and she wanted me to sign her arm, so I did it quick and the next day a friend forwarded me an e-mail of her arm and she had the signature tattooed. I was like, wow, that’s commitment. That got my attention for sure.