For people outside the academe, literary and art criticism is not only unfamiliar, but also difficult to read, let alone understand. This stems from the notion that all critical essays on fiction, poetry and other forms of art are barely comprehensible, due to the opacity and density of the language of criticism.

For some book lovers, there is no need to read criticism, because it is a secondhand experience. Besides, if there is no text, what is there to critique? Criticism, after all, feeds on creative works.

As the critic Terry Eagleton puts it in “How to Read a Poem”: “Like thatching or clog dancing, literary criticism seems to be something of a dying art.”

Literary criticism, other than being perceived as a kind of death by boredom and fruitless toil for nonacademics is, indeed, dying, because it is still quite unrecognized, especially in our country.

But during the latest J. Elizalde Navarro National Workshop on Arts Criticism, organized by The Varsitarian of the University of Santo Tomas, top Filipino critic Oscar Campomanes said “critics must persist,” especially in this era when the young play computer games and hardly read books at all.

Amid the countless struggles many Filipino critic-writers face to get published, Ralph Semino Galán—associate professor of literature, creative writing and the humanities in the Faculty of Arts and Letters and the Graduate School of the University of Santo Tomas, as well as co-convener of the annual UST JEN workshop—perseveres and prevails in the rarefied field of criticism.

Although better known to many as a creative writer than a literary critic, Galán is able to produce a collection of literary essays, cultural critiques and book reviews, simply and aptly titled “Discernments” (UST Publishing House, 2013). The fact that Galán’s luminous collection is in itself a hybrid of both critical (because it reviews and analyzes literary and cultural texts) and creative (because the volume quite obviously uses poetic language and other aesthetic devices to communicate a point) is what makes the book distinctive and unique. 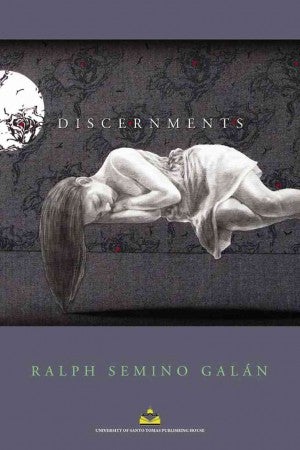 What makes Galán’s “Discernments” a major contribution to the landscape of Philippine literature, in both its literary and critical spheres, is its ability to cater to literary scholars and creative writers alike.

Throughout the volume, Galán manages rather skillfully to fuse his critical and creative voice, thereby creating an entirely new lexicon with which to approach the often arcane and jargon-laden discipline of critical writing.

In just a hundred pages, “Discernments” covers topics in various fields while undertaking the analysis of chosen literary texts (e.g. the fusion of heart and mind in the poems of National Artist for Literature Edith L. Tiempo, the fifth poetry collection of UST doyenne Ophelia A. Dimalanta, the feminist nomenclature in Isabel Allende’s first three novels, among others). While effectively articulating the relevant points in his discourse, Galán is able to provide dulce et utile (delight and instruction) to his readers.

Other than his brilliant and beautifully descriptive analyses on the works of Tiempo, Dimalanta and Allende, Galán also introduces us to Baguio from the perspective of a critic looking through the lens of non-Baguio poets, like Nerisa del Carmen Guevara, Angelo V. Suarez, J. Wendell P. Capili, Isabelita Orlina Reyes and other equally illustrious bards. Galán presents to us the “poetic landscape” of Baguio and describes the summer capital’s “picturesque landscape” both as a physical and psychical place and space, as it is imaged and imagined in the poetry of wordsmiths who appreciate its beauty, mystery, and mysticism.

Another interesting essay is his analysis of Ballet Philippines’ Shoes++, in which the dance performance, according to Galán, presents “an indexical sign of how the shopping malls, cold monuments of urban mercantilism, have deeply penetrated the collective consciousness of creative artists and laymen alike.”

The dance is also read as an “allegory of an ailing nation like the Philippines,” where the unequal distribution of resources has led to the sharp divide between “the well-heeled upper classes and the slippered masses.”

Readers may find this essay a delight to read, because of the way Galán is able to translate the dance steps into words poetically: “All of them of course are flippantly flipping and flapping their flippers… like dolphins and penguins…”; “Gesticulating arms and gyrating hips… the dancers express their various longings through their bodily gestures…”; “Filipino dances associated with agricultural rituals as the ballerinas and danseurs… simulate planting and harvesting movements”; and many more. It seems like, to be a ballet critic, one should be able to dance along with the dancers albeit in writing.

The book can serve as a beacon of light and hope for creative writers who are acquainting themselves with critical essays for the first time.

One can describe it as light for two reasons: first, because of the lightness it gives to the otherwise heavy discipline of critical writing; second, for its illuminating quality. The book is illuminative not only because of the information one gleans from reading the essays, but also in its ability to instruct the creative writer through example on both how to discern as a reader of literature and how to express those discernments through the creative exposition of theoretical ideas through writing.

Further, and perhaps of greater importance, one can also describe it as a beacon of hope because alongside its instructive function, the book also sets forth to establish a unique brand of creative criticism, and by extension paving a pathway for creative writers to tread, if or when they decide to broaden their horizons and venture into the writing of criticism and theory.