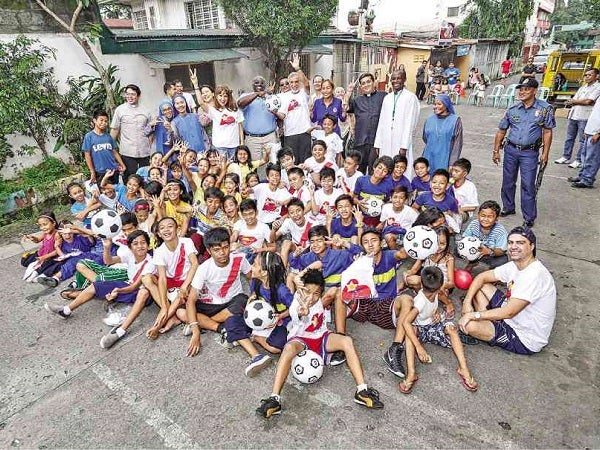 It’s a nice cool morning when I arrive in Barangay 138 in Caloocan City. Nothing really seems out of the ordinary, except for the fact that the street is blocked on both ends to make way for kids playing street football.

That, and probably also because our host, who is waving us over, is none other than Chilean Ambassador Roberto Mayorga, accompanied by his wife Paulina.

The athletic ambassador, known to us more for his skillful tennis play, was once a football player himself.

This Saturday activity is part of an outreach he initiated with his wife not only to help popularize the sport, but also to help kids lead a healthy and active lifestyle.

The beneficiaries are kids from the San Pedro Calungsod School through Fr. Luis Zapata, a fellow Chilean, and Fr. James Ty.

“As guests of the Philippines, it is our duty to do our part to help the environment and people around us in any way we can,” says Mayorga.

Football—or soccer, to differentiate it from the American-style game that involves pads and a lot of hitting—is not a new sport in the Philippines. At one point, the Philippines was one of the top teams in Asia. We’ve even had players competing at the highest levels in Europe.

Have you ever heard of Paulino Alcantara? If you haven’t, don’t feel bad, as I had to do my own research—he was a famous football player of Filipino descent in the early 20th century. Born to a Spanish military officer and an Ilongga mother, he played for the Philippines, Spain and the famous FC Barcelona.

Today, the sport has taken a back seat to basketball. Fortunately, with the success of the national football team, the Azkals, the sport is enjoying a resurgence.

The ambassador says he applauds the resurgence of the sport, but feels that for it to continue, efforts must be made to reach out. He is hoping that Filipinos will take to street football the way they have to basketball.

“Like the way we do it back home, football starts in the streets,” says Mayorga. “Brazil’s Pele, Argentina’s Maradona, and our very own Marcelo Salas all started that way.”

He says this grassroots approach is tried and tested around the world. He hopes others in the Philippines can follow this lead.

According to Mayorga, other ambassadors he knows have expressed interest in joining his advocacy.

“Hopefully, we can have a mini-league, or even a World Cup, if we can get enough teams,” he says.

Joining him that day are US Ambassador Harry Thomas and his fiancé Mithi Aquino.  The burly US ambassador, who seems to have lost some weight, shares his thoughts on soccer and the positive effect it has on kids.

The event is actually a homecoming for Ms Aquino, as she hails from Caloocan City.  After the game, both couples provide the kids with refreshments, new T-shirts and soccer balls.