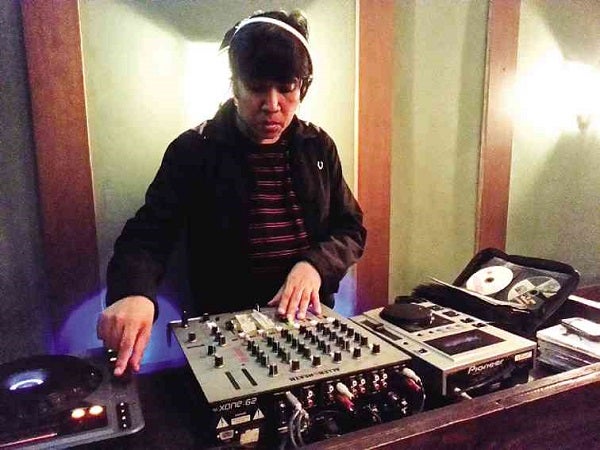 What’s a club without a DJ? These days, it’s imperative that a nightspot hire not just one but several music jocks to play the records that would make people stay, drink and have a good time.

For the past few weeks we’ve been club-hopping to find out which DJs are helping keep nightlife in the metro alive and grooving.

On a Monday night, URBN Bar & Kitchen (3/F, Fort Pointe II Bldg., 28th St. BGC, site of the former Pier One) is filled with a young crowd, mostly women in groups. They talk close into each other’s ears because the music’s volume is turned way up.

But URBN has good acoustics that allow loud music to be enjoyed. The DJ, Marc Marasigan, is playing Daft Punk’s “Get Lucky”—a song that celebrates the sound of old-school disco. We feel energized and so do the rest of the party people, especially after Bruno Mars’ “Treasure” segues.

Marasigan adds excitement to the music by doing spiels on the mic, urging the crowd to let loose and dance. We give in and surrender, as everyone shouts his approval.

Another happening place in BGC is The Hyve (8/F, W Global Center, 9th Ave. corner 30th St.). At 10 p.m. the club looks deserted; we are told that people come in at midnight.

There is a special event on the Saturday we visit, featuring a foreign DJ with a vodka brand as sponsor. The waiter persuades us to order two vodka bottles for P8,000—which is a big discount from the original price of P11,000.

But we are only two at the table and we’ve stopped drinking vodka since high school, so we settle for good old San Mig light beer as a Filipino DJ, Mike Bolante, warms us up with disco hits including Patrice Rushen’s “Forget Me Nots.”

As people trickle in, we notice the mesmerizing effect of the lights on the ceiling. It’s not the typical blinding lasers, but cool blue hues that add to the cosmopolitan chic that The Hyve projects.

We can’t wait for midnight because Aruba (Metrowalk, Pasig) beckons. Known for its nightly live bands especially Milan (who performs every Wednesday), this club also boasts some of the best DJs in the Ortigas area.

On Saturdays there are two alternating jocks who play the music—Ronald Fisher and Bad Boy. Fischer finishes his set by midnight, so we listen to Bad Boy. “He’s the No. 2 DJ in the country,” Aruba operations manager Jokz Aquino tells us.

We didn’t bother asking Jokz to elaborate, because Bad Boy goes on and stuns us with an invigorating succession of remixed tunes that are likewise projected onscreen as music videos.

The songs pulsate with a dance-funk flavor—“Moves Like Jagger,” “Get Lucky,” “Pumped Up Kicks”—nudging us to sway on our seat while sipping red wine.

and says, “This guy rocks.” We nod in agreement.

On a Thursday night we try out a new club called Cova in Jupiter, Makati City. It has impressive interiors, designed like a cave (as its Spanish name suggests), says its young owners.

That means Cova also features ’80s stuff—“Don’t Stop Believing,” “Bizarre Love Triangle,” “Pump Up the Volume,” “Electric Dreams,” “Miss Me Blind”—even as contemporary songs like “Starships,” “Treasure” and again, the ubiquitous “Get Lucky” get into the mix.

We notice that the crowd, composed of couples and groups of friends, are not dancing. But they don’t look bored either. Cova is rather small and doesn’t really have a dance floor, but then who says nobody can shake his hips without leaving the table?

The only drawback is that the club’s kitchen closes at midnight. So how will the waiters deal with customers who come in wanting to have pica-pica to go with their drinks?

But there are clubs that are not necessarily for the dancing crowd, but nonetheless boast DJs who can get patrons raving about the music. We’re talking about Borough (Unit 107-A, G/L, The Podium, ADB Ave., Ortigas Center), a New York-style restaurant open 24/7.

On Tuesdays, Edgar “Par” Sallan plays records that classic rock, punk, New Wave, alternative, hip-hop and contemporary music fans would love to hear. The thing about Par is that he knows trivia and other details that went into the recording of the songs, which makes him an ideal DJ.

On a Wednesday night we are back at Aruba because we wanted to catch Milan perform. As usual he works up the crowd to a frenzy, but we are glad as well to find Jon Tupaz manning the DJ’s booth after Milan winds up his set.

When Tupaz plays George Benson’s “Love Times Love,” we are reminded of the durable artist’s coming gig with Patti Austin on Sept. 5 at Smart Araneta Coliseum.

We’ve been saving up for that show because Benson gave us a good time when he last performed at the same venue with Al Jarreau in 2008.