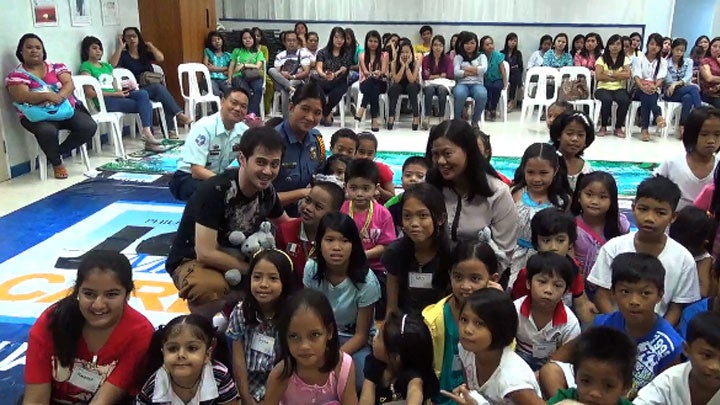 MANILA, Philippines—Instilling the idea to children that not all heroes wear capes and die for the country’s sake was the highlight of the Inquirer Read-Along session marking National Heroes’ Day.

It was the first time Philippine Air Force intelligence officer Master Sergeant Alberto Pesebre, who recently won the 2013 Outstanding Soldier award by the Metrobank Foundation, to read a story before an enthusiastic bunch of kids on Saturday.

“I was saddened when we asked the kids who the heroes were, all of them quickly answered ‘Wolverine,’ and other movie heroes,” admitted Pesebre.

He read a story to around 70 children from St. Anthony of Makati Montessori School, Makati Sporting Association and Virlanie Foundation about a local hero who risked his life to rescue people during the onslaught of “Sendong” storm.

Pesebre said that the Inquirer Read-Along program helped in enlightening the children on their changing perception in identifying what real heroes were as well as in developing to the younger generation the habit of reading books amid their engrossment to gadgets and television.

On being a modern hero, the Air Force intelligence soldier, who was among the top ten awardees in The Outstanding Philippine Soldiers (TOPS), told INQUIRER.net that every time he is given a responsibility be it huge or small, he accomplishes it with passion and love for work.

The recipient of the Outstanding Police Officer award Senior Police Officer 1 Raquel Aniwasal took the opportunity to make the children feel that every police officer is a “friend” to them and that they “must not be feared.”

Aniwasal, who serves as a Family Juvenile and Gender Sensitivity specialist at Balayan Municipal police station in Batangas, pointed out that parents should not use policemen to “scare” their children.

“Every child has to know that cops are friendly and that people who commit ‘bad things’ are the ones who should be afraid of us,” she said.

The policewoman read a story about a hardworking cop named Patrolman Meow whose efforts were hardly noticed by his superiors but eventually got recognized for his dedication to the service.

She also expressed her love for storytelling since it has become a part of her job, both as a mother and as an officer under the Women and Children’s protection desk.

Reading the story about the legend of Papaya, Outstanding Teacher awardee Cherry Vinluan shared in an interview after the session that the Inquirer Read-Along encourages the kids to read books and acknowledge the talent of Filipinos in writing.

“Sometimes children tend to overlook and ignore the Filipino writers,” she said.

Vinluan, who is the English District Coordinator representing Guagua Elementary School in Pampanga, said that this gave a chance for them to “develop in the children that not all heroes are dead and that even the children, in their own little ways, could be heroes too.”

Veteran storyteller Rich Rodriguez, meanwhile, recounted to the children the story of the EDSA revolution in 1986.

“My goal is to make the delivery of my story enjoyable. I never forget that goal. [I aim] for enjoying while learning,” said Rodriguez, who had been a storytelling of the Inquirer Read-Along for six years.

Asked if how he makes it different from the previous sessions every time he animates a story, he said that he considers elements in storytelling whenever he faces the young audience.

“Personally, it’s the response of the children. Not all of their reactions will be the same. I basically consider the audience, the book that I’ll be reading, venue, comic relief and the interactive approach,” he added.

Rodriguez, who was one of the 2011 Ten Outstanding Young Employees in Metro Manila, pointed out that he sees the development in the children who regularly participates the Read-Along session.

“Watch them before any Read-Along, how come kids go to the shelves instantly? That’s the effect. That’s the impact of the Read-Along and I’ve been seeing that for years,” he said.