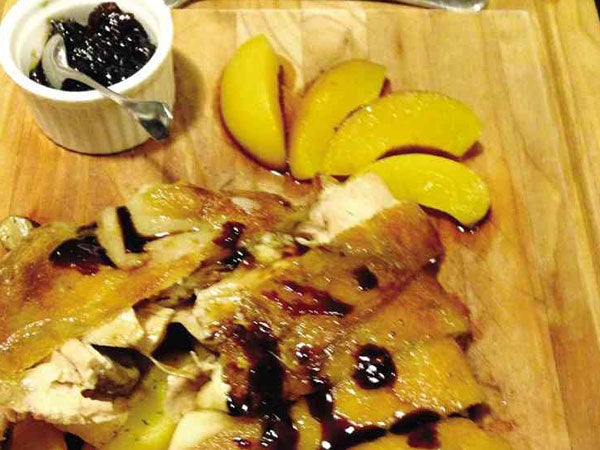 Sometimes you find yourself eating at a restaurant that is so abysmal and so dire beyond redemption, that your entire paradigm of good and bad shifts downward a couple of notches. Restaurants that I had formerly deemed mediocre and unworthy suddenly shine like gilded beacons of culinary excellence by comparison.

Despite what people may think, I write only about restaurants that I like, or those that I wish could be better. And so, as Wittgenstein concluded, whereof one cannot speak, one must thereof be silent. Except to say that we ended up having a second dinner at Las Flores, a few blocks away.

I didn’t write about Las Flores the first couples of times I went, because it seemed more of a bar than a restaurant and I felt it was too chic and overdesigned. It was also full of perfectly dressed people with natural tans and bouncy brown hair sipping their white sangrias from goldfish-bowl-shaped glasses and eating very expensive plates of next-to-nothing, which is what beautiful people tend to eat.

But last week, after plumbing the depths of gastronomic iniquity, we felt we needed a little glamour in our lives. Surprise—the beautiful people had long since flounced away to somewhere more fashionable, so the crowd at Las Flores turned out to be people who looked rather like ourselves, also in search of beautiful people, and equally disappointed to see us instead.

But with the lights turned down low, the décor didn’t seem like too much of a good thing, as it had looked before; and the menu, which had previously felt like a work in progress and a bit of an afterthought to the drinks, had been fully fleshed out. The drinks had been excellent and continued to be excellent, according to my resident expert on all things alcoholic, aka The Wife, though the sangrias were served this time in garden-variety tumblers instead of goldfish bowls.

I don’t know if my judgment was colored by traumatic experience, but the scallop ceviche with thin slices of ham, the plump and piquant gambas sizzling in olive oil and garlic, the little Angus beef burgers (they have a long name in Catalan, but they’re basically Angus beef burgers), and a salted chocolate mousse (again, it goes by a more exotic stripper name on the menu) hit the spot.

Las Flores might actually turn out to be that rare beast, a bar that actually has good food for people like me who don’t drink. I think the beautiful people are missing out.

But the really surprising food revelation of the week was a restaurant that has been around for a while, and I feel a little out of it for only rediscovering it now. We were in a porky mood, given recent political developments, and we needed some cochinilla to chew over the newest revelations.

I had been to Terry’s previously, with twentysomethings who ordered for us and insisted that the flaming pork sausage inside an earthenware pig was the highlight of the menu. I didn’t think much of it then and dismissed Terry’s, the restaurant, as an afterthought offshoot of Terry’s, the deli.

As it turned out, the flaming earthenware pig might be the low point of the menu, a crowd-pleaser that plays to twentysomethings who like the novel value of fire and charred charcuterie.

Why, oh why, would you order a chorizo on fire when there are fresh-shucked oysters on the menu? There’s lengua, there are a variety of interesting croquettes, fabada asturiana, as well as cocido. We had pork, of course, the cochinilla “confit” with peaches. And for dessert, we had a couple of Russian tarts, which actually turned out to be a kind of meringue-less sans rival, absolutely scrumptious.

The tables were well-spaced, the service was knowledgeable when it was necessary, and unobtrusive when we needed the space for conversation. Perhaps it was for the better that I didn’t know about this restaurant the whole year that I spent working at an office just a few doors down the road.

It’s the shock of the not-new: I am aware that I’m beating the drum for two relatively established establishments. Like a lot of other reviewers, I enjoy the thrill of chasing new openings and getting excited about clever new concepts and new dining places, and for this I’m willing to forgive waitstaff still fumbling with the menu or a newly trained chef still trying to find his or her voice in the kitchen. One of the hazards of the job is that I end up eating more bad food than any person should.

But how wonderful it is to discover, or to rediscover, two full-fledged Spanish restaurants in the span of a week, whose menus have been refined and tested and tweaked, their waitstaff confident and solicitous, and the cooking not dulled by boredom but honed by practice. And good food is solace that we may well need for the political maelstrom to come.