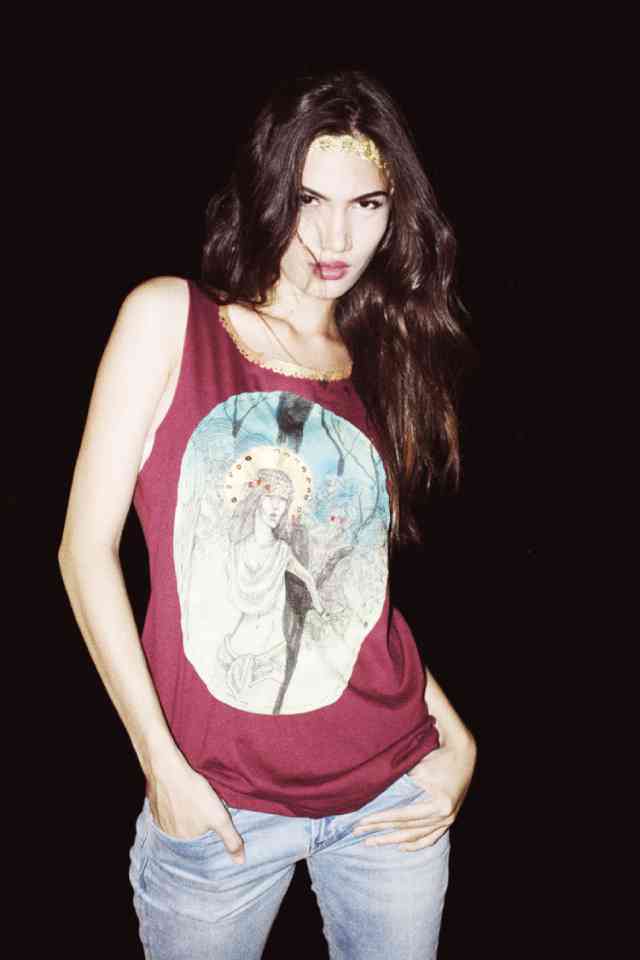 The Filipino Millennials know a thing or two about dressing to express themselves. Some are privileged enough to buy designer labels that cost an arm and a leg. Yet others depend on their creativity to transform a simple shirt into wearable art.

Hilder Demeterio, an Architecture student at the University of Santo Tomas, has come up with a solution that will save teens from having to starve themselves just  to buy wearable art.

The antithesis of his opulent designs, Demeterio is soft-spoken, but once he talks, you feel his passion for design. He uses T-shirts as art channel to convey his vision, to express himself as a young artist.

He is moved by the works of his fashion icons, like the late Alexander McQueen and Riccardo Tisci of Givenchy.

“McQueen’s theatrical haute couture pieces and runways are the zenith of the union of art and fashion, about being inspired and inspiring. This is something I try to do with my works. With Riccardo Tisci, I love the way he uses prints,” said the 18-year-old entrepreneur.

Fashion is just a part of his life. He immerses himself in different activities to enhance the skills needed for his profession. For instance, he is into visual art and filmmaking.

“Anything related to visual delight. Aside from painting, I also sculpt and make films. Another interest is architecture, which I am taking up at UST. They probably aren’t exactly unrelated to fashion, though, since inspiration flows between all of them,” he said.

He hopes to combine the best of all worlds.

Everyone has at least one shirt in his/her wardrobe, one of the must-haves. With this generation’s preference for grunge trends, it has turned the T-shirt into daily uniform.

Demeterio aims to make his designs relevant in the daily lives of his countrymen. Making street-art-inspired shirts connects him to his target audience.

“My primary inspiration for my shirts is street art. Its inspired spontaneity sets the visual feel I want my hand-painted shirts to have. I like making things that look unpolished, yet have some meaning. Other inspirations are other forms of art, and sometimes Philippine culture.”

Demeterio designs his T-shirts the hard way: He hand-paints each one instead of using technology to create designs. This way he creates pieces with intricate and individual meaning to his clients.

“My painting background was what made me decide to use hand-painted shirts as starting point for designing wearable things. Also, my dislike for the mass-produced led me to making artisan one-of-a-kind shirts,” said Demeterio.

Sarcastic, smart, whimsical. These describe describe Demeterio’s designs. He combines street and “baroque” inspirations. He knows how to marry pop icons and political messages. A female saint-like image is an allusion to women of today—a woman not defined by what she wears, but what she adheres to.

“I think references to icons are fun,” he said. “One thing I like to do with my pieces is to communicate something, be it a pun or something more thought-provoking. Pop and political icons expand the language of your art, making it possible to get your message across.”