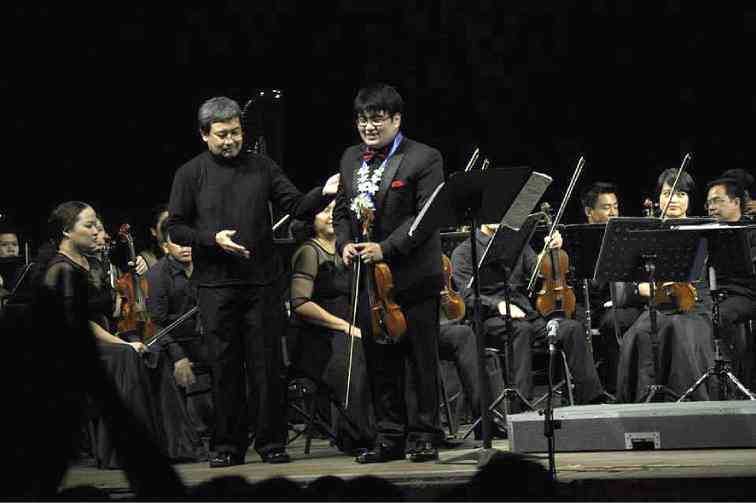 Oliver Salonga triumphs in Chopin No. 2

A highly lyrical first movement, a well-nuanced second movement, and a vibrant last movement characterized Oliver Salonga’s interpretation of Chopin’s Piano Concerto No. 2 in F Minor, Op. 21, with the Manila Symphony Orchestra (MSO) under Arturo Molina at the UP Abelardo Hall last week.

The performance resulted in three encores.

In the same breath, Diomedes Saraza Jr. as soloist in Bartok No. 2 shook the foundation of the Abelardo Hall, and euphoria greeted his encore, Wily Cruz’s “Sana’y Wala Nang Wakas.”

Salonga’s debut performance with the MSO turned into a winner’s concert—for the pianist had just placed third in the recently concluded University of Southern California (USC) Concerto Competition. (He’s a USC doctoral student under   Norman Krieger.)

Earlier, he won the  Sadie Zellen Piano Prize at the Cleveland Institute of Music, where he obtained his Master of Music and Artist Diploma in Piano Performance under the guidance of 2001 Van Cliburn silver medalist Antonio Pompa-Baldi.

After winning the National Music Competition (Namcya) twice, Salonga went on to win a gold medal in the 2008 Joenju International Piano Competition in South Korea.

The Filipino music scholar admitted he was a bit disappointed when he landed third in the USC competition. “But at the end of the day, I didn’t feel I lost anything. For one, I was happy with the work I had put in this concerto, and I discovered how hard it was to play and interpret Chopin. Most importantly, I was pleased with my performance in the finals.”

By now, Salonga has learned to treat competition only as a means to improve his craft and no longer to prove himself to others.

“Competitions are all the same regardless of whether it was held in your home territory or abroad,” Salonga said. “What should count is how you played, how other competitors fared, and how the jurors liked your playing. The winners have qualities that others don’t have, but not all of them have something good to offer. So, in competition, you learn to absorb what is good even among the losing participants. What you have to offer plays a very big factor.

“On top of that, some pieces are easier to pull off compared to others. I challenged myself to offer Chopin even if I knew I could have offered Rachmaninoff or Liszt. I believe, and still believe, that I have a strong affinity and concept on how Chopin should be played.”

The MSO under Molina resumes its fourth season concert with “Verdi’s Opera Extravaganza,” which opens on Sept. 14, 8 p.m.,  at the BDO Francisco Santiago Hall with soprano Camille Lopez Molina and baritone Noel Azcona, with the Viva Voce.