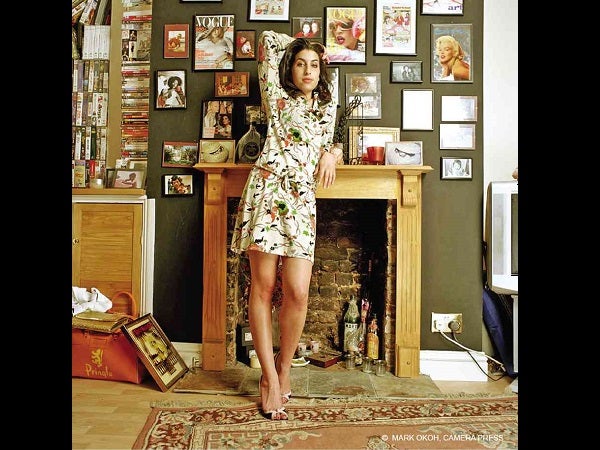 AMY at home in 2003. PHOTO BY MARK OKOH/CAMERA PRESS

I first posted the poster as I was getting out of a tube station in London. It was pink, with a picture of Amy Winehouse and the words “Amy Winehouse: A Family Portrait,” announcing the ongoing exhibit at the Jewish Museum.

Hours later, while rifling through piles of records at an old shop in Camden, there it was again—Amy’s face on pink paper, this time a flyer. I picked it up and the significance of the timing of my visit hit me: “This September, Amy would have been celebrating her 30th birthday.”

All throughout this month, events would be held all over Camden to celebrate the late singer-songwriter’s birthday— gigs, fairs, pop-up shops, walking tours, a “Back to Black” tribute show, even a bowling night. I wasn’t going to be in town for most of them, but I could make it to the exhibit.

Two years ago, while leaving the Cultural Center of the Philippines after a movie screening, I checked my phone and got the news that Amy had been found dead in her home in Camden. I felt like I had been punched in the gut. A lot of people claimed not to be surprised. To them, it was the expected end to the life of a drug-addled artist who had fallen apart right before their eyes. To me, it was a tragedy.

The tabloids showed a struggling Amy, an Amy battling many demons—face smeared with makeup, skin scratched up and bloody, eyes glazed by substance abuse. But the Amy in my ear  phones was always pure magic. She was both powerful and vulnerable, heartbreakingly honest and funny, an incredibly gifted singer and songwriter whose music touched me to the very core.

Two years after her death, that still hasn’t changed.

And that is why, last Sunday, I walked into the Jewish Museum on Albert Street in Camden Town, ready to spend the rainy morning with Amy.

“Back to Black” greeted me as I entered, and I felt goose bumps instantly. There were four floor-to-ceiling screens at the museum’s foyer—on three of them were slideshows of Amy’s pictures while the fourth played Amy’s live performances.

A few steps away, enclosed in a glass case, was the Arrogant Cat gingham dress and Fred Perry belt Amy wore in the “Tears Dry On Their Own” video.

In the video, the dress, which is said to be one of Amy’s favorites, looked pretty, its skirt flirty and flouncy. But there, on the mannequin, it looked sad, like it was missing its owner.

I looked down at the ballet flats Amy had also worn in the video and the image of her blood-spattered pumps flashed in my mind.

Upstairs, on the third floor, the words of Alex Winehouse, Amy’s brother who cocurated the exhibit with his wife Riva, greeted visitors: “This is not a shrine or a memorial to someone who died. This isn’t an attempt to tell people what my sister was like… This is a snapshot of a girl who was, to her deepest core, simply a little Jewish kid from North London with a big talent who, more than anything, wanted to be true to her heritage.”

I spent the next two hours losing myself in Amy’s world.

There was a big family tree tracing Amy’s Jewish roots. On display were photos of her family, her grandparents and her ancestor who should have gone to New York but mistakenly ended up in London.

There was also the Jewish cookbook her brother gave her in 2002 because Amy wanted to learn how to make chicken soup; Amy’s primary school uniform—the tie still had its label intact. “Amy Winehouse,” the tiny letters read. I saw the same label again on her school tracksuit, which was also on display.

There was a video of a young Amy in a performance at the Sylvia Young Theatre School. Even then, she stood out. It was hard to believe that big voice was coming from such a small girl.

There was likewise a clipping from a newspaper with Amy’s audition info filled in and her tap shoes, which she kept long after she left school.

Excerpts from the essay she wrote for the Sylvia Young Theatre School were printed on the exhibit walls:

“All my life I have been loud, to the point of being told to shut up. The only reason I have to be this loud is because you have to scream to be heard in my family… I’ve been told I was gifted with a lovely voice and I guess my dad’s to blame for that. Although unlike my dad, his background and his ancestors, I want to do something with these talents I’ve been ‘blessed’ with.”

Amy’s vinyl collection was displayed, with a note from Alex: “We got a love of vinyl from our mum and would both—separately—spend hours in record stores around Camden digging out old classics.” A closer look at Amy’s CDs and records showed that while she loved the classics—Ray Charles, Ella Fitzgerald and Dinah Washngton, Aretha Franklin, Duke Ellington and Tony Bennett—she also listened to Beck, Velvet Underground, Snoop Dog, DJ Jazzy Jeff and Beyonce. She even had an Adam Sandler CD.

There was a playlist that Amy wrote when she was still in school, which she called “Songs on my chill-out tape.” It was played on repeat at the exhibit. Alex said that although Amy had written the list when she was young, her favorites did not change. Carole King’s “So Far Away” was the most poignant of these songs—a family favorite that was played at Amy’s funeral.

On exhibit, too, was Amy’s most treasured guitar, which Alex called “the worst musical instrument ever made,” saying “it sounds awful, isn’t very attractive, and the fret board is smooth as gravel.” Amy wrote a lot of songs on it and kept it “even when she could afford much better guitars.”

Amy kept the wristbands and passes to a lot of her gigs and performances, and there was a spread of them at the museum.

Exhibit visitors also got a look at some of the contents of Amy’s closet: the tiny blue Luella dress Amy wore to Glastonbury in 2008; the Betsey Johnson dress she wore on her US TV debut; a Patricia Field T-shirt dress; an American Apparel top; scarves and shoes from YSL, Louboutin, Fendi, Ferragamo and Miu Miu.

But, according to Alex, although different brands would give Amy tons of clothes (Adidas filled her wardrobe), her favorites were the clothes she wore around the house, “jogging bottoms, T-shirts and manky bras.”

There was a blown-up version of her Rolling Stone magazine cover and the Grammy that she won posthumously for “Body and Soul,” her duet with Tony Bennett—the sixth Grammy of her short-lived but fruitful musical career.

While it was fascinating to see documents of her stardom, it was the ordinary things that really stood out—the things that made Amy just like you and me: her collection of fridge magnets, a lot of which were funny and came from Florida (interestingly, she had two of one magnet that read, “I don’t suffer from insanity. I enjoy every minute of it.”); her love for sudoku and word puzzles, which she kept in a wooden chest; the books she read as an adult (“Dear Bunny, Dear Volodya: The Nabokov-Wilson Letters, 1940-1971,” Alfred Hitchcock’s “Ghostly Gallery,” Hunter S. Thompson’s “Kingdom of Fear,” Glen David Gold’s “Carter Beats the Devil,” Charles Bukowski’s “Notes of a Dirty Old Man,” Marina Lewycka’s “Short History of Tractors in Ukranian,” a book on serial killers); and the books she loved as a child (“Snoopy Stars,” Dr. Seuss’ “Hop on Pop, Green Eggs and Ham” and “How the Grinch Stole Christmas,” John Cunliffe’s “Postman Pat’s Breezy Day”). The Snoopy Stars as Fitness Freak book was a gift for Alex from their mother, but Amy stole it from him. Alex said he took it back after she died and he always carries it with him.

There was a map of Amy’s London—a highlight of which was Camden, which Amy was determined to move to even as a young girl, where she lived for years, and where she eventually died.

At this exhibit, there was no presence of drug addiction, no alcohol, no bulimia, no messy love affairs, no visits to prison. There was only Amy the dreamer, the student, the family girl, the daughter, the sister, the remarkable talent.

One of the last things visitors would see is a battered suitcase full of photographs, a lot of which were swiped by Amy from family members. Amy was said to have been looking through those photographs in the days before she died.

One wall of the exhibit was covered with messages from Amy’s fans. I wrote my own, as The Mamas and the Papas sang “Dream a Little Dream” in the background.

When I returned to the ground floor, Amy was once again singing “Back to Black.” I walked out of the museum, her voice cut by the closing door. I whipped out my iPod, clicked on my oft-played Amy Winehouse playlist to accompany me as I walked around her beloved Camden. The messages from Amy’s adoring fans were still fresh in my head: “Thank you for changing my world,” “Thank you for the anthem of my heart.”

In the end, Amy got her dream, expressed in an essay she wrote when she was 13 years old: “I want people to hear my voice and just … forget their troubles for five minutes.”