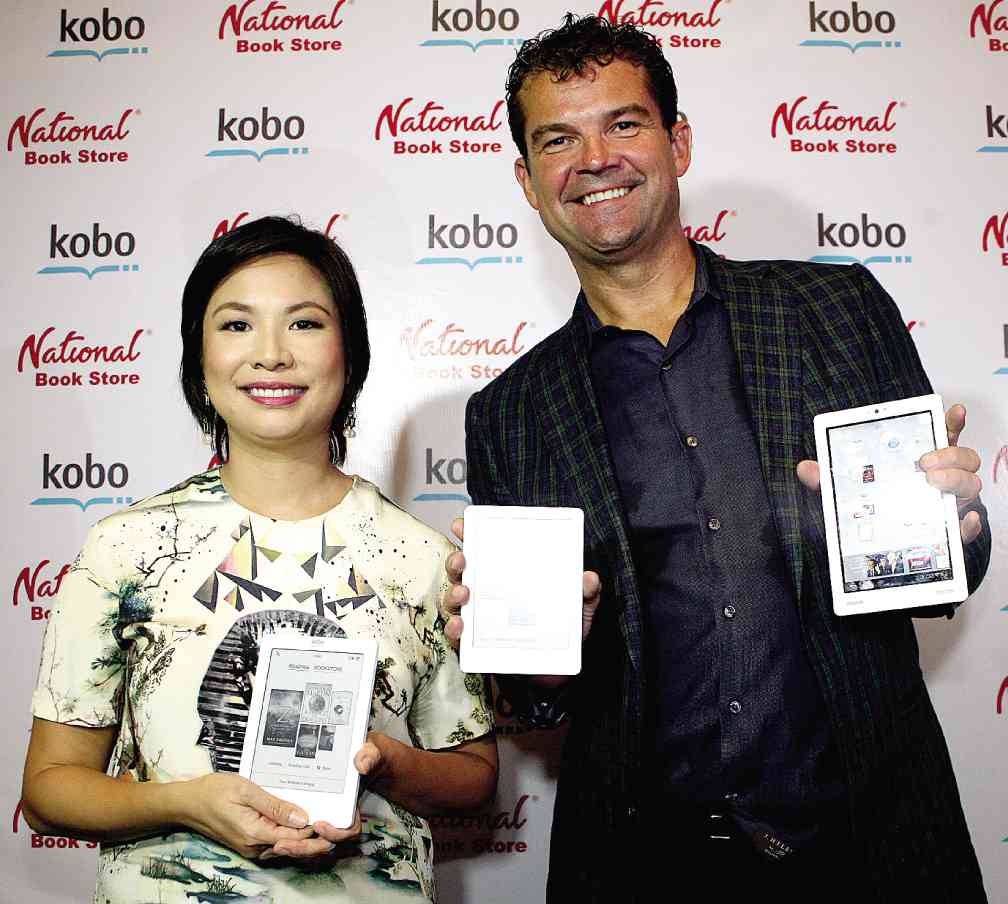 XANDRA Ramos-Padilla and Todd Humphrey at the KOBO Launch in Raffles Hotel,Makati. INQSnap this page (not just the logo) to view more photos! KIMBERLY DELA CRUZ

It’s really a tiny thing, but it represents the biggest of plans.

Pretty much the same size of a paperback book, the Kobo Glo e-reader has a front-lit 6” black-and-white touch screen, as thin as a magazine, weighing barely 185 grams. But the device symbolizes the big picture for retail pioneer National Book Store.

In an intimate launch last Sept. 10 at the Writer’s Bar at Raffles Makati, National Book Store announced it had entered into a partnership with Toronto-based e-reader maker Kobo Inc. to bring National squarely into the digital era.

Host Daphne Oseña-Paez described it as “a partnership that would revolutionize reading in the Philippines.”

For generations of Filipinos, the word “National” is synonymous with the country’s dominant bookstore chain. Yet in the 21st century, the chain is also known primarily as a brick-and-mortar store, a place you physically go to in order to buy physical books we Filipinos are accustomed to.

The partnership with Kobo aims to transform that premise, beginning Sept. 20.

National’s purchasing director Xandra Ramos-Padilla emphasized that the initiative does not mean National is getting out of the physical books market. Quite the contrary, she said. “We are still National Book Store, still selling books, our stores are still full of books, ” Padilla said. “We’re still printing and publishing books, but we can now offer books in a new form that’s very handy.”

National will offer e-books through Kobo’s bookstore, making both foreign and local titles available to the Philippine market.  Kobo e-readers will also be introduced to Filipino titles.

The launch was the culmination of a three-year search for the right digital partner.

“We wanted a partner that would help us be better,” Padilla said.

Kobo (anagram for “book”) vice president for business development Todd Humphrey said the Philippines “is an important market for us” because of “the sheer size of the market.” “The population loves to read, and reads more than one assumes,” he noted.

He explained that when Kobo was looking for a partner in the Philippines, the only name they kept hearing was “National.”

Similarly, National’s marketing director Miguel Ramos said that while the bookstore was was looking for a digital partner, “people kept saying, ‘Go talk to Kobo.’”

Having released its first e-reader in 2010 and last year been acquired by Japanese business giant Rakuten, Kobo offers some 4-million e-books in 68 languages. Humphrey said that Kobo is, in fact, “exclusively driving that e-reading experience for consumers.”

It has 16 million readers in 190 countries, and prides itself on being able to offer “any piece of content on any device anywhere in the world.” After all, Kobo’s reading app enables readers to read e-books on smartphones and tablets.

But the touchstone of the Kobo arrival is the three e-readers which will be available at selected National Book Store and Powerbooks branches on Sept. 20. (Interested customers can now go and reserve their devices at the branches.)

The biggest challenge for National and Kobo is to convince a readership raised on physical books to switch to digital titles. The two companies said they understood this would be a long-term process.

But Humphrey stressed that physical books “are not going anywhere.” Kobo aims to be complementary to the physical reading experience, he added.

For National, the tie-up with Kobo clearly represents the next step in the company’s development, from the tiny Escolta stall manned by Jose and Socorro Ramos, to the ubiquitous chain it is today.

The Kobo partnership is the boldest, most significant step National has taken since establishing local publishing heavyweight Anvil Publishing, Inc., in 1990.

Even as it enters the realm of digital retailing, National will continue to expand its bookstore empire. Aside from the 150 stores it operates, the chain intends to open six more physical stores in 2013, said Padilla.

“My dream is to digitize the Filipino classics,” she said.