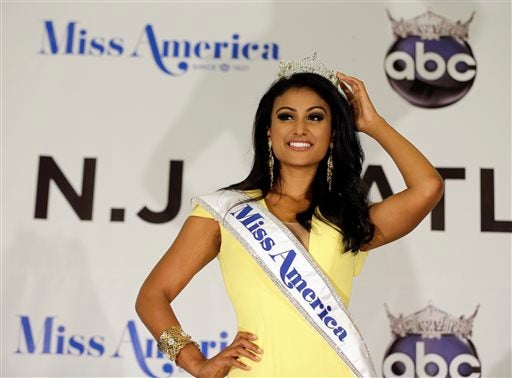 US wakes up to a Miss America of Indian descent

NEW YORK CITY — For the first time America’s top beauty queen is a woman of Indian origin, and she is playing down racist tweets that say she looks like an Arab terrorist.

The new Miss America is Nina Davuluri, a 24-year-old from the state of New York who wants to be a doctor.

She called her crowning Sunday night at the Atlantic City pageant in which she performed a traditional Bollywood dance a victory for diversity in America.

“It was the first time Bollywood has been performed on the Miss America stage. It’s an honor for myself and my community,” Davuluri told ABC television Monday morning.

“Halfway through, I just started crying because you know, it was such an incredible experience being on that Miss America stage,” she said. “It was so meaningful and powerful.”

Davuluri is beaming despite a spurt of racist tweets about her. She downplayed them, however.

“I have to rise above that,” she said at a news conference Sunday night after being crowned. “I always viewed myself as first and foremost American.”

Many described the beauty queen, who is believed to be a practicing Hindu, as an Arab who looks like a terrorist.

A user with the handle @emi_adkins said “It’s called Miss America. Get outta here New York you look like a terrorist. #bye #americanforamerica.”

Lue Brasili exclaimed “9/11 was 4 days ago and she gets miss America,” while user Karl Sharro said “Al-Qaeda influenced the liberal judges.”

Others, like the Jezebel feminist blog, denounced the comments, saying “racists are being racist because Miss America isn’t white.”

“This world is so ignorant. #MissAmerica Indian or not had every right to gain the title of MissAmerica. This is why I want to leave America!” chimed in @CJlovebug.

Davuluri competed on the platform issue of “celebrating diversity through cultural competency.”

“I’m so happy this organization has embraced diversity,” she said at the news conference. “I’m thankful there are children watching at home who can finally relate to a new Miss America.”

During her 2014 year of service as Miss America, she will travel extensively to speak to audiences about her chosen issue.

Along with her much-prized title, Davuluri won a $50,000 scholarship to pursue her education.