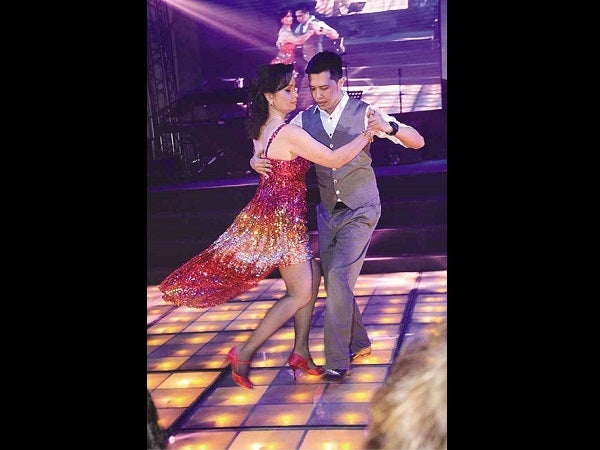 DANCING the tango with Jay Jarana in an Ito Curata outfit

For Margie Moran Floirendo, 60 is really the new 40

When she celebrated her birthday two Saturdays ago at Whitespace, Floirendo announced her age with pride.

“I contemplated that for a whole year. I was excited to turn 60,” she says.

The media has been harping on 60 as the new 40. In a survey conducted by the UK Daily Mail, respondents set down age 66 as “old,” not 60. At 60, many of them said, they felt they were in their best financial and physical shape ever.

The Daily Telegraph also describes “60” as the time for “late-life epiphany” and “the age of creative renewal.”

“The joke used to be that life began at 40, but it seems like it really gets going at 60,” says the Daily Mail.

“Turning 60 is one of the most exciting things to experience because I feel confident,” says Floirendo.

She recalls how her grandmother had a younger lover, and how her mother didn’t slow down at that age.

“When you say 60 is the new 40, you can be youthful in your mind, but not physically,” says Floirendo.

Still, she prepared for her big to-do. “I didn’t want to look heavy-duty.”

The former dancer took private ballet lessons for three months at Arts in the City to shape up for her number in her party.

She went on the HcG diet, which restricts calories to 500 a day. Floirendo lost 15 lbs, and became trim enough to fit into a body-hugging Hervé Léger.

She admits she’s still trying to cut down on her carbohydrates, sugar and salt, as she girds for her daughter’s wedding.

Monica Floirendo, a culinary consultant, and banker Keenan Ugarte will tie the knot in January in the family-owned Pearl Farm.

She admits that she has tried minimally invasive procedures such as stem-cell technology with dermal fillers.

“Maybe when I’m 65, I will look 60,” she says with her trademark girlish giggle.

At her party, baby boomers forgot about midlife and relived their youth in the sparkling disco days of the ’70s. The event’s highlight was a mock restaging of her coronation in the Miss Universe Pageant in Athens, Greece.

In her life, Floirendo has worn many crowns of responsibility—as a tourism executive, producer, writer and humanitarian, among others.

Her career largely depended not so much on her youthful appearance as on her leadership skills.

When she became president of the 44-year-old Ballet Philippines, the company grew in size, attracted bigger audiences and raised more donations and revenues. Plans are afoot to improve the housing program for dancers and build another studio.

Upon the invitation of Fernando Zobel de Ayala, chair of the Habitat for Humanity (HFH) Asia-Pacific Capital Campaign, Floirendo has also been working as a trustee of the campaign.

“He asked me to help in the Youth Build volunteer group,” recalls Floirendo, who was in her mid-40s when she joined HFH, an international nonprofit organization that provides affordable housing for the poor.

She witnessed how, in a decade, projects grew from 200 houses built to 5,000 houses a year. HFH works with the Department of Social Welfare and Development to give shelter to Filipinos living in danger zones.

Since the Floirendos own agricultural businesses and ports in Mindanao, she focused on areas that have been devastated by calamities.

Some 6,000 houses will rise in Cagayan de Oro after the onslaught of Typhoon Pablo. In Compostela Valley, Davao Oriental, HFH assisted victims of Typhoon Bopha.

Floirendo adds, “As part of the rehabilitation and peace process, we got funding from the European Union. We built houses in post-conflict areas.”

She says HFH has been very transparent with donors and the DWSD. “We make sure they visit the communities to see where their money went.”

Floirendo continues to work for the support of agencies, DWSD and private donors, for capital and land. She’s encouraged her daughters to volunteer to help build houses or raise funds.

“I merely serve as a catalyst,” she says.

As women’s issues are close to her heart, Floirendo is the chair and a founding member of the Mindanao Commission of Women (MCW), an nongoverment organization that works to foster harmony among Muslim, Christian and tribal woman leaders in the region.

“We’ve been teaching women how to confront feuds and establish peace in their communities,” she says.

One of its most successful programs was the “Mothers for Peace” campaign in 2003, which crusaded for nonviolence and drew attention to the plight of civilians, especially women and children in war-torn areas of Maguindanao.

Floirendo was at the forefront of this campaign, collaborating with Archbishop Orlando Quevedo and Tabang Mindanao, an NGO. After three months of intense media campaign, the Armed Forces of the Philippines and the Moro Islamic Liberation Front declared a ceasefire.

One result was when Tarhata Ibrahim, Nur Misuari’s second wife, successfully organized a women’s program after a peace agreement.

The former beauty queen certainly knows how to balance substance and style. A few days after her disco party, Floirendo flew to Davao for an HFH fund-raising activity at Abreeza Mall.

While busy with travel, tango lessons and socials, she finds time to listen to lectures on meditation.

“At this age, you’re more aware that you have to live life to the fullest,” she says.