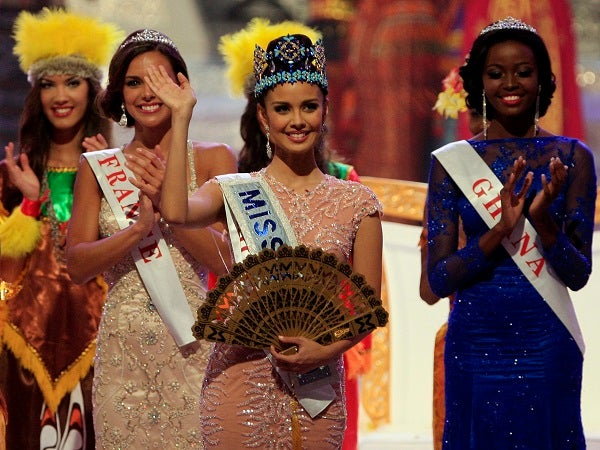 BALI, Indonesia—Miss Philippines, Megan Young, was crowned Miss World in a glittering finale on the Indonesian resort island of Bali on Saturday.

“I promise to be the best Miss World ever,” Young, 23, said after winning the 63rd annual event, as a large number of Filipino fans who traveled with her celebrated by jumping and waving the country’s flag.

“Salamat sa mga kababayan ko. Mahal na mahal ko kayo (Thanks to my compatriots. I love you very much),” said the teary-eyed actress after she was crowned on Hindu-majority Bali at the end of a three-week contest.

Young, wearing a pearl white gown,  bested 126 beauty queens from around the world to become the first Filipina to win the coveted title in a contest broadcast to more than 180 countries worldwide.

The 127 contestants vying for the crown were introduced Saturday wearing evening gowns shimmering in sequins, many of them with plunging necklines and slits up the leg. Four candidates dropped out earlier, mainly due to illnesses, said Syafril Nasution, one of the local organizers.

Young, who took the crown from Wenxia Yu of China, the 2012 winner, was born in the United States. When she was 10 she moved to the Philippines, where she has appeared in films and as a television host.

She thanked the judges for choosing her and pledged to “just be myself in everything I do, to share what I know and to educate people.”

To the question “Why should you be Miss World?” Young answered, “I treasure a core value of humanity and that guides people why they act the way they do. I will use this to show other people how they can understand each other … as one, we can help society.”

This is the first time the Philippines has won a Miss World title crown in the 63-year history of the London-based pageant.

The country has won the Miss Universe title twice, Miss International four times, Miss Earth once and Miss Supranational also once, this year.

The closest the Philippines came to win the Miss World title before were in 1973 with Evangeline Pascual and in 2011 with Gwendoline Ruais.  Both finished first runner-up.

Indonesia’s government announced three weeks ago that the finals would be moved from the outskirts of the capital, Jakarta, and instead held on the Hindu-dominated resort island of Bali, where earlier rounds were taking place following protests by Muslim hardliner groups.

In a bid to reduce hard-line anger, organizers also took an early decision this year to axe the famed bikinis from the “beach fashion” round, replacing them with Balinese sarongs. But pressure continued to mount, and more mainstream groups joined in and called for the show to be banned.

Despite threats from the Islamic Defenders Front to disrupt the pageant, police said no rallies were staged Saturday. The group has demonstrated for weeks, calling for the government to cancel the pageant because members say it shows too much skin and goes against Islamic teachings.

Hundreds of police were deployed across Bali for Saturday’s final, which saw contestants clad in stilettos and shimmering gowns take to the stage in the Nusa Dua resort, southern Bali.

The contestants were quickly whittled down to six. Then, they faced a question-and-answer round before the winner was announced.

Young, who is studying digital media and also presents TV shows in the Philippines, entered the semifinal round with the highest score based on preliminary activities.

Just a day before the coronation night, the Miss World Organization announced on its official website that Young topped the “Top Model” competition, placed fourth in the “Multimedia Challenge” and fifth in the “Beach Beauty” contest.

Others who made it to the Top 6 were Brazil’s Sancler Frantz who won the Beach Beauty competition, Spain’s Elena Ibarbia, and Gibraltar’s Maroua Kharbouch, who advanced by amassing the highest number of public votes.

Young’s proclamation as the new Miss World came just weeks after her coronation as the country’s official representative to the global competition.

She was a clear favorite in the 2013 Miss World Philippines pageant and bested 25 other contestants in the finale held Aug. 18 at the Solaire Resort and Casino.

Young was just as impressive in the international competition. During the opening press conference, she joined 2013 winner Yu Wenxia of China and Miss World owner Julia Morley in addressing the media delegation. Eight other international representatives joined the Philippines’ bet.

The American-Filipino TV personality also earned a spot in the “Dances of the World” segment for the final telecast, where only a select few contestants were chosen.

A total of 129 contestants had been due to compete in the final, but two pulled out at the last minute, according to organizers.

While the popularity of Miss World, first held in 1951, has waned in the West, continued interest in Asian countries ensures that the final rakes in a huge global television audience.

Venezuela has produced the most Miss Worlds, with six winners, while India and Britain claim five titles each. With Armin Adina, Inquirer; Agence France-Presse